Suicidal Ideation in Bereavement: A Systematic Review
Next Article in Special Issue

Caregiver Reports of Screen Time Use of Children with Autism Spectrum Disorder: A Qualitative Study
Previous Article in Journal

The Cognitive Profile of People with High-Functioning Autism Spectrum Disorders

Steroid Metabolites Support Evidence of Autism as a Spectrum

Autism spectrum disorder (ASD) comprises a group of disorders characterised by persistent deficits in social communication and social interaction and restricted patterns of behaviour, interests and activities [1]. The aetiology of autism is not well understood, although it is thought to involve genetic, immunologic and environmental factors [1,2,3,4,5,6,7,8,9,10,11,12]. The diagnosis of autism is still based solely on behavioural characteristics as there is currently no biological marker [13]. In ICD-10 (International Classification of Diseases, 10th Revision) from the World Health Organisation (WHO), the premise of autism as a spectrum was adopted overcoming the previously widely used diagnoses of Kanner Syndrome respectively early-infantile autism (F84.0) and Asperger syndrome (F84.5).
Consensus was reached that autism was regarded as a spectrum with the former diagnosis of Asperger syndrome being a mild entity and Kanner syndrome a severe one. These former diagnoses are nowadays given less attention, however still lots of affected individuals having these diagnoses. Clinical evidence supports the premise of Asperger’s disorder as a mild form of autism sharing a common aetiology and developmental neuropathology with autism [14]. Involvement of epigenetic mechanisms, linking genes with the environment, was suggested by studies conducted on lymphoblasts from siblings with non-conforming autism diagnoses. They showed increased expression of genes associated with steroid biosynthesis in brain development [15]. From a more comprehensive standpoint, some studies suggest an involvement of the corticotropin-releasing hormone (CRH)-adrenocorticotropic hormone (ACTH) system with additional alterations of adrenal gland metabolites in autistic disorders [16,17,18,19,20,21].
The regulation of proangiogenic factors was investigated in adrenocortical cells isolated from human foetal adrenal glands for a more comprehensive understanding [22,23,24]. ACTH up-regulates vascular-endothelial growth factor–A (VEGF-A) and increases mRNA encoding of angiopoietin 1 (Ang1) whereby indicating that ACTH is the primary regulator of adrenal organ growth by stimulating VEGF and thus angiogenesis allowing to link the hypothalamic-pituitary adrenal axis (HPA-axis) with adrenal gland development [22,23,24].
To broaden our understanding it should be mentioned that higher rates of clinical manifestations of androgen-related conditions (e.g., polycystic ovary syndrome, hirsutism, acne and hormone-related cancers) were more often reported in populations with autism spectrum conditions (as clinical correlates of hyperandrogenism) compared to healthy non-autistic populations [25]. In particular, the relevance of testosterone for developmental disorders was shown for children from hyperandrogenic mothers with polycystic ovary syndrome (PCOS), increasing the risk of pervasive development disorders [26]. Especially prenatal androgen exposure was suggested to influence mental health leading to studies on psychiatric morbidity among individuals with congenital adrenal hyperplasia (CAH, the inherited inability to synthesie cortisol) [27]. Interestingly, individuals with 21-hydroxylase deficiency have an increased risk of psychiatric disorders with the highest risk among those with the most severe genotype and co-occurrence of CAH and autistic disorders [28]. Further evidence can be derived from animal models where it was shown that maternal hyperandrogenism during pregnancy increased the susceptibility of the foetus to autism spectrum disorder (ASD). In particular, the intrauterine environment played an important role in the development of ASD [29]. Despite these facts, drugs directly affecting the adrenal gland were suggested to improve clinical symptoms. Bradstreet et al. (2006) used Spironolactone as a desirable immunologic and hormonal intervention in ASD [30]. Recent work looking at the development of autism during gestation and childhood suggested that the placenta is capable of synthesizing sex steroids de novo from maternal substrates (cholesterol), maternal or foetal prohormones and steroid precursors [31]. Active steroids produced in the placental unit can be released into both the maternal and foetal compartments to maintain pregnancy and allow foetal development. In addition, endocrine disrupting compounds may be another source of environmentally mediated influences on the early foetal hormonal milieu and a predisposition for the development of autism [32]. Xu et al. (2015) studied the link between pre-term concentrations of adrenal hormones and behaviour. The authors found that female rats treated with androgens spent less time in social interaction in adolescence and exhibited impaired heterosexual interaction in adulthood. Furthermore, the duration of social and heterosexual interaction of female offspring was negatively correlated to maternal serum testosterone levels during pregnancy [29]. In summary, there seems to be clear evidence for a link between increased gonadal adrenal sex steroids (particularly testosterone, estradiol, dehydroepiandrosterone sulfate and androstenedione) in individuals with autism and autism-relevant behaviour, which implies that greater postnatal testosterone levels in early infancy are predictive of more male-typical behaviour later in life [25,33,34,35] Previous work on metabolite levels clearly showed the effects of testosterone on phenotypic variability related to autism. Foetal testosterone influenced individual differences in the typical development of eye contact, size of vocabulary, restriction of interests, mentalizing, empathy, attention to detail, urge to systemise, and autistic traits [36].
In summary, broad evidence exists for an involvement of adrenal gland metabolites in ASD, whereby patterns of severity might vary in individuals with Asperger compared to Kanner syndrome. This leads us to the aim of this study, which was to analyse the degree of involvement of adrenal gland metabolites and adrenal gland enzyme activities (21-hydroxylase, 17-hydroxylase and 11 beta-hydroxylase) in children with Asperger and Kanner syndrome. We hypothesised that adrenal gland metabolites and enzyme activities were altered to a larger extent in children with Kanner syndrome compared to Asperger syndrome [37].

All procedures performed in studies involving human participants were in accordance with the ethical standards of the institutional and/or national research committee and with the 1964 Helsinki declaration and its later amendments or with comparable ethical standards. The study was approved by the governmental ethics board of Graz, Austria, and registered at ClinicalTrials.gov. Involvement in the study was voluntary and not compensated. After study procedures had been fully explained, the parents of the participants read and signed informed consent forms. Autistic and control boys were recruited from the area of Leipzig (Austria). Enrolment took place from mid-2009 to mid-2012. All participants were Caucasians. Participants were excluded if they had a neurological and psychiatric disorder other than autism and comorbid disorders, a history of liver diseases, renal or endocrine disorders, a current infection, or fever. Mental retardation or behavioural disorders were exclusion criteria only for the control group but were allowed as comorbid conditions in the autistic group. The diagnosis was given in the first years of life of the children according to the diagnostic criteria of the DSM-IV and was cross-checked by experienced clinicians (medical doctors and/or psychologists) during enrolment of the study. Key criteria such as the extent of language impairment were used in order to distinguish between Kanner’s syndrome and Asperger syndrome [38](A further tool used to increase the accuracy of diagnosis was the Marburg questionnaire for Asperger syndrome (MBAS).

Analysis of urinary steroids was conducted via gas chromatography–mass spectrometry. Urine samples were taken between 7 a.m. and 9 a.m. in the morning after breakfast. Urine sample preparation comprised pre-extraction, enzymatic hydrolysis, extraction from the hydrolysis mixture, derivatization, and gel filtration [39,40,41]. The recovery standard was prepared by adding 2.5 µg of medroxyprogesterone to 1.5 mL of urine. The sample was extracted on a Sep-Pak C18 column (Waters Corp., Milford, MA, USA), dried, reconstituted in a 0.1 M acetate buffer, pH 4.6, and hydrolysed with a powdered Helix pomatia enzyme (12.5 mg; Sigma Chemical Co., St. Louis, MI, USA) and 12.5 µL of β-glucuronidase/arylsulfatase liquid enzyme (Roche Diagnostics, Rotkreuz, Switzerland). The resulting free steroids were extracted on a Sep-Pak C18 cartridge. A mixture of internal standards (2.5 μg each of 5α-androstane-3α, 17α-diol, stigmasterol, and cholesterol butyrate, and 0.15 μg of 3β5β-tetrahydroaldosterone) was added to this extract, and the sample was derivatised to form the methyloxime-trimethylsilyl ethers. Analyses were performed on a Hewlett-Packard gas chromatograph 6890 (Hewlett Packard, Palo Alto, CA, USA) with a mass selective detector 5973 by selective ion monitoring (SIM). One characteristic ion was chosen for each compound measured. The derivatised samples were analysed during a temperature-programmed run (210–265 °C) over a 35 min period. The calibration standard consisted of a steroid mixture containing known quantities of all steroid metabolites to be measured. Responses and retention times were recorded regularly. In each case, the ion peak was quantified against the internal stigmasterol standard. With this method, the most relevant metabolites of the glucocorticoid synthesis pathway were measured and presented. All results were adjusted for creatinine in urine to check renal function.

SPSS Version 21 and Microsoft Excel were used to analyse all data. A Student’s t-test was performed to compare the means of data from two groups. Results where p < 0.05 were considered significant. Data were analysed for normal distribution with a Jarque–Bera test, whereby the hypothesis of a normal distribution, at p < 0.1 for all samples, could not be rejected. Correlations between different metabolites and between classes of metabolites were calculated. Enzyme ratios and demographic data are presented as standard error of mean ± standard deviation. Clinical data are presented as mean ± SEM. Calculations were made with GraphPad Prism (GraphPad Software, Inc., La Jolla, CA, USA) and Microsoft Excel (Microsoft Inc., Redmond, WA, USA).

We thank all families and their children, who took part in the study, for their commitment to supporting our efforts in resolving the enigma of autism spectrum disease.

Funding sources had no involvement during the whole research process including the decision for publication. 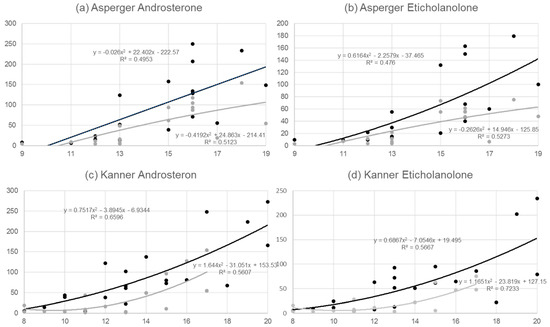 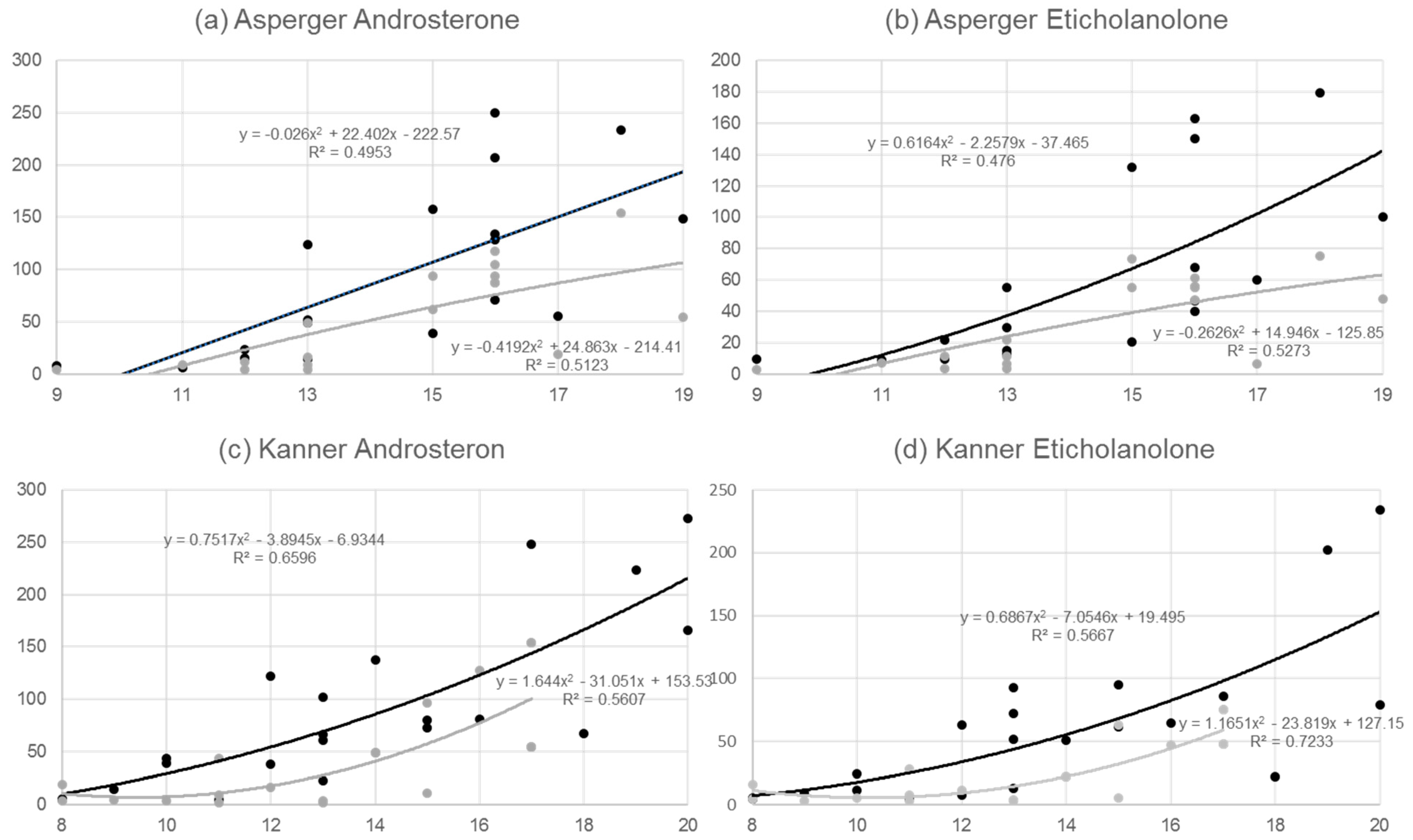