The Role of Family Relationships in Eating Disorders in Adolescents: A Narrative Review
Previous Article in Journal

Empirical research has stated that Attention Deficit Hyperactivity Disorder (ADHD) might underlie intimate partner violence against women (IPVAW) perpetration. Even though there is a clear relationship between these two variables, it is still unknown how ADHD facilitates violence proneness. In this regard, psychophysiological variables such as skin conductance levels (SCL) might offer information about emotional regulation when individuals cope with stress. Furthermore, alexithymia traits might be a strong candidate in explaining the above-mentioned emotional dysregulations. Hence, we compared the SCL response to acute cognitive stress in IPVAW perpetrators with and without ADHD symptoms to that of controls (non-violent and unaffected), and we also assessed the presence of alexithymia traits and their role in emotional regulation. Our data point out that ADHD IPVAW perpetrators presented higher SCL and negative affect than controls, particularly during the recovery period. Moreover, ADHD IPVAW perpetrators showed higher self-reported alexithymia, and this variable was a good predictor of autonomic and psychological state dysregulations, even after controlling for the effects of alcohol and drug misuse. Therefore, our study reinforces the need to consider psychophysiological measurements when screening the therapeutic needs of IPVAW perpetrators, due to their relatively low cost and the significant contents of their results. Finally, we also highlight the key role of alexithymia in this violent population, which should be considered when designing cognitive intervention training coadjutant to current psychotherapies for IPVAW perpetrators. View Full-Text
Keywords: acute stress; heart rate; intimate partner violence perpetrators; pre-ejection period; trier social stress test; vagal tone acute stress; heart rate; intimate partner violence perpetrators; pre-ejection period; trier social stress test; vagal tone
►▼ Show Figures 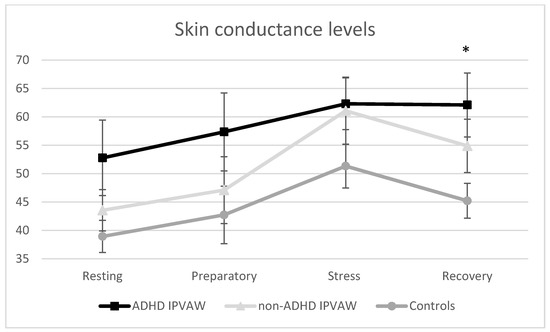