The Relationship between Self-Compassion and Sleep Quality: An Overview of a Seven-Year German Research Program
Next Article in Special Issue

Deficits in executive functioning have been associated with aggressive and violent behavior toward intimate partners. However, it is unclear what specific mechanisms are being affected by cognitive deficits that increase an individual’s tendency to become aggressive. The current study examined empathy as a mediating factor between deficits in working memory and perpetration of intimate partner aggression and violence. Men in heterosexual relationships (N = 49) were administered a measure of visual-spatial working memory, and questionnaire measures of head injury and empathy. During a second session, men participated in a conflict discussion with their female partner that was coded for aggressive behavior. Female partners also reported on men’s physical and psychological abuse. Working memory was positively related to cognitive and affective empathy, and negatively related to men’s physical abuse perpetration and observed aggression during the conflict discussion. The effects of working memory on observed aggression during the conflict were fully mediated by cognitive and affective empathy. Additionally, the effects of working memory on reported physical IPV frequency were fully mediated by affective empathy. Deficits in working memory may decrease men’s ability to use empathetic processes, resulting in increased aggression and violence toward their intimate partners. Clinically, incorporating empathy training in battering intervention programs may be helpful, especially among men with deficits in cognitive functioning. View Full-Text
Keywords: executive functioning; working memory; interpersonal violence; empathy executive functioning; working memory; interpersonal violence; empathy
►▼ Show Figures 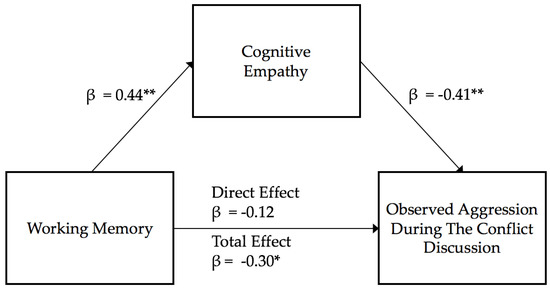