The Carbon-Isotope Record of the Sub-Seafloor Biosphere

Sub-seafloor microbial environments exhibit large carbon-isotope fractionation effects as a result of microbial enzymatic reactions. Isotopically light, dissolved inorganic carbon (DIC) derived from organic carbon is commonly released into the interstitial water due to microbial dissimilatory processes prevailing in the sub-surface biosphere. Much stronger carbon-isotope fractionation occurs, however, during methanogenesis, whereby methane is depleted in 13C and, by mass balance, DIC is enriched in 13C, such that isotopic distributions are predominantly influenced by microbial metabolisms involving methane. Methane metabolisms are essentially mediated through a single enzymatic pathway in both Archaea and Bacteria, the Wood–Ljungdahl (WL) pathway, but it remains unclear where in the pathway carbon-isotope fractionation occurs. While it is generally assumed that fractionation arises from kinetic effects of enzymatic reactions, it has recently been suggested that partial carbon-isotope equilibration occurs within the pathway of anaerobic methane oxidation. Equilibrium fractionation might also occur during methanogenesis, as the isotopic difference between DIC and methane is commonly on the order of 75‰, which is near the thermodynamic equilibrium. The isotopic signature in DIC and methane highly varies in marine porewaters, reflecting the distribution of different microbial metabolisms contributing to DIC. If carbon isotopes are preserved in diagenetic carbonates, they may provide a powerful biosignature for the conditions in the deep biosphere, specifically in proximity to the sulphate–methane transition zone. Large variations in isotopic signatures in diagenetic archives have been found that document dramatic changes in sub-seafloor biosphere activity over geological time scales. We present a brief overview on carbon isotopes, including microbial fractionation mechanisms, transport effects, preservation in diagenetic carbonate archives, and their implications for the past sub-seafloor biosphere and its role in the global carbon cycle. We discuss open questions and future potentials of carbon isotopes as archives to trace the deep biosphere through time. View Full-Text
Keywords: carbon isotopes; deep biosphere; diagenetic carbonates; methanogenesis; anaerobic methane oxidation; Wood–Ljungdahl pathway carbon isotopes; deep biosphere; diagenetic carbonates; methanogenesis; anaerobic methane oxidation; Wood–Ljungdahl pathway
►▼ Show Figures 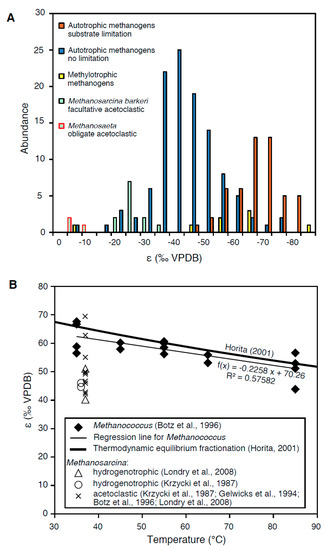