The Study of Geological Structures in Suli and Tulehu Geothermal Regions (Ambon, Indonesia) Based on Gravity Gradient Tensor Data Simulation and Analytic Signal
Next Article in Special Issue

Understanding Constraints and Triggering Factors of Landslides: Regional and Local Perspectives on a Drainage Basin

The Grande da Pipa River (GPR) basin (Portugal) has natural conditions that favor the occurrence of landslides. The hydrological year 2009/10 was characterized by high amounts of rainfall, which led to the occurrence of an also high number of landslides in this basin. The hydrodynamic character of the GPR basin was analyzed through a lumped parameter model of daily sequential water balances, in order to understand its influence in the stability of natural slopes. Results from the model were confronted to the inventory of landslides that occurred in the basin during the hydrological year 2009/10. Morphological, geotechnical, and hydrological local conditions affecting slope stability were also analyzed through back-analyses of two selected deep-seated landslides. Data here presented shows that the rise of water table is an important triggering factor for landslides. The most important constraint for landslides in the area is the degree of weathering and thickness of the upper layer of degraded marls. In most of the basin, the degraded layer is less than 5 m deep, causing the occurrence of shallow and intermediate landslides. However, deep-seated landslides were also found in areas, even with degraded marls that were less than 5 m-thick, where landslides have also occurred in the past. View Full-Text
Keywords: landslides; water table; shear strength parameters; Rio Grande da Pipa; Portugal landslides; water table; shear strength parameters; Rio Grande da Pipa; Portugal
►▼ Show Figures 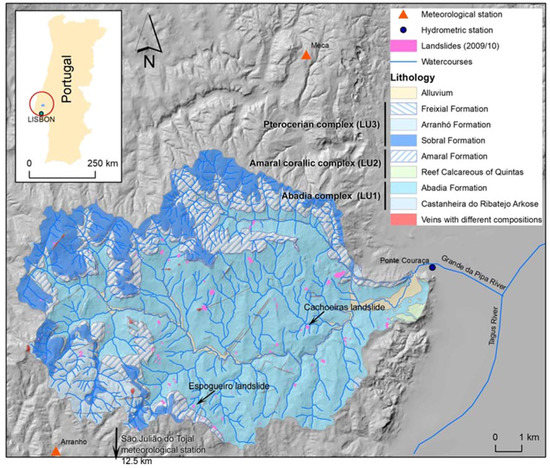