The Monitoring of CO2 Soil Degassing as Indicator of Increasing Volcanic Activity: The Paroxysmal Activity at Stromboli Volcano in 2019–2021
Next Article in Special Issue

Irpinia Earthquake and History: A Nexus as a Problem

Recently, a new strain rate map of Italy and the surrounding areas has been obtained by processing data acquired by the persistent scatterers (PS) of the synthetic aperture radar interferometry (InSAR) satellites—ERS and ENVISAT—between 1990 and 2012. This map clearly shows that there is a link between the strain rate and all the shallow earthquakes (less than 15 km deep) that occurred from 1990 to today, with their epicenters being placed only in high strain rate areas (e.g., Emilia plain, NW Tuscany, Central Apennines). However, the map also presents various regions with high strain rates but in which no damaging earthquakes have occurred since 1990. One of these regions is the Apennine sector, formed by Sannio and Irpinia. This area represents one of the most important seismic districts with a well-known and recorded seismicity from Roman times up to the present day. In our study, we merged historical records with new satellite techniques that allow for the precise determination of ground movements, and then derived physical dimensions, such as strain rate. In this way, we verified that in Irpinia, the occurrence of new strong shocks—forty years after one of the strongest known seismic events in the district that occurred on the 23 November 1980, measuring Mw 6.8—is still a realistic possibility. The reason for this is that, from 1990, only areas characterized by high strain rates have hosted significant earthquakes. This picture has been also confirmed by analyzing the historical catalog of events with seismic completeness for magnitude M ≥ 6 over the last four centuries. It is easy to see that strong seismic events with magnitude M ≥ 6 generally occurred at a relatively short time distance between one another, with a period of 200 years without strong earthquakes between the years 1732 and 1930. This aspect must be considered as very important from various points of view, particularly for civil protection plans, as well as civil engineering and urban planning development. View Full-Text
Keywords: Irpinia; seismic hazard; earthquake; strain rate; GNSS; InSAR Irpinia; seismic hazard; earthquake; strain rate; GNSS; InSAR
►▼ Show Figures 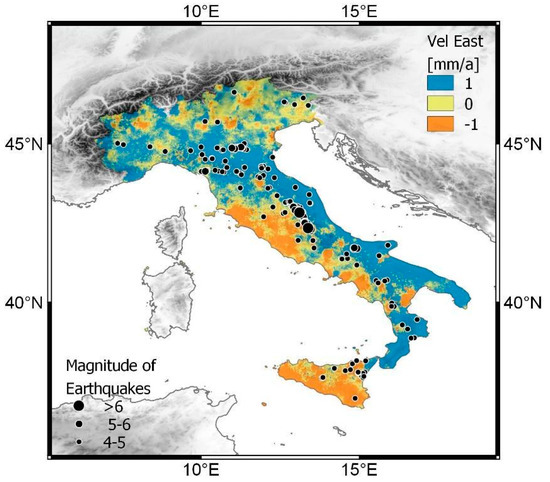