Near-Real-Time Loss Estimates for Future Italian Earthquakes Based on the M6.9 Irpinia Example
Next Article in Special Issue

Central Asian mountain regions are prone to multiple types of natural hazards, often causing damage due to the impact of mass movements. In spring 2017, Kyrgyzstan suffered significant losses from a massive landslide activation event, during which also two of the largest deep-seated mass movements of the former mining area of Mailuu-Suu—the Koytash and Tektonik landslides—were reactivated. This study consists of the use of optical and radar satellite data to highlight deformation zones and identify displacements prior to the collapse of Koytash and to the more superficial deformation on Tektonik. Especially for the first one, the comparison of Digital Elevation Models of 2011 and 2017 (respectively, satellite and unmanned aerial vehicle (UAV) imagery-based) highlights areas of depletion and accumulation, in the scarp and near the toe, respectively. The Differential Synthetic Aperture Radar Interferometry analysis identified slow displacements during the months preceding the reactivation in April 2017, indicating the long-term sliding activity of Koytash and Tektonik. This was confirmed by the computation of deformation time series, showing a positive velocity anomaly on the upper part of both landslides. Furthermore, the analysis of the Normalized Difference Vegetation Index revealed land cover changes associated with the sliding process between June 2016 and October 2017. In addition, in situ data from a local meteorological station highlighted the important contribution of precipitation as a trigger of the collapse. The multidirectional approach used in this study demonstrated the efficiency of applying multiple remote sensing techniques, combined with a meteorological analysis, to identify triggering factors and monitor the activity of landslides. View Full-Text
Keywords: landslide monitoring; Kyrgyzstan; Sentinel-1; D-InSAR; NDVI; DEMs; remote sensing; differential interferometry landslide monitoring; Kyrgyzstan; Sentinel-1; D-InSAR; NDVI; DEMs; remote sensing; differential interferometry
►▼ Show Figures 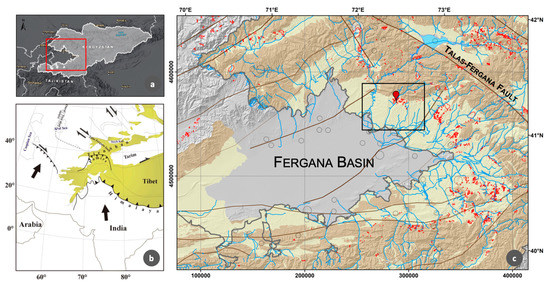