Bradoriids (Arthropoda) and the Cambrian Diversification
Previous Article in Journal

Geochemistry of Deccan Tholeiite Flows and Dykes of Elephanta Island: Insights into the Stratigraphy and Structure of the Panvel Flexure Zone, Western Indian Rifted Margin

Elephanta Island near Mumbai is an important area for understanding the stratigraphic and structural framework of the Deccan flood basalt province in the tectonically disturbed Panvel flexure zone on the western Indian rifted margin. Elephanta exposes a west-dipping, 66–65 Ma sequence of tholeiitic lava flows and dykes. Geochemical correlations with the thick, horizontal, 66–65 Ma Western Ghats sequence to the east show that lava flows of the Khandala and Ambenali formations are present at Elephanta, with two lava flows probably being locally derived. The Elephanta tholeiites have experienced crystal fractionation and accumulation, particularly of olivine. They have εNd(t) ranging from +5.4 to −7.9 and (87Sr/86Sr)t from 0.70391 to 0.70784, with most tholeiites little contaminated by continental lithosphere, probably lower crust. Field and geochemical data indicate a normal fault along the central part of Elephanta with a 220 m downthrow, consistent with a domino-type block-faulted structure of Elephanta, and the surrounding area as previously known. Seventeen of the 20 analyzed Elephanta intrusions, striking ~N–S, belong to the Coastal dyke swarm of the western Deccan province. Several of these are probable feeders to the Ambenali Formation in the Western Ghats sequence, requiring reconsideration of the current view that the voluminous Wai Subgroup lavas of the Western Ghats were erupted without organized crustal extension. East–west-directed extensional strain was already active at 66–65 Ma along this future (62.5 Ma) rifted continental margin. A young (~62 Ma) ankaramite dyke on Elephanta Island is a probable feeder to the Powai ankaramite flow in the 62.5 Ma Mumbai sequence 20 km to the northwest. View Full-Text
Keywords: volcanism; flood basalt; volcanic rifted margin; tholeiite; geochemical stratigraphy; Deccan Traps; India volcanism; flood basalt; volcanic rifted margin; tholeiite; geochemical stratigraphy; Deccan Traps; India
►▼ Show Figures 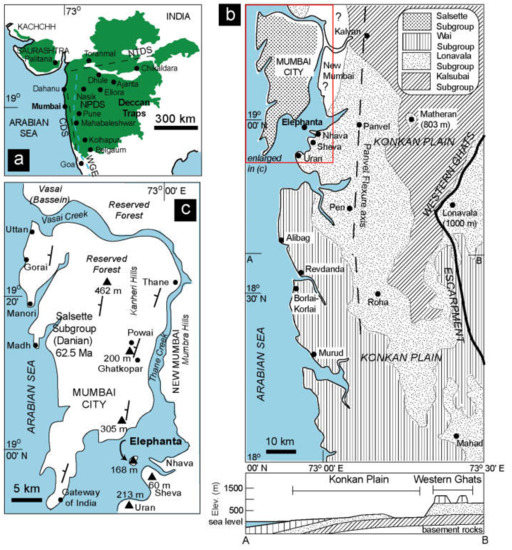