The Tagus Estuary as a Numerical Modeling Test Bed: A Review
Next Article in Special Issue

Observations of the deposits, flow marks, and damages of three mixed-snow avalanches of widely different size were analyzed with regard to flow regimes, velocities, pressures, densities, flow depths, erosion modes, and mass balance. Three deposit types of different density and granulometry could be clearly discerned in these avalanches. They are attributed to dense, fluidized, and suspension flow regimes, respectively. Combining observations, we estimated the density in the fluidized layer as 35–100 kg m, in good agreement with inferences from pressure measurements. Upper bounds for the suspension layer density, arising from the run-up height, velocity, and damage pattern, are about 5 kg m at the valley bottom. An approximate momentum balance of the dense layer suggests that the snow cover was eroded to considerable depth, but only partly entrained into the flow proper. The suspension layer had largely lost its erosive power at the point where it separated from the denser parts of the avalanche. Our estimates shed doubt on collisions between snow particles and aerodynamic forces at the head of the avalanche as sole mechanisms for creating and upholding the fluidized layer. We conjecture that the drag from air escaping from the snow cover as it is being compressed by the overriding avalanche could supply the missing lift force. View Full-Text
Keywords: snow avalanches; field observations; deposit texture; granulometry; snow entrainment; damage; powder-snow avalanches; flow regimes; simple estimates snow avalanches; field observations; deposit texture; granulometry; snow entrainment; damage; powder-snow avalanches; flow regimes; simple estimates
►▼ Show Figures 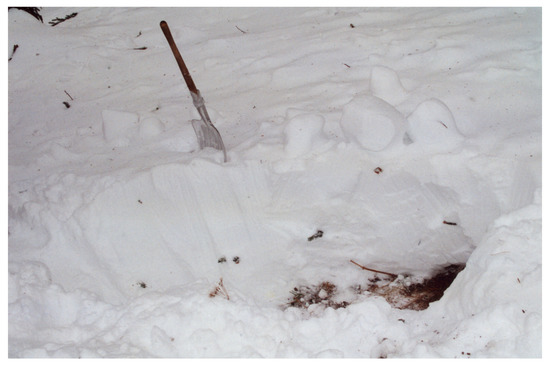