Transition from Conventional Broiler Meat to Meat from Production Concepts with Higher Animal Welfare: Experiences from The Netherlands

Insects represent a possible alternative nutrient source for food and feed purposes. Insects could be reared on a feed basis alternative to conventional ones of animal origin and could help to face the rising demand of proteins. Mealworm could be reared directly on former foodstuff products allowing to reduce waste materials and enhance profits in several sectors. This study demonstrates that Tenebrio molitor rearing can be done on leftovers and by-products with proficient outcomes and high-quality final products. However, rearing substrates must be carefully selected in order to maximize the outcomes in relation to the prefixed goals.

Tenebrio molitor (mealworm) larvae represent one of the most interesting edible insects and could be reared on alternative feeds, such as former foodstuff products (FFPs). In the present work, five different FFPs (brewery spent grains, bread and cookie leftovers, and mixes of brewer’s spent grain or bread with cookies) were employed as feeding substrates. Larvae’s growth performances, chemical composition, microbial loads, and antioxidant status were determined. Chemical compositions of the substrates affected all the tested parameters. Brewery spent grains-fed larvae showed a faster growth period and higher crude protein and carbohydrate contents. The use of cookies as a single substrate or their addition to spent grains or bread increased the lipids contents, while growth was delayed. Microbial loads were partially affected by the fed diet. The antioxidant status of larvae showed different concentrations of tocopherols isoforms (δ, γ, α) in relation to the diet; however, no differences were detected in relation to the global antioxidant capacity (2,2-azinobis-(3 ethylbenzothiazoline-6-sulfonic acid), ABTS reducing activity; 1,1-diphenyl-2-pircydrazyl, DPPH radical scavenging activity; ferric reducing ability, FRAP). Results point out a high plasticity of mealworm larvae and the potential to tailor the final outcomes in relation to the substrate employed. Mealworms could be practically reared on FFPs to produce food-feed with high nutrient values. View Full-Text
Keywords: mealworm; edible insects; animal protein; by-product; entomophagy mealworm; edible insects; animal protein; by-product; entomophagy
►▼ Show Figures 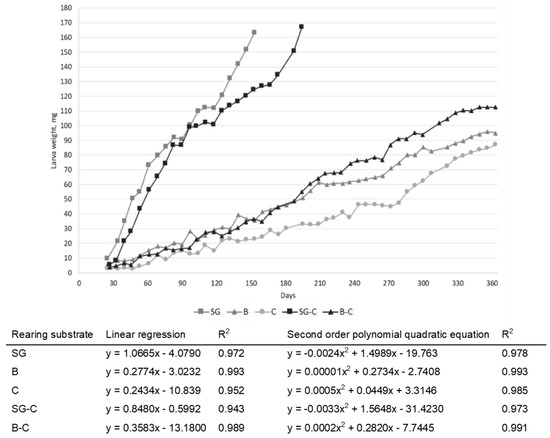