Selenium (Se) is an essential nutrient for humans and many other species including pigs, and it plays an important role in many aspects of biological functions especially in the immune system. The metabolic roles of Se implement its biological function through its incorporation into selenoproteins, that contain a unique amino acid selenocysteine (Sec). Although 24–25 selenoprotein genes have been identified in mammals as the most important immune organ, the expression pattern of selenoproteins in the spleen of pigs regulated by different Se levels remains poorly known. The present study is conducted to evaluate the effects of dietary Se deficiency and excess on the mRNA expression levels of selenoproteins in pig spleen tissues. The results show that dietary Se levels can significantly affect the transcription levels of 14 selenoprotein genes in the spleen of pigs, which can help us to understand the biological functions of Se further and improve the use of Se in livestock production.

Selenium (Se) is a nutritionally essential trace element for humans and many other species [1]. Previous data have suggested that Se plays an important role in chemopreventive effects [2,3], muscle metabolism [4,5], oxidant defense [6], neurobiology [7], aging [8], and reproduction [9]. Many previous studies reported that Se also plays an important role in the immune system [10,11]. In a mitogen-stimulated situation, Se deficiency suppresses lymphocyte proliferation, reduces the level of immunoglobulin, and declines the number of T cells [12,13]. However, excess dietary Se can also damage the normal function of the immune system [14,15,16,17]. It is found that excess dietary Se caused lymphocytic necrosis [14], growth retardation, and atrophy of immune organs [18].
Composing Se-containing proteins is the main method that Se exhibits its biological functions [19,20]. Therefore, the levels of Se in the feed have an important influence on the levels of selenoproteins. There are 24–25 selenoprotein genes identified in mammals, but the effects of dietary Se concentrations ranging from deficiency to moderately high levels on the gene expression of selenoproteins are still unclear [21,22,23]. Selenoproteins are essential for the immune system, and knockout of all T-cell selenoproteins can induce a decrease in the number of T cells and atrophy of many immune organs [24]. The spleen is the most important immune organ. Thus, it is crucial to investigate the relation between the profile of selenoprotein gene expression and the metabolic impact of dietary Se deficiency or excess in the spleen. Because pigs are not only an important kind of food-producing animal but also an excellent model for human nutrition [25,26] and medicine [27,28], revealing the role of dietary Se in the regulation of selenogenome expression in pigs will help understand Se metabolic diseases of animals, as well provide useful clues for human health. Therefore, the present study is conducted to evaluate the effects of dietary Se deficiency and excess on the mRNA expression levels of selenoproteins in pig spleen tissues.

All procedures used in this study were approved by the Institutional Animal Care and Use Committee of Northeast Agricultural University.

A total of 20 healthy uncastrated boars (Duroc × Landrace × Yorkshire) with an initial body weight of 10 ± 0.72 kg were randomly divided into four groups (5 pigs per group). The pigs were fed a Se deficient corn-soybean basal diet (BD, produced in the Se deficient area in Heilongjiang, China, Se content <0.03 mg/kg diet), or the BD added sodium selenite at 0.3, 1.0, or 3.0 mg Se/kg diet, respectively. The experiment lasted 16 weeks. All pigs were located in individual cages with fully slatted flooring, a single-hole feeder, and a nipple waterer, and the feed and water were available ad libitum. At the end of the study, all pigs were slaughtered. The spleen samples were quickly removed, rinsed with ice-cold sterile deionized water, frozen immediately in liquid nitrogen, and stored at −80 °C until required.

Total RNA was isolated from the spleen tissue (50 mg tissue; n = 5/diet group) using the Trizol reagent according to the manufacturer’s instructions (Invitrogen, Shanghai, China). The concentration and quality of the RNA were determined by an ultramicrospectrophotometer (Thermo Scientific, Wilmington, DE, USA) and agarose-gel electrophoresis, respectively. The cDNA was generated from total RNA using a cDNA reverse transcription kit (Takara, Dalian, China) and stored at −80 °C before use.
The expression levels of selenoprotein genes were determined by the technology of real-time quantitative reverse transcription PCR using SYBR Premix ExTaq TM (Takara, Dalian, China) on the ABI PRISM 7500 system (Applied Biosystems, Forster City, CA, USA). The PCR primers (Table 1) were designed and synthesized by Sangon (Shanghai, China). The reaction volume was 20 μL, as recommended by the SYBR real-time PCR kit (Takara, Dalian, China). The RT-PCR conditions were as follows: 1 cycle at 95 °C for 30 s, 40 cycles at 95 °C for 5 s, and 60 °C for 34 s. All of the PCR reactions were performed in triplicate, and the results were normalized on the basis of β-actin gene expression. Relative mRNA expressions were calculated using the 2−ΔΔCt method [29].

One-way ANOVA followed by Duncan’s multiple range test (SPSS for Windows 13.0, Chicago, IL, USA) was used to test the effects of the four dietary Se concentrations on mRNA levels of selenoproteins. The data were expressed as the mean ± standard deviation. The differences were considered to be significant at p < 0.05.

In conclusion, under the conditions of dietary selenium levels in this study, 24 selenoprotein genes are expressed in the pig spleen. The transcription levels of 14 selenoprotein genes in the pig spleen were regulated by Se level in diet, but others cannot be affected by the Se level of diet. The mRNA expression of Gpx1, Gpx2, Dio2, Txnrd3, Selh, Sepn1, Sepp1, and Selv is higher in the spleen of the pigs with the 1.0 mg Se/kg diet. Thus, within the studied levels, 1.0 mg Se/kg diet is an optimum dose for the expression of selenoproteins in the spleen of the pigs. In addition, pigs may be a good model for studying mechanisms related to the potential risk of high-Se or low-Se intake in humans.

This study was supported by the National Key Research and Development Program of China (2018YFD0501101), the National Key Technology R&D Program (2013BAD20B04) and the China Agriculture Research System (CARS-35). 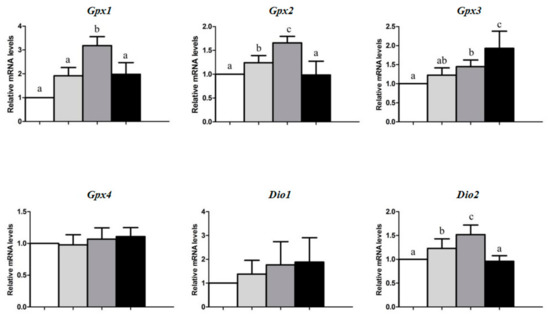 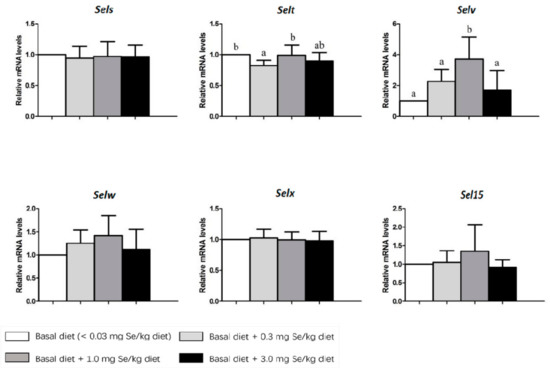 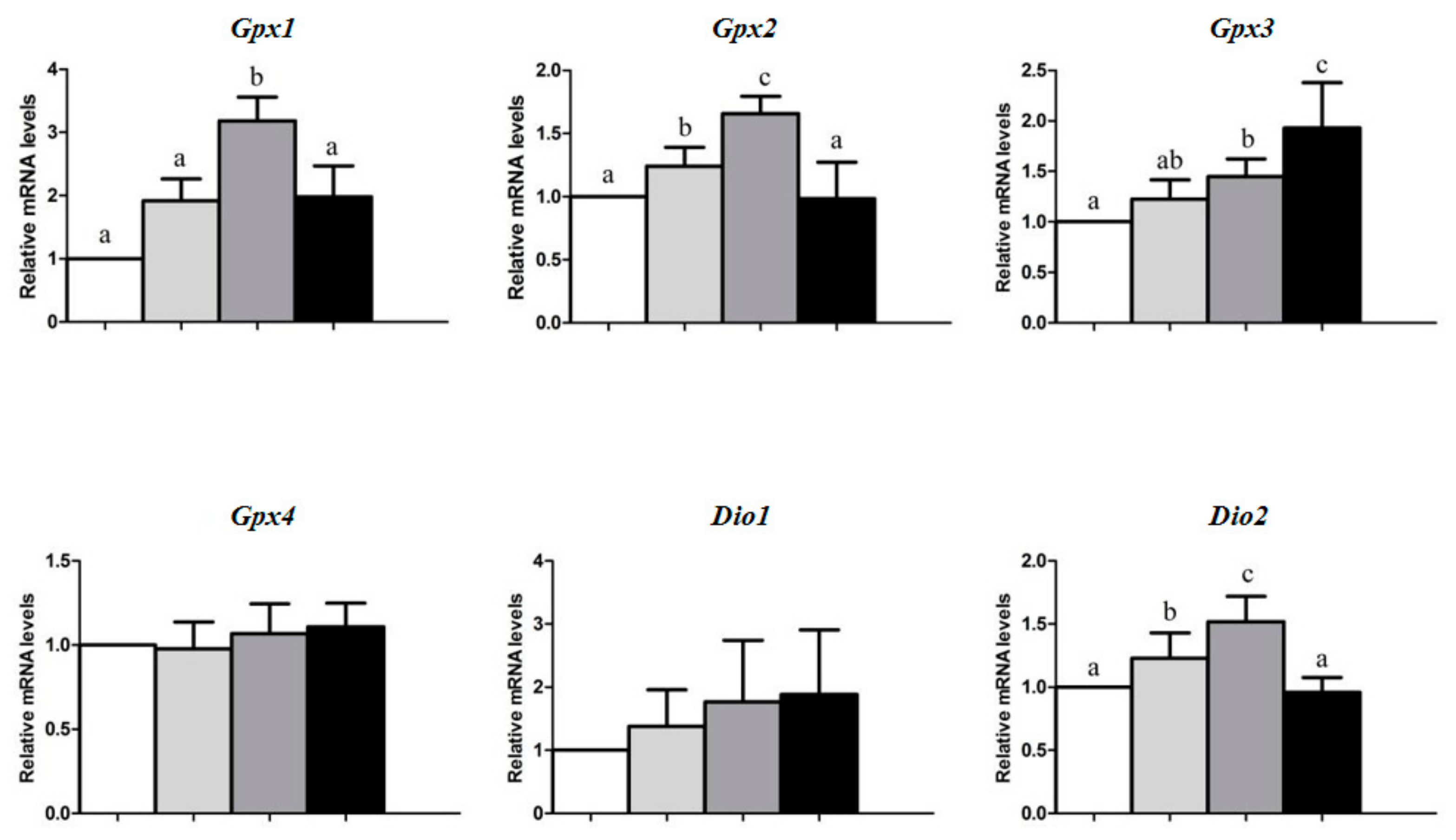 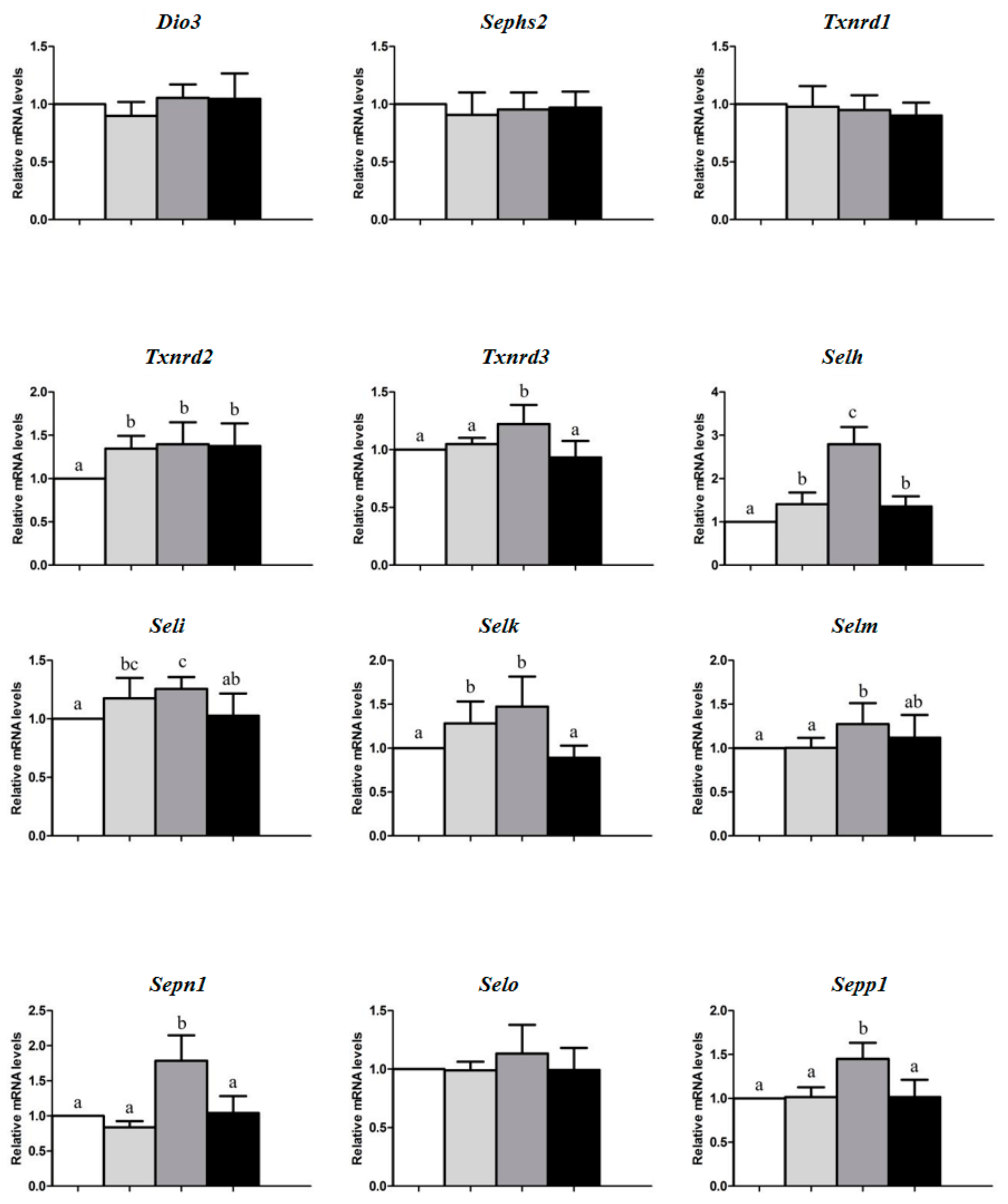