There is no national system for monitoring numbers of dogs entering municipal council pounds and shelters in Australia, or their outcomes. This limits understanding of the surrendered and stray dog issue, and prevents the evaluation of management strategies. We aimed to estimate these in 2012–2013. Dog intake and outcome data were collected for municipal councils and animal welfare organizations using annual reports, publications, primary peer-reviewed journal articles, websites and direct correspondence. More comprehensive data were obtained for New South Wales, Victoria, South Australia and Australian Capital Territory, whereas it was necessary to impute some or all data for Western Australia, Northern Territory, Queensland and Tasmania, as data were incomplete/unavailable. A refined methodology was developed to address the numerous limitations of the available data. An estimated national total of 211,655 dog admissions (9.3 admissions/1000 residents) occurred in 2012–2013. Of these admissions, the numbers where the dog was reclaimed, rehomed or euthanized were estimated as 4.4, 2.9 and 1.9/1000 residents, respectively. Differences in outcomes were evident between states, and between municipal councils, welfare organizations and rescue groups. This study emphasizes the need for an ongoing standardized monitoring system with appropriate data routinely collected from all municipal councils, animal welfare organizations and rescue groups in Australia. Such a system would only require data that are easily collected by all relevant organizations and could be implemented at relatively low cost. This could facilitate ongoing evaluation of the magnitude of the surrendered and stray dog problem, and allow assessment of strategies aiming to reduce numbers of admissions and euthanasia. View Full-Text
Keywords: surrendered; stray; dogs; animal shelter; municipal pound; euthanasia; Australia; rehome; reclaim; transfers; rescue surrendered; stray; dogs; animal shelter; municipal pound; euthanasia; Australia; rehome; reclaim; transfers; rescue
►▼ Show Figures 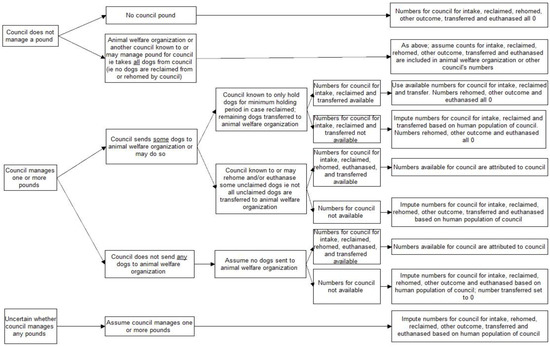