Atopic dermatitis is a common inflammatory and itchy skin disease, constituting a global issue that affects up to 15% of the general human and dog population. The pathogenesis of this disease is known to be multifactorial and not only consisting of skin barrier dysfunction, but also with immunological dysregulation and skin microbiota changes having a central role. In humans, establishment of the gut microbiota in early life influences the development of allergies, among others also atopic dermatitis in children. To the author’s knowledge, there is currently no study comparing the gut microbiome between allergic and healthy dogs. We now present results demonstrating that allergic dogs have a significantly different gut microbiota when compared to healthy control dogs. Further investigations including a larger number of dogs are now required to confirm these results, in addition to studies utilizing novel interventions targeting the gut microbiota.

Human studies show that in addition to skin barrier and immune cell dysfunction, both the cutaneous and the gut microbiota can influence the pathogenesis of atopic diseases. There is currently no data on the gut-skin axis in allergic canines. Therefore, the aim of this study was to assess the bacterial diversity and composition of the gut microbiome in dogs with atopic dermatitis (AD). Stool samples from adult beagle dogs (n = 3) with spontaneous AD and a healthy control group (n = 4) were collected at Days 0 and 30. After the first sampling, allergic dogs were orally dosed on a daily basis with oclacitinib for 30 days, and then re-sampled. Sequencing of the V3–V4 region of the 16S rRNA gene was performed on the Illumina MiSeq platform and the data were analyzed using QIIME2. The atopic dogs had a significantly lower gut microbiota alpha-diversity than healthy dogs (p = 0.033). In healthy dogs, a higher abundance of the families Lachnospiraceae (p = 0.0006), Anaerovoracaceae (p = 0.006) and Oscillospiraceae (p = 0.021) and genera Lachnospira (p = 0.022), Ruminococcus torques group (p = 0.0001), Fusobacterium (p = 0.022) and Fecalibacterium (p = 0.045) was seen, when compared to allergic dogs. The abundance of Conchiformibius (p = 0.01), Catenibacterium spp. (p = 0.007), Ruminococcus gnavus group (p = 0.0574) and Megamonas (p = 0.0102) were higher in allergic dogs. The differences in alpha-diversity and on the compositional level remained the same after 1 month, adding to the robustness of the data. Additionally, we could also show that a 4-week treatment course with oclacitinib was not associated with changes in the gut microbiota diversity and composition in atopic dogs. This study suggests that alterations in the gut microbiota diversity and composition may be associated with canine AD. Large-scale studies preferably associated to a multi-omics approach and interventions targeting the gut microbiota are needed to confirm these results.
Keywords:
dog; atopic dermatitis; gut microbiota; bacterial diversity; bacterial composition

Atopic dermatitis is a multifactorial disease, affecting millions of people and dogs worldwide. In the last decade, human studies showed that in addition to skin barrier and immune cell dysfunction, both the cutaneous and the gut microbiota are additional strategic players in AD pathogenesis [1]. The gut microbiota influences the allergen tolerance in many different ways, either directly interacting with T regulatory (Treg) cells or through the production of short-chain fatty acids (SCFA), post-translational host protein modification and activities on the epigenetic level [2,3]. Many studies showed that the pathogenesis of canine AD is very similar to the human counterpart, and therefore canine AD models represent an invaluable tool for human AD research [4]. To date, all studies in allergic dogs have focused only on the skin microbiota. Studies evaluating diversity and composition of gut microbiota in canine AD are lacking. Atopic dogs exhibit a significant dysbiosis with Staphylococcus as the predominant species in the flared skin [5], but these skin microbiota changes are rather considered to be a consequence than the cause of the disease [6]. The skin Lachnospiraceae frequency of puppies was found to be positively correlated with that of the Treg cells [7]. Moreover, a birth cohort study exploring the early life “window of opportunity”, identified gastrointestinal disturbances as one of the significant physiological foundations in the development of canine AD [8].
Therefore, the main objective of this work was to evaluate the diversity and composition of the gut microbiota in dogs with AD and compare these findings with those of healthy controls.

Stool samples from 3 adult beagle dogs (two male both 12 years old and one female 7 years old) with spontaneous AD and a control group consisting of 4 healthy dogs (three male with an average of 7 years and one female 9 years old) were collected at 2 time points (day 0 and 30) directly into PERFORMAbiome-GUT tubes (DNA Genotek, Ottawa, ON, Canada). The sample were immediately stored at −80 °C until processing. In addition to studying the time effect (one month sampling interval), we wanted to evaluate whether oclacitinib, a Janus kinase inhibitor (Apoquel, Zoetis, Delémont, Switzerland) is associated with gut microbiota changes. Therefore, after the initial sampling, the allergic dogs received orally once daily oclacitinib until the next re-sampling. The atopic dogs were allergic since years and received AD symptomatic treatment, which consisted of oclacitinib and occasionally topical glucocorticoids (Cortavance, Virbac, Carros, France). For this study, the atopic dogs did not receive any anti-inflammatory/anti-itch or antibiotic treatment for 1 month and several years before the first sampling, respectively. Moreover, the healthy dogs did not receive any drugs (including antibiotics) for several years. Both the allergic and heathy dogs were regularly de-wormed and vaccinated. All dogs are owned by the Vetsuisse Faculty University of Zurich. They live in the same environment (direct contact was possible) and are fed the same food.
Extraction, lysis and DNA isolation were performed on stool samples, according to the manufacturer’s recommendation (Fast DNA Stool Mini Kit, Qiagen, Basel, Switzerland). Bead beating was run on a fastprep24 instrument (MP Biomedicals, Eschwege, Germany; 4 cycles of 45 s at speed 4) in 2 mL screwcap tubes containing 0.6 g of 0.1 mm glass beads. The concentration of the isolated DNA was assessed with PicoGreen measurement (Quant-iT™ PicoGreen™ dsDNA Assay Kit, Thermo Fisher Scientific, Basel, Switzerland), and integrity was checked for a random sample by agarose gel electrophoresis. The library preparation included sample quality control and Nextera two-step PCR amplification using primer set 515F × 806R (V3–V4 region of 16S rRNA), PCR product purification, quantification and equimolar pooling. The amplicon libraries paired-end sequencing (2 × 250 bp) was performed on an Illumina MiSeq platform at Microsynth AG (Balgach, Switzerland).
The data was analyzed using QIIME2 (version 2020.2; https://docs.qiime2.org, access on 10 September 2022). The data was then denoised with DADA2 to merge the paired reads generating amplicon sequence variants (ASVs) to ensure a sufficient depth to capture most features [9]. An even sampling depth that was selected after performing alpha rarefaction module (60,000 reads per sample) was used to assess alpha- and beta-diversity measures. Alpha-diversity was assessed by Shannon and Faith’s phylogenetic diversity indexes. Beta-diversity was assessed using Bray Curtis and Jaccard distance measures and presented using principal coordinates analysis (PCoA) plots. Taxonomy was assigned to ASVs using the classify-learn Naïve Bayes classifier against the pre-trained Naïve Bayes silva-132-99-nb-classifier trained against Silva (release 132) full-length sequences [10]. The Wilcoxon test was used to assess the microbiota compositional differences between the AD and control groups at the different taxonomic levels, and the Permanova test was used for the beta analysis comparison. R (version 4.1.0; https://www.r-project.org, access on 10 September 2022) was used to perform all the statistical analysis and data visualization.

3.1. Comparison of Bacterial Diversity Parameters between Allergic and Healthy Dogs

The reads obtained from the stool microbiota were analyzed, and a plateau of species richness (up to 200 ASVs) was achieved at 60,000 reads per sample to capture the diversity (Figure 1a). A clear difference in gut microbiota alpha diversity between allergic and healthy dogs was identified by Shannon alpha diversity index (p = 0.033) not only at day 0 but also 30 days later (Figure 1b). The Faith’s phylogenetic diversity index did not differ significantly at any time point (Figure 1c). Principal coordinate analysis by Bray-Curtis and Jaccard showed clustering of the bacterial gut microbiota of allergic against healthy dogs, reaching significance (p = 0.05) (Figure 1d,e).

3.2. Association of Gut Microbiota Composition with Atopic and Healthy States

The reduced diversity and differences of specific bacterial taxa suggest that the gut microbiota may play a role in the pathogenesis of canine AD. The herein identified potentially beneficial and pathogenic bacterial targets should be further explored in large-scale studies as possible disease or therapy monitoring biomarkers. Furthermore, future interventional studies encompassing multi-omics approaches represent the next steps toward unravelling the presence and pathophysiology of the gut-skin axis in this species.

The animal study protocol was approved by the Swiss Cantonal Veterinary Office and conducted in strict accordance with guidelines established by the Animal Welfare Act of Switzerland (ZH052/2021, 33323, valid from 3 June 2021).

We would like to thank Christopher Asquith (University of Eastern Finland, Kuopio, Northern Savonia, Finland) for useful discussions and English editing. 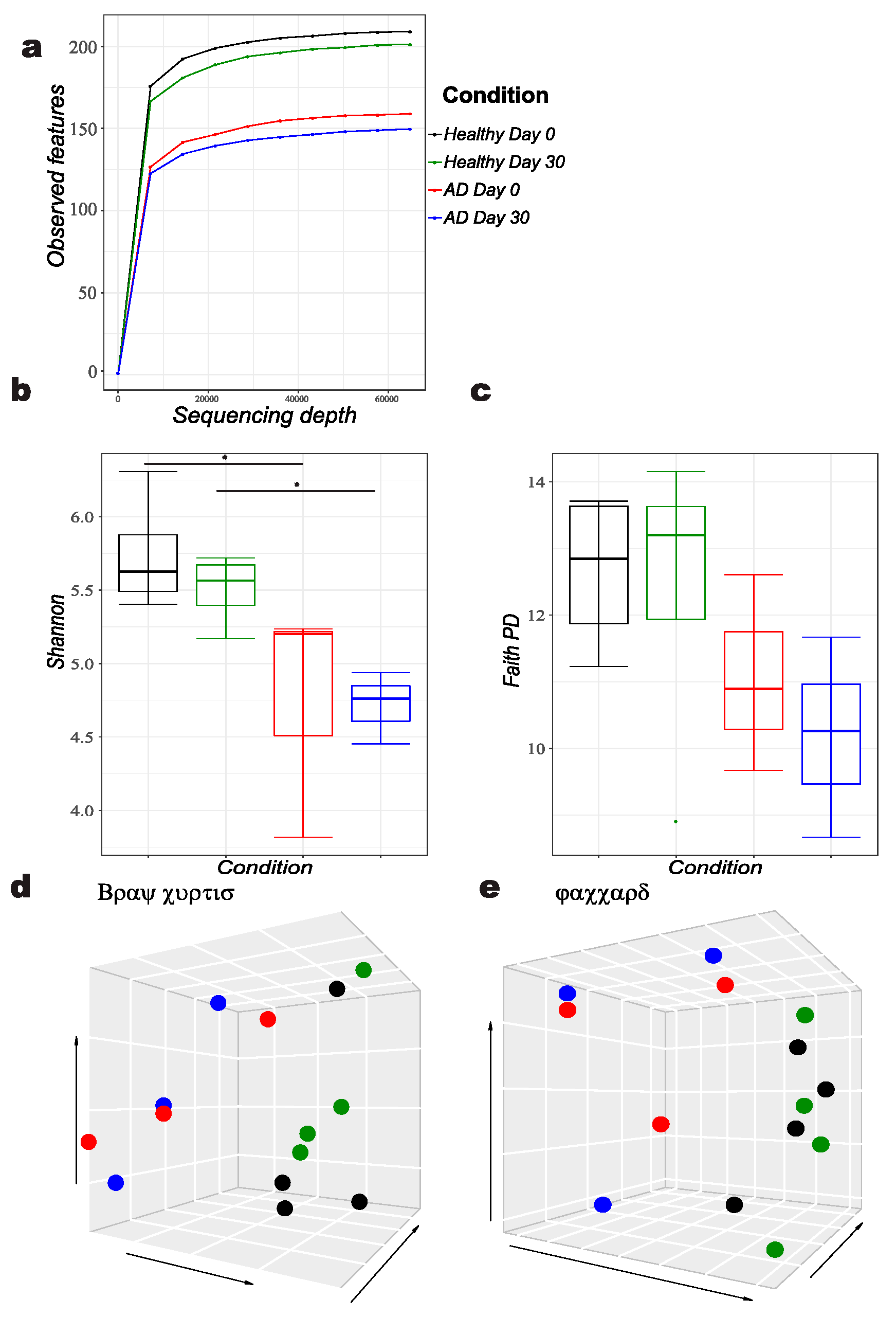 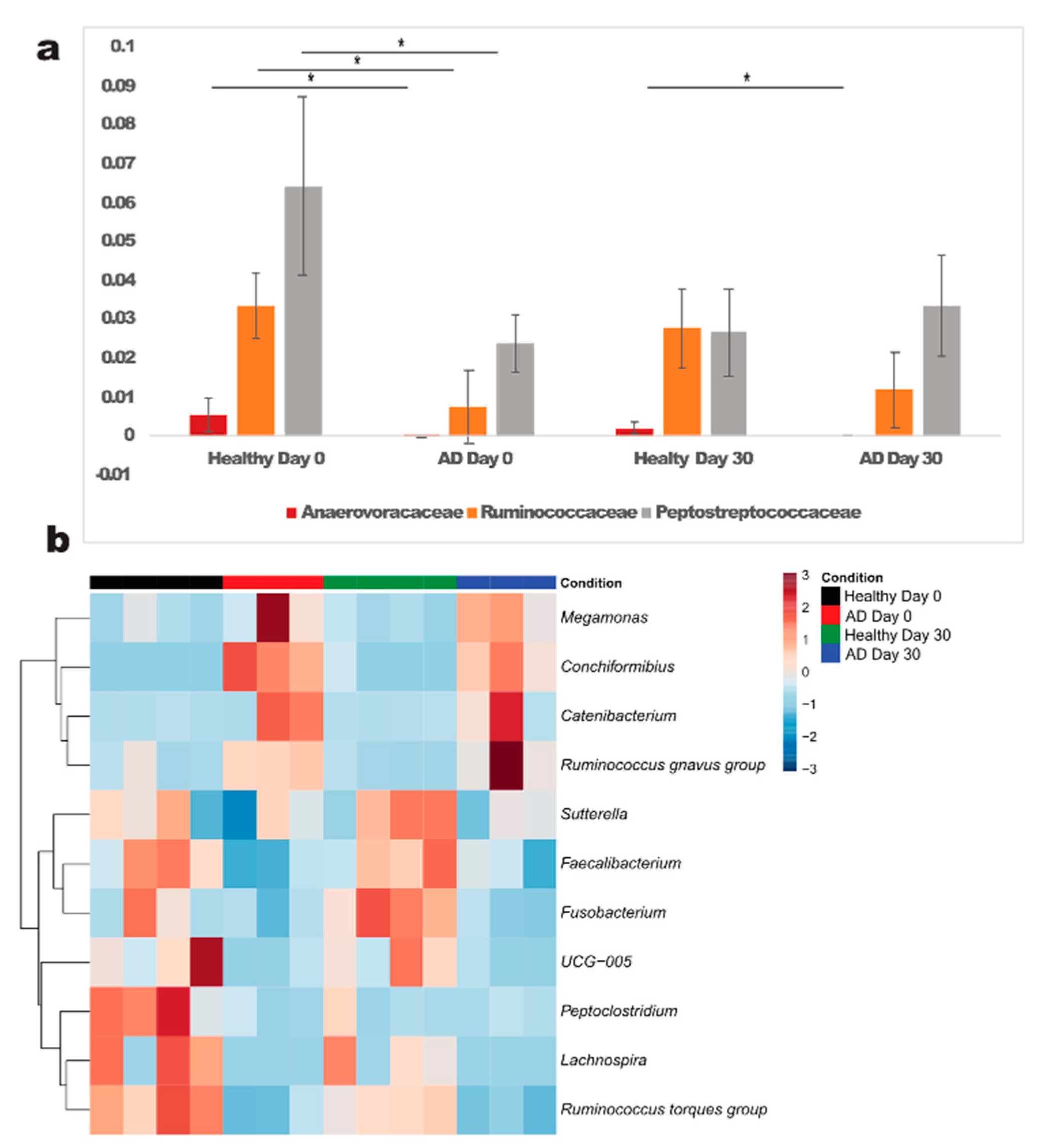