This study was conducted to characterise the caecal microbiota in two broiler management systems (fast and slow-growing) during the growing period, using 16S rRNA sequencing analysis. Because of the essential role of the caecal bacteria in poultry health and productivity, these data could be considered as a biomarker of health status and will make it possible to evaluate different treatments applied in animals. The main results demonstrated that microbiota is in constant development throughout the growing period for both management systems, and the most abundant bacteria groups are related to better productive performance and intestinal health.

Caecal microbiota and its modulation play an important role in poultry health, productivity and disease control. Moreover, due to the emergence of antimicrobial-resistant bacteria, society is pressing for a reduction in antibiotic administration by finding effective alternatives at farm level, such as less intensified production systems. Hence, the aim of this study was to characterise the caecal microbiota in two different broiler management systems, fast and slow-growing, using 16S rRNA sequencing analysis. To this end 576 broilers were reared in two different management systems (fast and slow-growing). Results showed that Firmicutes represented the dominant phylum for both systems. At the onset, Proteobacteria was the second prevalent phylum for fast and slow-growing breeds, outnumbering the Bacteroidetes. However, during the rest of the production cycle, Bacteroidetes was more abundant than Proteobacteria in both groups. Finally, regardless of the management system, the most predominant genera identified were Oscillospira spp., Ruminococcus spp., Coprococcus spp., Lactobacillus spp. and Bacteroides spp. In conclusion, fast and slow-growing broiler microbiota are in constant development throughout rearing, being relatively stable at 21 days of age. Regarding the genus, it should be noted that the three most abundant groups for both systems, Ruminococcus spp., Lactobacillus spp. and Bacteroides spp., are related to better productive performance and intestinal health. View Full-Text
Keywords: broiler; growing period; microbiota; biomarker; 16S rRNA analysis broiler; growing period; microbiota; biomarker; 16S rRNA analysis
►▼ Show Figures 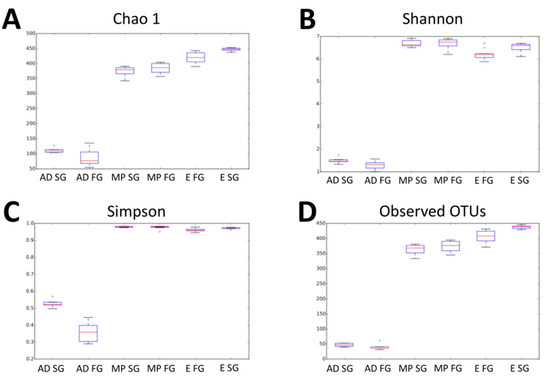