The center of pressure (COP) is recognized as a valuable tool for the assessment of orthopedic and neurologic disorders in humans. Relatively few studies are available in veterinary medicine, particularly concerning the COP in the individual paw. This study assessed the dynamic paw COP parameters during the stance phase of dogs with cox- or cubarthrosis (20 dogs each), as well as of 20 sound dogs. Data were obtained by walking over a pressure platform and analyzed within the diseased groups in comparison to the control group. Both diseased groups showed significant differences between the affected and non-affected limbs, but also in comparison to the reference limbs of sound animals. For coxathrosis, the primary increase was in the medio-lateral COP displacement and the COP area in both hind limbs. For cubarthrosis, the most prominent changes were an increase in the medio-lateral COP displacement in the ipsilateral hind limb and in the cranio-caudal COP displacement in the lame limb. Additionally, the COP area increased in both hind limbs. This can reflect a compensatory redistribution of the body mass as well as compensatory changes of body balance.
Keywords:
balance; center of pressure; dog; gait analysis; osteoarthritis

The data of the diseased dogs were widely collected within the routine clinical examinations at the Section for Physical Therapy and Rehabilitation of the University of Veterinary Medicine, Vienna. In addition, some measurement data from voluntary sound participants and data collected in previous studies were used. The data were all obtained using the same standardized measurement procedure.
The conduct of all these measurements was discussed and approved by the institutional ethics and animal welfare committee in accordance with Good Scientific Practice guidelines and national legislation (ETK-04/05/97/13, ETK-01/03/2017, ETK-09/12/2015, ETK-05/09/2016).

A pressure distribution measurement platform (FDM Type 2) made by Zebris Medical GmbH (Allgäu, Germany) was used to record the ground reaction forces. This platform is equipped with 15,360 sensors covering an area of 203 × 54.2 cm working with a measuring frequency of 100 Hz. The measurement procedure was filmed with a camera (Panasonic NV-MX500) and data were gathered using WinFDM software (v1.2.2, Zebris Medical).
The measurement platform was positioned in the middle of a 7-meter long walkway. A flat running surface was created by means of adjacent chipboards. Chipboard and platform were covered with a 2-mm-thick rubber mat to prevent visual irritation of the participants and slipping on the smooth surface.

Before measurement, dog and owner were given sufficient time to explore the measuring laboratory. After the animal was allowed to move freely throughout the room, it was led over the platform several times on a leash at walking speed until an even gait pattern was achieved. The dogs were, as is usual in Austria, led on the left side of the handler. This corresponds to the position in which the dogs are led by the owner in everyday life. During the following measuring procedure, the animal was led over the platform in a walking gait in the same manner until a minimum of 5 valid consecutive steps were recorded. A pass was considered valid if the dog moved at a steady pace, kept his head straight, and did not pull on the leash.

Investigated parameters were speed (m/s) and acceleration (m/s2), which were both calculated from the ground reaction force parameters of the left forelimb.
The peak vertical force (PFz, N) and the vertical impulse (IFz, Ns) of each limb were measured and then normalized to the total force (PFz%; IFz%) by applying the following equation to each limb: where XFz = mean value of PFz or IFz; LF: left front limb; FR: right front limb; HL: left hind limb; HR: right hind limb.
Furthermore, a symmetry index expressed as a percentage (SI%) was calculated for both parameters according to the following equation, modified from Budsberg et al. [28]: where SIXFz = SI of PFz or IFz; XFz = mean value of PFz or IFz; LF = left front limb; RF = right front limb.
For the calculation of the SI% of the hind limbs, the equation was applied in the same fashion.
Another parameter under investigation was the time at which the PFz is reached during the stance phase. This was expressed as a percentage of the stance phase duration (TPFz%). The stance phase duration was also investigated and was expressed as percentage of the total stance phase duration (SPD%).
The following COP parameters were evaluated for the stance phases of each paw:

Statistical analyses were performed using IBM SPSS v24. The normal distribution of the parameters was proven by the Kolmogorov–Smirnov test. Linear mixed effects models were used to analyze the differences between groups, and hips, or elbows and limbs, where the factor hip or elbow and limb was treated as a repeated measurement. Post hoc tests were performed using Sidak’s alpha correction procedure. For all analyses, a p-value below 5% (p < 0.05) was seen as significant.

Dogs with OA of the elbow or hip show compensatory changes both in the distribution of body mass and in the COP parameters within the paws. The nature of these changes depends on whether a front limb or a hind limb are affected, but similarities could still be found between both investigated diseases. Significant differences can be found not only when comparing the data from the individual limbs of the diseased animals, but also in comparison to the reference limbs of sound animals. In dogs with osteoarthritis of the hip, the primary increase was in the medio-lateral COP displacement and the COP-Area in both hind limbs. In dogs with osteoarthritis of the elbow, however, the medio-lateral COP displacement in the ipsilateral hind limb and the cranio-caudal COP displacement in the lame limb increased. The COP-Area, on the other hand, increased in both hind limbs. The data and findings gathered in this study from both diseased and sound dogs could serve as a base for even more in-depth research on the paw COP, which could enable a diagnostic use in the future.

The authors would like to thank all participating dogs and their owners for their contribution. 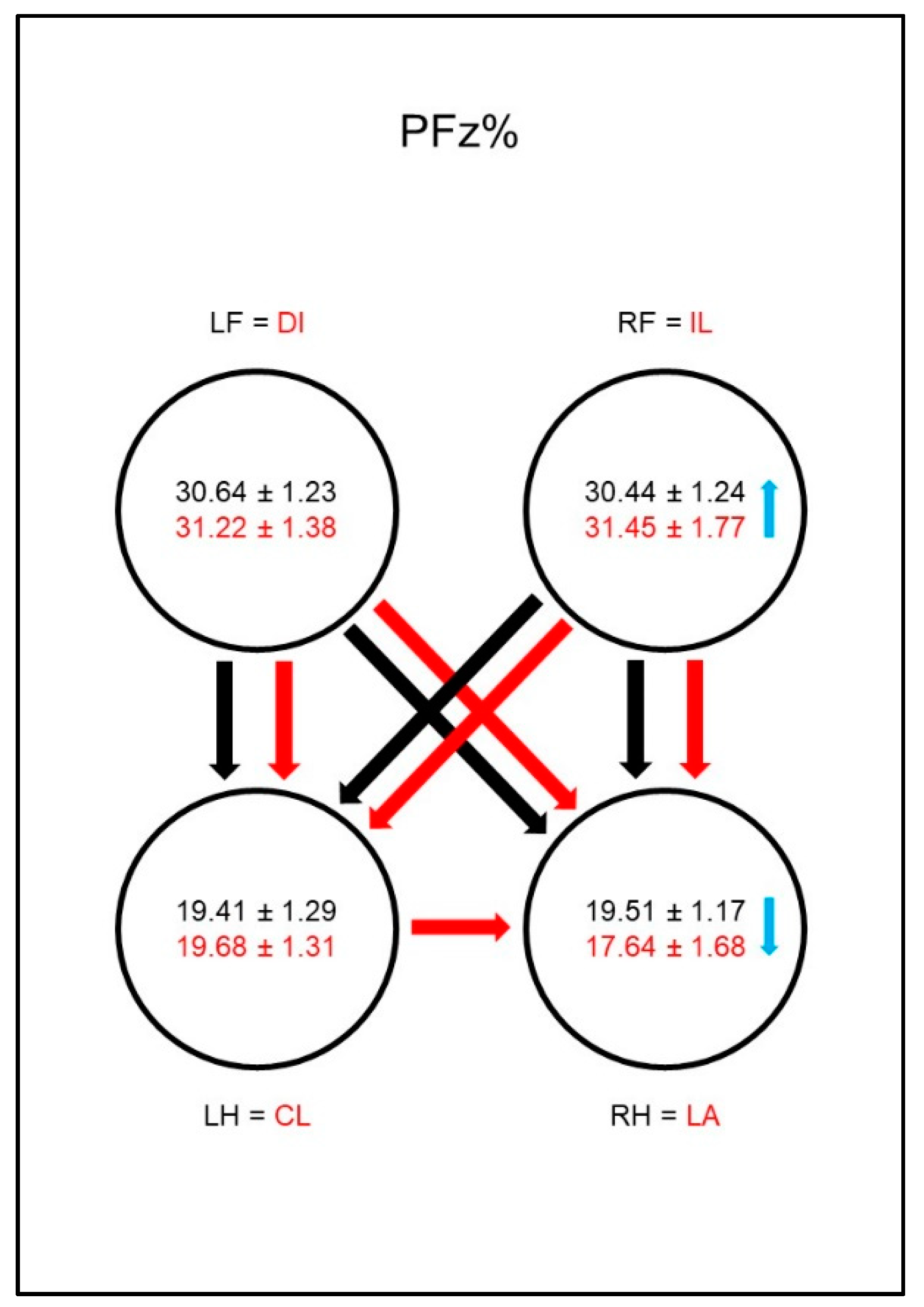 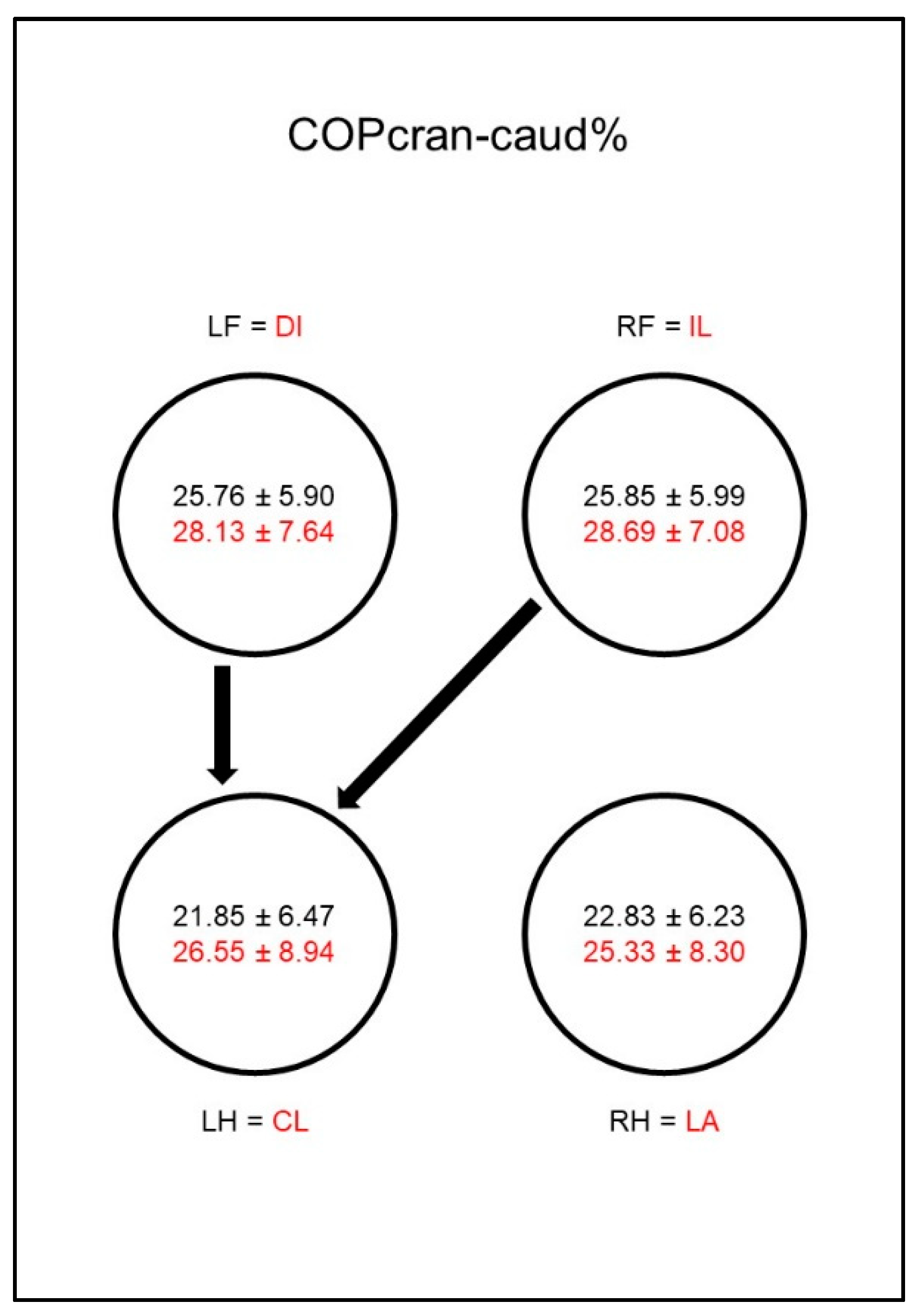 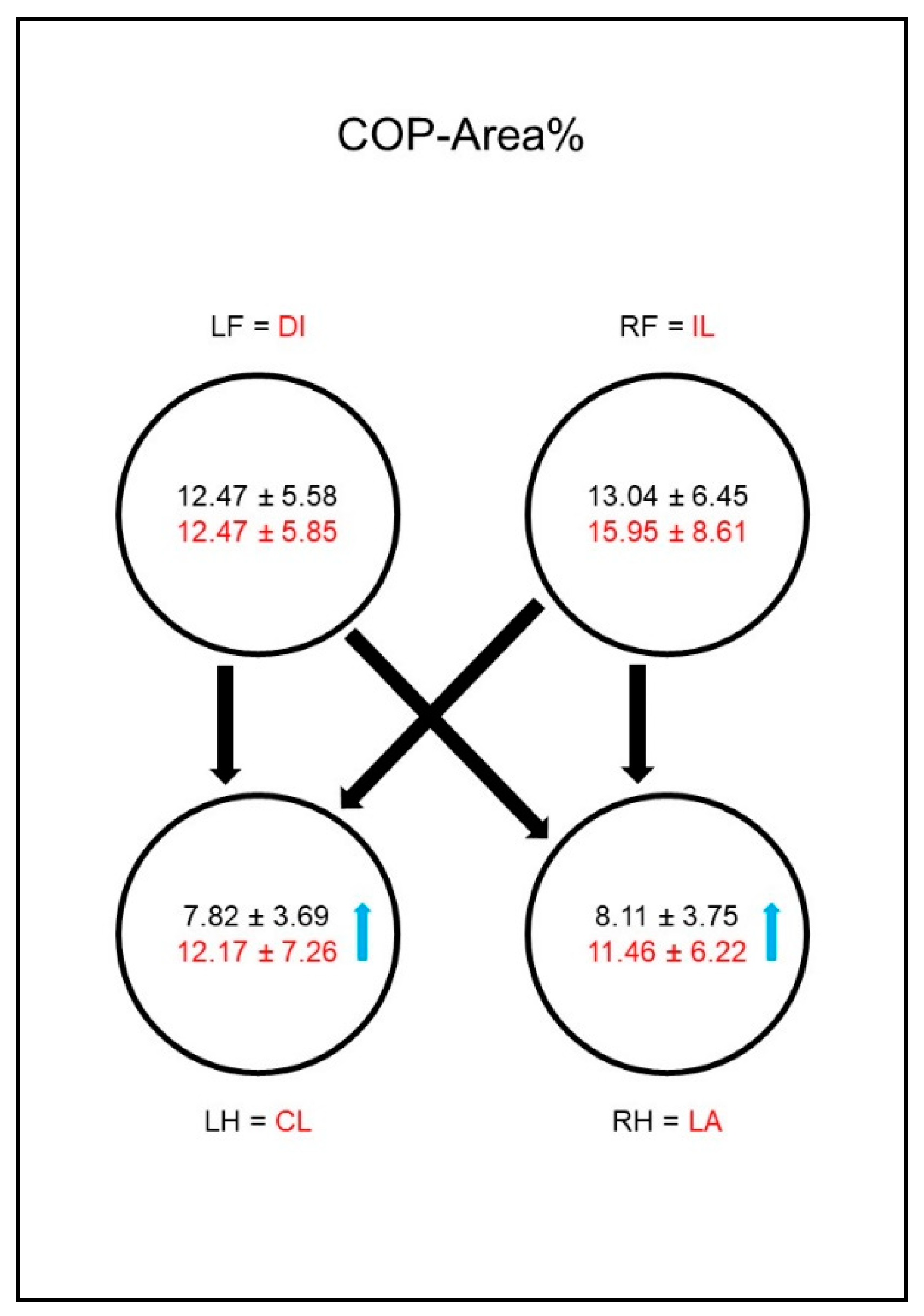 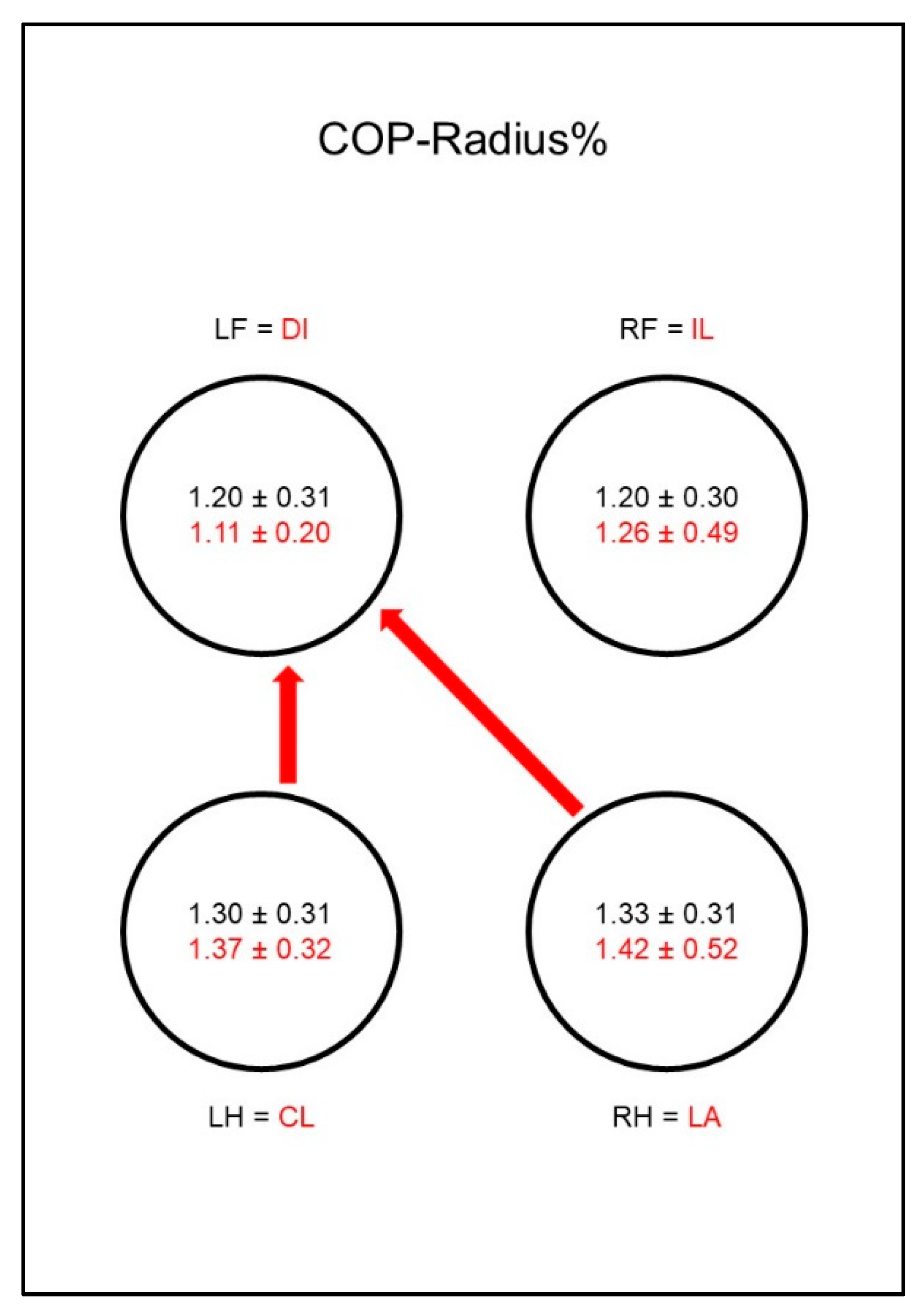 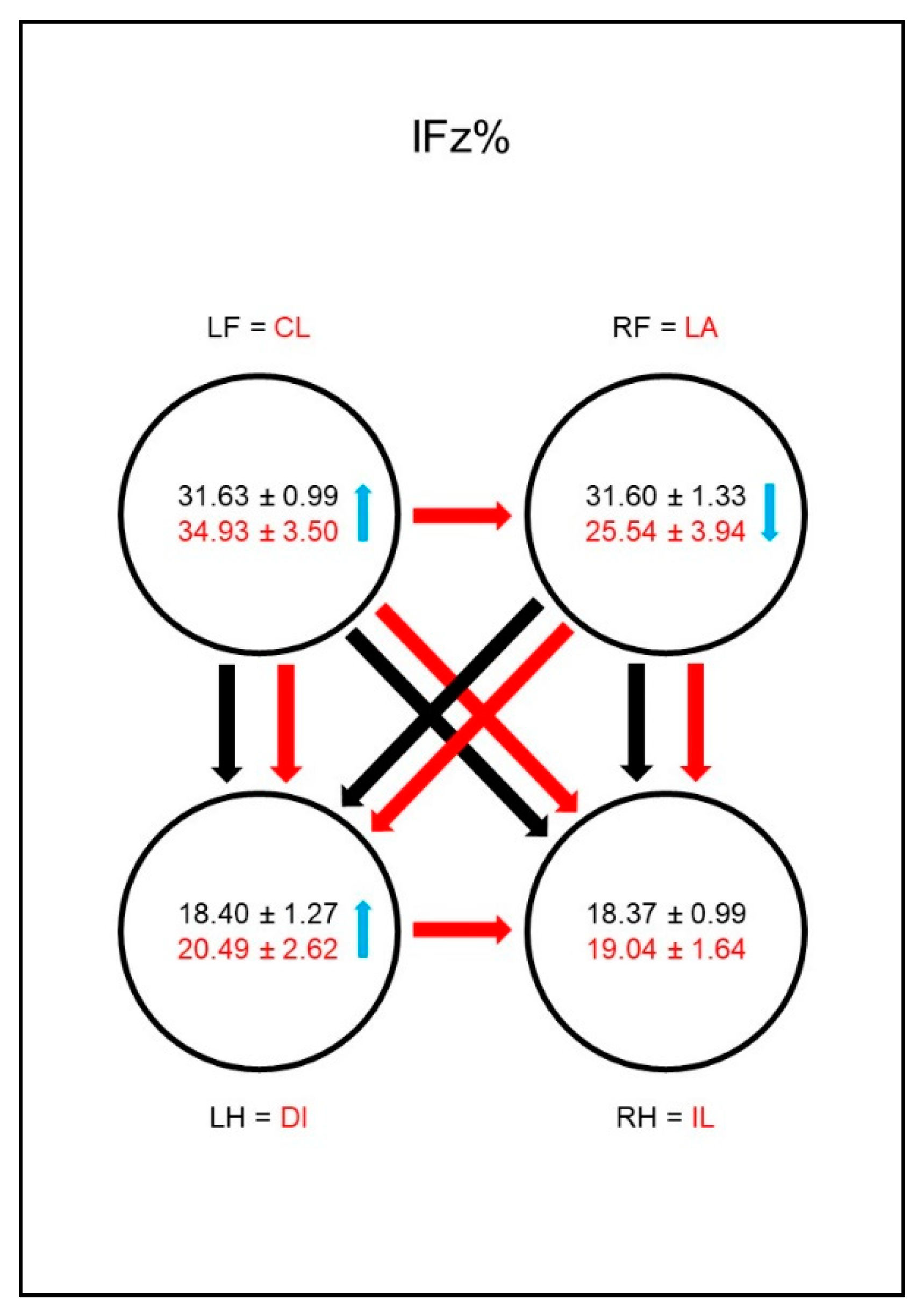 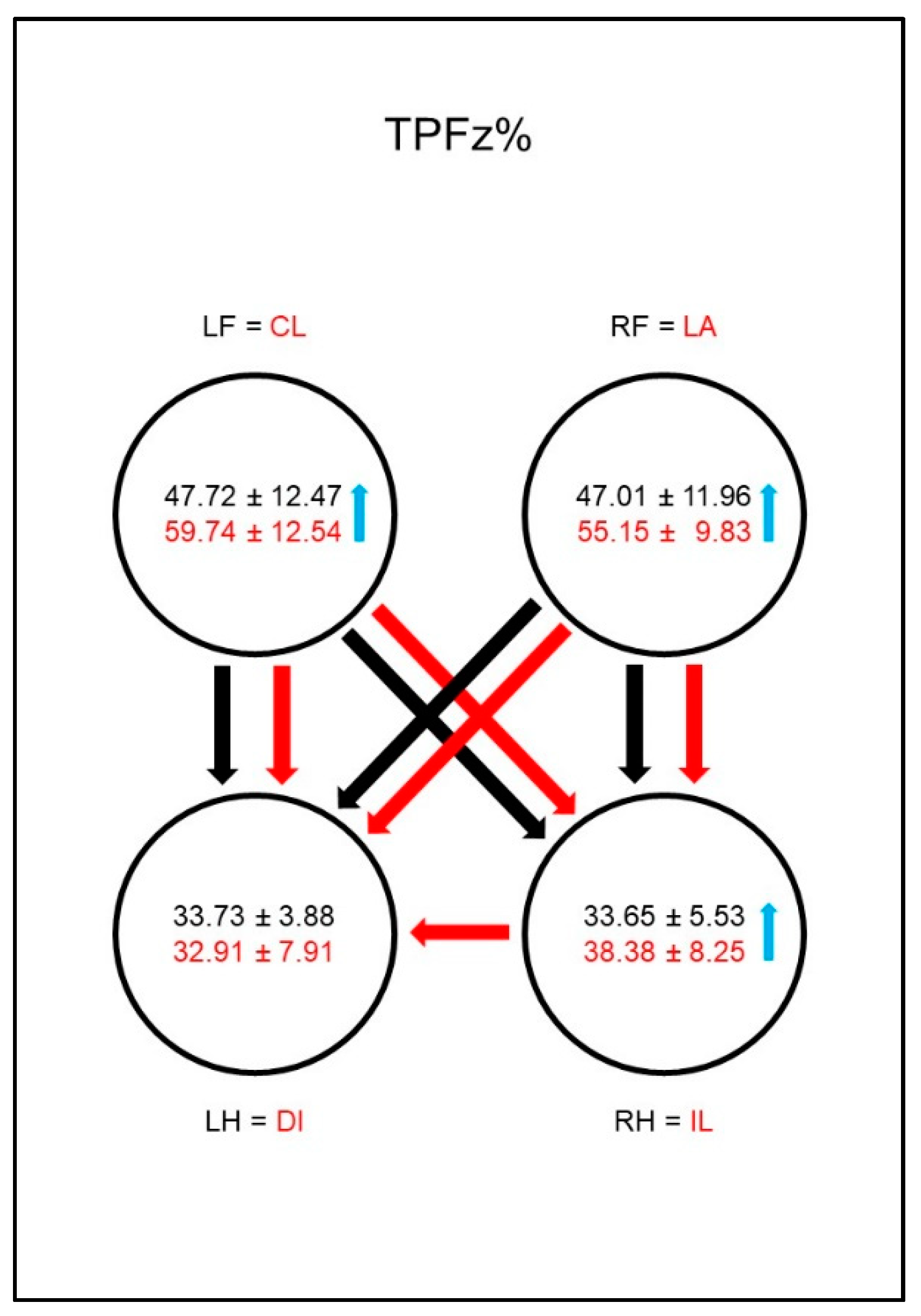 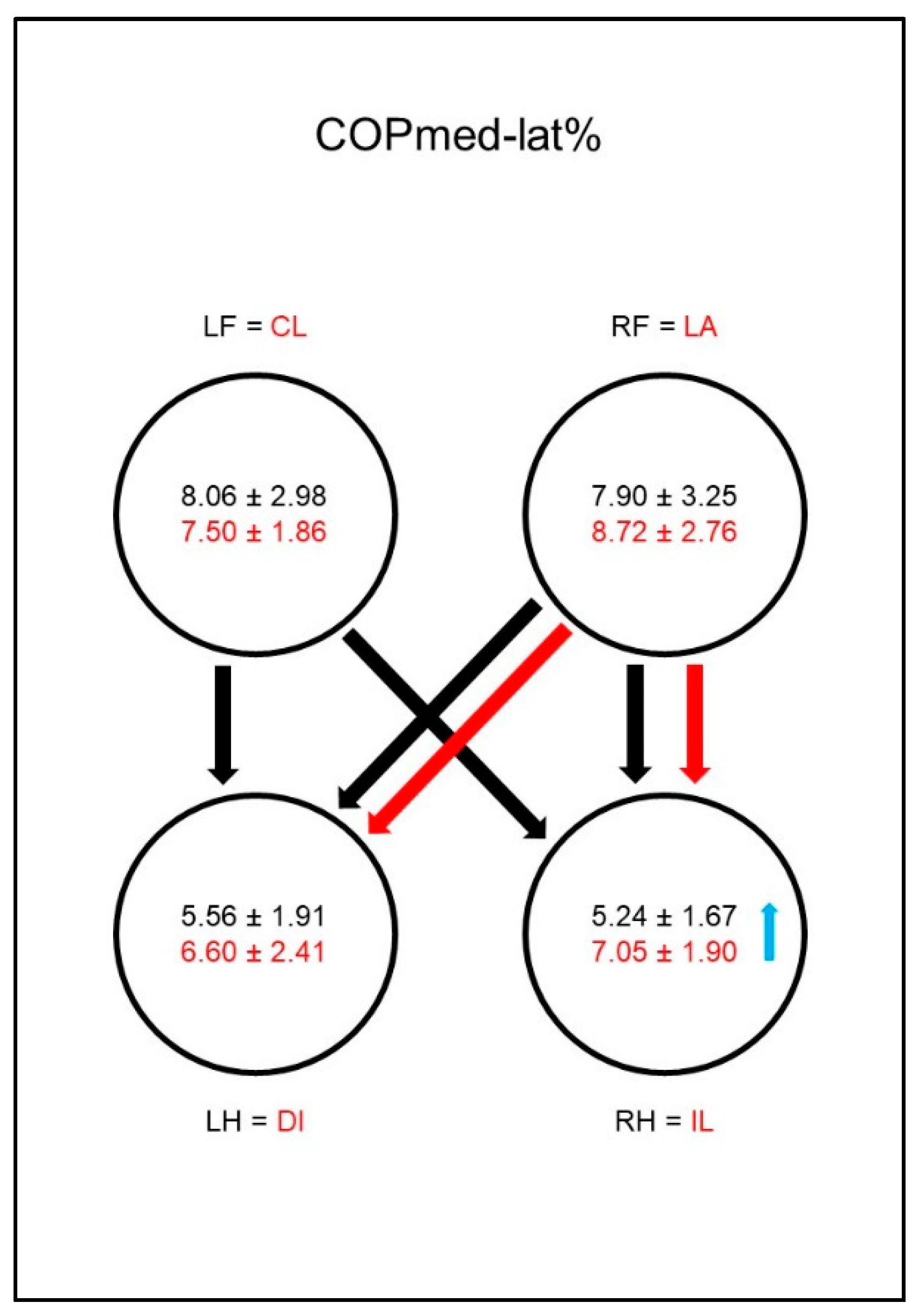 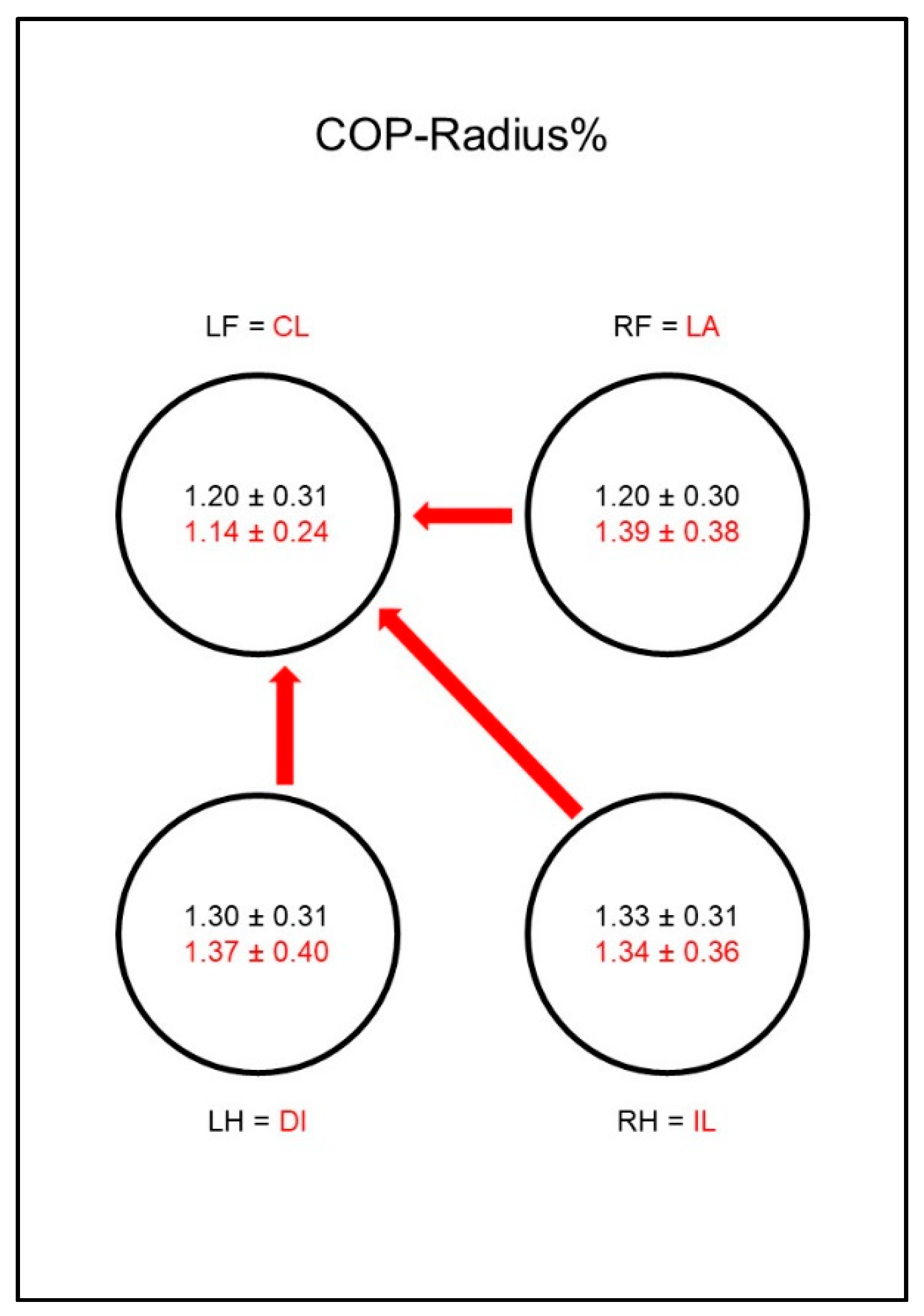