The Impact of Common Recovery Blood Sampling Methods, in Mice (Mus Musculus), on Well-Being and Sample Quality: A Systematic Review
Next Article in Special Issue

Surface Electromyography of the Longissimus and Gluteus Medius Muscles in Greyhounds Walking and Trotting on Ground Flat, Up, and Downhill

In the present study, we used a pressure plate to investigate the ground reaction forces of limbs and the vertical force distribution (VFD) within the paws of dogs with coxarthrosis. We included 23 sound dogs (GSou) and 23 dogs with hip osteoarthrosis (GCox). The dogs walked over a pressure plate and the peak vertical force (PFz), vertical impulse (IFz) as the percentage of the total force, and time of occurrence of PFz as a percent of the stance phase duration (TPFz%) were evaluated, as well for the entire limb as in the paws (where the paws were divided into four quadrants). The GCox presented a lower PFz% in the lame hind limb than in others and transferred the weight to the caudal quadrants of the front limbs. IFz% was lower in the lame limb and was counterbalanced through higher loading of the caudal quadrants in all unaffected limbs. TPFz% was reached later in the lame limb than in the contralateral limb and the GSou, specifically in the caudomedial quadrant. In conclusion, we found complex compensatory effects of lameness in the hind limb, and this methodology was useful to define the VFD within the paws of dogs. View Full-Text
Keywords: coxarthrosis; dogs; gait analysis; paw; pressure plate; vertical force distribution coxarthrosis; dogs; gait analysis; paw; pressure plate; vertical force distribution
►▼ Show Figures 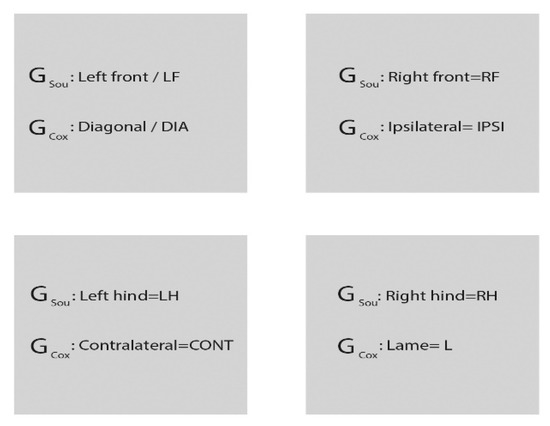