Shortening or omitting the dry period (DP) length were reported to improve fertility, indicated by an earlier onset of first ovulation postpartum [1] and overall improved resumption of ovarian cyclicity [1,2,3]. Consistent with the concept that earlier first ovulation may improve reproductive performance, omitting the DP was associated with an increased percentage of cows pregnant to first artificial insemination (AI) (55%, 26%, and 20% for 0-d, 28-d, and 56-d DP, respectively) and decreased days open (94, 121, and 145 d for 0-d, 28-d, and 56-d DP, respectively) [4]. Moreover, in another study, first-service pregnancy rate was greater in multiparous cows with a 35-d DP compared with cows with a longer DP [5]. In some other studies, however, no effects of DP length on pregnancy rate and days open were found after a short DP [6,7] or an omitted DP [7]. In all these studies, a postpartum dietary energy level was not adjusted to the lower milk yield for cows with 0-d DP or a short DP, compared with cows with a conventional DP.
Unfavorable consequences of omitting the DP can be a reduction in milk yield and fattening of cows in the subsequent lactation [8]. Adjusting dietary energy level in early lactation could be a strategy to limit these negative consequences [9]. Earlier, we reported that reducing postpartum dietary energy level for cows with 0-d DP did not affect milk yield or milk composition, but resulted in a less positive energy balance (EB) and less body weight gain in the subsequent lactation, compared with cows fed postpartum a standard energy level after no DP [9]. Moreover, cows with no DP and low postpartum dietary energy level (0-d DP (LOW)) had less days open than cows with no or a short DP and standard postpartum dietary energy level (0-d DP (STD) or 30-d DP (STD)). Days open is influenced by both the interval between calving to insemination and the success of an insemination [10]. Resumption of ovarian cyclicity, which is a combined trait consisting of onset of ovarian activity and regularity of the ovarian cycles, is related with the timing of the first insemination and success of insemination [11]. It can be hypothesized that the reduced days open for cows with 0-d DP (LOW), as we saw earlier [9], is related with an improved resumption of ovarian cyclicity or an increased conception rate after insemination or both.
Improvement in reproductive performance related with a reduction in DP length can be associated with an improved EB and metabolic status [1,3,4]. Concentrations of plasma glucose, IGF-I, and insulin were greater, but milk yield, plasma concentrations of non-esterified fatty acids (NEFA), and liver tri-acyl glycerides (TAG) were lower for cows after a 0-d DP than for cows after a 30-d or 60-d DP [3]. These endocrine and metabolic factors were associated with ovarian activity postpartum [12,13,14]. Elevated concentrations of NEFA and β-hydroxybutyrate (BHB) in plasma reduced oocyte and blastocyst quality in vitro [15,16] and were associated with a later onset of luteal activity (OLA) in vivo [3,17]. In particular, IGF-1 and insulin are key factors for the ovarian function because they both stimulate estradiol-17β production in granulosa cells in vitro [18,19] and proliferation of follicular cells [20,21] in vitro. Contradicting, high plasma insulin concentration had negative effects on oocyte maturation in vitro [15] and insulin stimulating diets are possibly beneficial to establish ovarian activity postpartum, but not to establish pregnancy [16]. Therefore, it can be hypothesized that for reproductive performance, with days open being the net result of resumption of ovarian cyclicity and pregnancy rates, an optimal energy balance and metabolic status would be essential rather than a maximal EB or insulin concentration.
Earlier, we reported consequences of reducing postpartum dietary energy level for cows after no DP on energy balance, metabolic status and days open, as compared with cows after 0-d DP or a short DP with standard dietary energy level [9]. The overall aim of the current study was to unravel the effect of reducing postpartum dietary energy level on days open for cows after 0-d DP. The first objective of the current study was to investigate the effects of reducing postpartum dietary energy level for cows after 0-d DP on resumption of ovarian cyclicity, and reproductive performance, as compared with cows after 0-dDP or 30-d DP with standard postpartum dietary energy level. The second objective of this study was to relate days open with other reproductive measures. The third objective of this study was to relate OLA and days open with metabolic status in early lactation.

The Institutional Animal Care and Use Committee of Wageningen University & Research approved the experimental protocol in compliance with the Dutch law on Animal Experimentation as described earlier (protocol number 2014125; Van Hoeij et al., 2017). The experiment was performed from 27 January 2014 until 9 May 2016. Holstein-Friesian dairy cows (n = 128) at Dairy Campus research farm (Lelystad, The Netherlands) were selected based on (1) expected calving interval < 490 days, (2) daily milk yield > 16 kg at 90 days before the expected calving date and (3) no clinical mastitis and SCC < 250,000 cells/mL at 2 final test days before conventional drying off day. Cows pregnant with twins were excluded from the study. Cows were housed in a free stall barn with a slatted floor and cubicles and were milked twice daily (6:00 and 18:00 h). Cows with a 30-d DP were fed a dry cow ration from 7 days before drying off and milked once daily from 4 days before drying off. 0-d dry period cow antibiotics were used in any of the cows in this study.

The experiment was originally designed to study the effects of DP length, dietary energy level, and mid-lactation ration (glucogenic or lipogenic ration) on milk production, milk composition, EB, plasma metabolites, and lactation persistency during a complete lactation [9]. Cows were blocked by expected calving date, milk yield in previous lactation and parity. We aimed for 40 cows per transition treatment, but because of the long-term characteristic of this experiment we included 2 spare blocks and when cows had to be omitted before calving they were replaced. Within each block of 6 cows, 4 cows were assigned randomly to 0-d dry period (0-d DP) and 2 cows to a short dry period of 30 days (30-d DP). Cows with a 0-d DP were assigned randomly to either a low postpartum dietary energy level (LOW) or a standard postpartum dietary energy level (STD) in early lactation. In the first 3 weeks after calving, dietary energy level was the same for all 3 transition treatments: all cows received 1 kg of concentrate from 10 days before the expected calving date and from 4 DIM concentrate supply increased stepwise for all transition treatments with 0.3 kg/d until 6.7 kg/d at 22 DIM [9]. For cows fed the STD diet, concentrate supply was increased further until 8.5 kg/d at 28 DIM, resulting in a dietary energy level contrast (LOW vs. STD) from 22 DIM onwards (Figure 1). A standard dietary energy level was based on the energy requirement for expected milk yield of 30-d DP cows [21]. All 30-d DP cows were fed an STD. A low dietary energy level was based on the energy requirement for expected milk yield of cows with 0-d DP [21]. Thus, all cows were assigned to one of 3 transition treatments: 0-d DP (LOW) (n = 42), 0-d DP (STD) (n = 43), 30-d DP (STD) (n = 43) (Table 1). From week 8 postpartum onwards, cows received either a glucogenic or lipogenic basal ration. Preliminary analysis showed that mid-lactation ration (glucogenic vs. lipogenic ration) did not affect days open or ovarian cyclicity in the first 100 days in milk (DIM) and was therefore not included in the analysis of this study.

Milk samples were collected three times a week (Monday, Wednesday, and Friday) during morning milking from the day of parturition until 100 DIM. Samples were stored at −20 °C until analysis of progesterone (P4) concentration. Milk P4 concentration was measured in whole milk by enzyme immunoassay (Ridgeway Science Ltd., Gloucestershire, UK). The intra-assay and inter-assay coefficients of variation were 4.4% and 16.7%, respectively.

First OLA postpartum was defined within 100 DIM as the moment P4 was 4 ng/mL or higher for 2 or more consecutive milk samples. Ovarian cycle length was defined as the number of days between OLA in one ovarian cycle and the OLA in next ovarian cycle. Regularity of ovarian cyclicity of cows was classified into one of 3 groups according to P4 profile from parturition until 100 DIM [3]:
The percentages of the different type of cycles per cow were calculated within 100 DIM.

Cows were inseminated after a voluntary waiting period (VWP) of 50 days until at least 170 DIM. Artificial insemination was performed 12 h after oestrous detection by Lely Qwes-HR Activity Tags (Lely, Maassluis, The Netherlands). Every 4 weeks, pregnancy of cows that were inseminated more than 30 days ago was checked by ultrasound.

The actual dry period length (DP) of cows with 30-d DP (STD) was 30 ± 6 d, the DP of cows with 0-d DP (LOW) or 0-d DP (STD) was 0 d. Results on EB and metabolic status after different transition treatments in the current experiment were reported earlier [9]. In short, reducing the level of energy in early lactation for cows after 0-d DP reduced EB both from week 4 till 7 [9] and from week 8 till 44 [23] postpartum, compared with a standard energy level after 0-DP. Postpartum, EB of cows with a 30-DP was more negative than of cow with a 0-d DP, the more negative EB was reflected in a greater plasma NEFA and BHB concentration, and a lower plasma glucose, insulin and IGF-1 concentration during weeks 4 and 7, compared with cows with a 0-d DP.

3.1. Effect of Transition Treatments on Days Open and Ovarian Activity

3.3. Relationships between Onset of Luteal Activity and Metabolic Status

Reducing postpartum dietary energy level for older cows (parity ≥ 3) after no DP (0-d DP (LOW)) improved fertility by reducing the interval from calving to OLA, reducing services per conception and consequently reducing days open compared with a standard dietary energy level after no DP (0-d DP (STD)) or after 30 d (30-d DP (STD)). Less days to OLA (<21 d) was associated with a better metabolic status, indicated by a greater concentration of glucose, IGF-1, and insulin and a lower concentration of NEFA and BHBA during weeks 1 through 7 postpartum. A low number of days open (< 80-d) was associated with less days to OLA, less services per conception, better EB in week 1 till 7 of lactation and better metabolic status. Energy balance in week 1 till 14 of lactation, however, was not linearly related with days open. This might indicate that cows with an intermediate EB in week 1 till 14 of lactation (0-d DP (LOW)) had a more optimal EB to support fertility than cows with a positive EB (0-d DP (STD)) or cows with most negative EB (30-d DP (STD)) in week 1 till 14 of lactation.

This experiment was funded by DairyNL (Zuivel NL; organization of the Dutch dairy supply chain, The Netherlands) and the Dutch Ministry of Economic Affairs (EZ, The Netherlands). This study is part of the PhD study of Junnan Ma for which she received a scholarship from China Scholarship Council.

We thank Ger de Vries Reilingh and Rudi Koopmanschap for their technical support and laboratory analyses during the experiment. 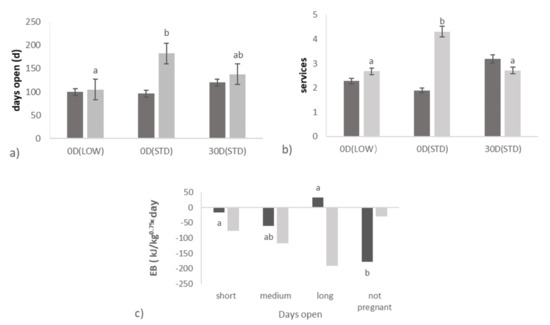 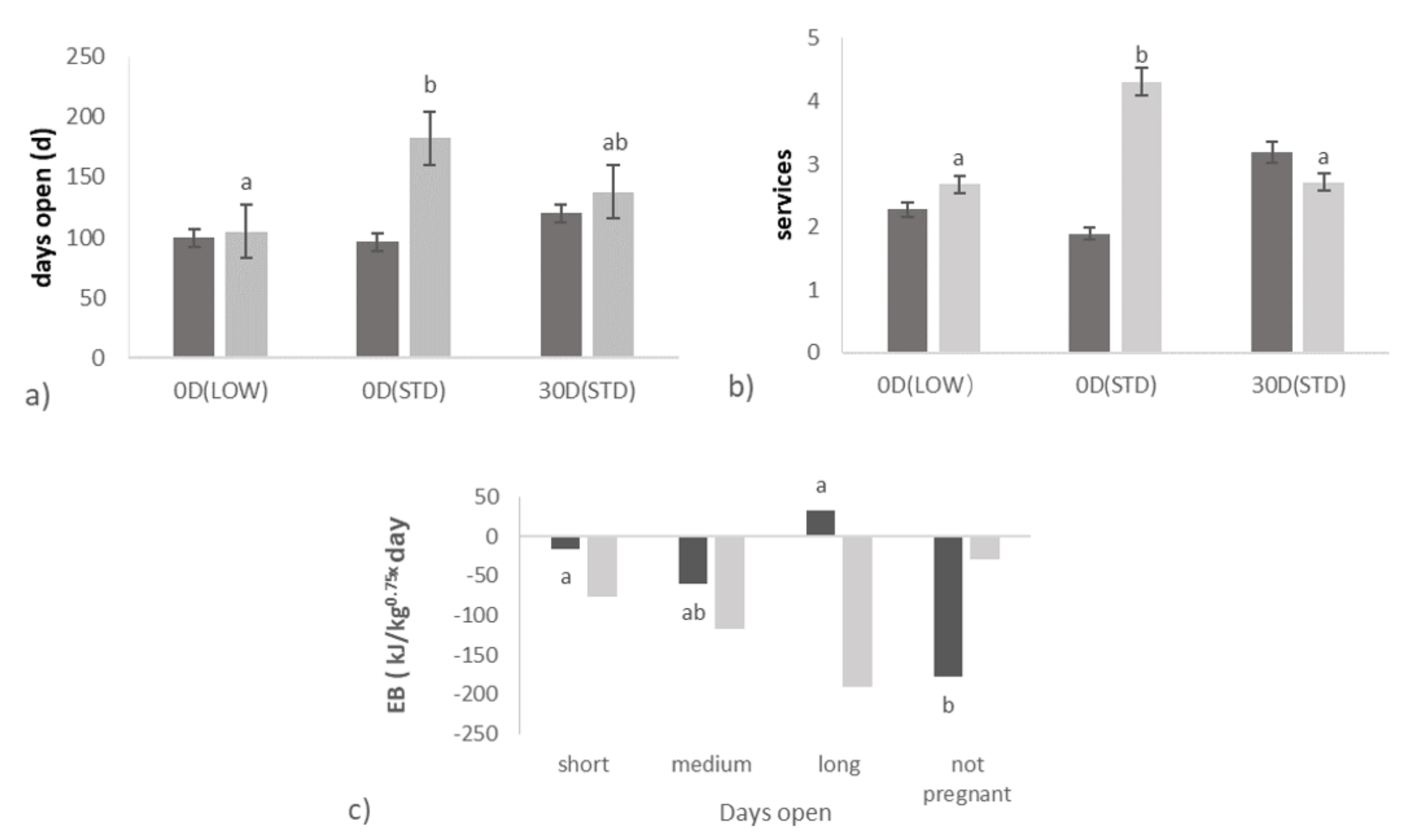