Holistic animal welfare assessment requires measures for emotional (affective) state, in particular positive states. Pharmacological agents such as antidepressants that create a predictable positive affective state can be valuable tools to assess novel welfare biomarkers. However, efficacy of pharmacological action in the brain needs to be demonstrated before such an approach is applicable. Counterintuitively, in humans and sheep, effective delivery of antidepressant agent, i.e., selective serotonin reuptake inhibitors, has been demonstrated by an increase in downstream cortisol levels. Here, we tested the efficacy of measuring circulating cortisol as an indicator for effective delivery of a single intravenous dose of the selective serotonin reuptake inhibitor fluoxetine hydrochloride to the pig brain. Antidepressant treatment resulted in increased plasma cortisol levels 15–165 min after treatment as compared with saline controls, suggesting that, similar to the other species, plasma cortisol is an indicator of fluoxetine hydrochloride efficacy. However, individual cortisol profiles of pigs treated with the antidepressant were highly variable with either the expected—an unorthodox, or no response. We conclude that significant inter-individual variation in cortisol response currently precludes the use of cortisol as a reporter for fluoxetine hydrochloride efficacy in the pig. These data need to be verified in a larger study.

Animal welfare assessment requires measures for positive affective state. Pharmacological agents that manipulate affective state can be used to evaluate novel biomarkers for affective state assessment. However, to validate that an agent has modified brain function, a reliable indicator is required. Circulating cortisol has been used as a reporter for effective delivery of the antidepressant selective serotonin reuptake inhibitor (SSRI) fluoxetine hydrochloride to the brain in humans and sheep. Here, we tested cortisol as a reporter for effective delivery of fluoxetine hydrochloride to the pig brain. We hypothesized that following administration of SSRI, innervation of the serotonergic reward pathway would result in activation of the hypothalamic-pituitary-adrenal (HPA) axis, leading to increased circulating cortisol levels. Large White-Landrace gilts received either a single intravenous dose of 100 mg fluoxetine hydrochloride suspended in 10 mL saline (n = 4), or 10 mL saline alone (n = 4). Blood samples were collected every 15 min for one hour prior to, and six hours post-treatment. The interaction of treatment x time on mean plasma cortisol levels between 15–165 min post-treatment was significant (p = 0.048) with highest cortisol concentrations of SSRI treated pigs versus controls (+ 98%) at 135 min post-treatment. However, individual cortisol profiles after SSRI treatment revealed high inter-individual variation in response. We conclude that, while combined data imply that plasma cortisol may be a readout for SSRI efficacy, inter-individual variation in SSRI response may preclude application of this approach in the pig. Given the current limited sample size, further research to confirm these findings is needed. View Full-Text
Keywords: cortisol; antidepressant; fluoxetine hydrochloride; pig; affective state; welfare cortisol; antidepressant; fluoxetine hydrochloride; pig; affective state; welfare
►▼ Show Figures 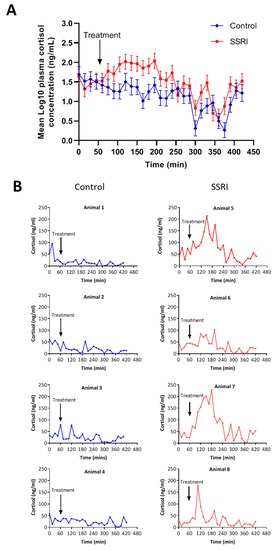