Glutamine Metabolism and Its Role in Immunity, a Comprehensive Review

The buffalo dairy industry has deep roots in Southern Italy, due to the traditional link with Mozzarella di Bufala, a Protected Designation of Origin cheese with high economic value and market demand. At farm level, strategies aiming to improve milk yield and quality are essential to maximize profitability and dairy chain efficiency. In this study, we analyzed a large data set of Italian Buffaloes (around 70 thousands animals) in order to detect the phenotypic sources of variation of milk yield and quality traits, disclose exploitable favorable correlations among milk traits, and provide useful information for dairy buffalo chain stakeholders.

The buffalo milk industry has economic and social relevance in Italy, as linked to the manufacture of traditional dairy products. To provide an overview of the current status of buffaloes’ performances on a large scale, almost 1 million milk test-day records from 72,294 buffaloes were available to investigate milk yield, energy corrected milk, fat, protein, and lactose content, and somatic cell score (SCS). Phenotypic correlations between milk traits were calculated and analysis of variance was carried out through a mixed model approach including fixed effect of parity, stage of lactation, sampling time, month of calving, and all their interactions and random effects of buffalo, herd-test-date, and residual. Third-parity buffaloes were the most productive in terms of milk yield, while the lowest solid content was detected in sixth parity buffaloes. A considerable gap between primiparous and multiparous buffaloes was observed for milk yield, especially in early- and mid-lactation. Overall, SCS progressively increased with parity and showed a negative correlation with milk yield in both primiparous (−0.12) and multiparous (−0.14) buffaloes. Results suggested that, at the industrial level, milk of primiparous buffaloes may be preferred for transformation purposes, since it was characterized by greater solid content and lower SCS. Results of this study provide a picture of the Italian population of buffaloes under systematic performance records and might be beneficial to both dairy industry and breeding organizations. View Full-Text
Keywords: Mediterranean Buffalo; phenotypic variation; milk quality; dairy Mediterranean Buffalo; phenotypic variation; milk quality; dairy
►▼ Show Figures 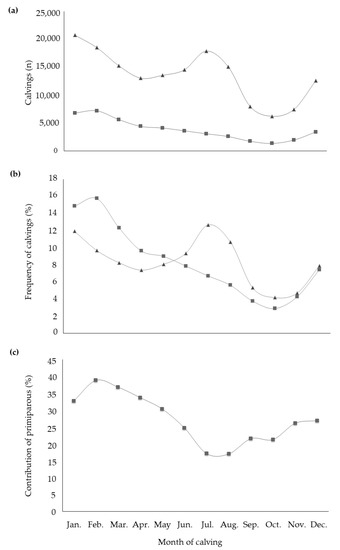