Are They Really Trying to Save Their Buddy? The Anthropomorphism of Animal Epimeletic Behaviours

Anthropomorphism, defined as attributing human traits to animals and other entities, seems to have appeared during evolution to improve an individual’s understanding of other species (or indeed the world in general). Yet anthropomorphism can have beneficial or harmful consequences especially for animals, and there seems to be little interest in monitoring the potential danger of this approach. Few studies have focused on the factors affecting how we attribute intentions or beliefs to animals, and more quantitative studies are needed to identify how and why humans attribute mental states and cognitive abilities to other animals. In this study, participants answer questions about three videos in which an individual (a sparrow, an elephant and a macaque, respectively) displayed behaviours towards an inanimate conspecific that suddenly regained consciousness at the end of the footage. A fourth video showed a robot dog being kicked by an engineer to demonstrate its stability. These questions were designed to measure how far participants attribute humanlike intentions, beliefs or mental states to non-human animals and robots. Men and older participants are less likely to attribute humanlike mental states to animals. Similarly, people who work with animals or have at least one pet at home demonstrated less naïve anthropomorphism. Conversely, we found that members of animal protection associations showed more biophilia (affinity for other living organisms), attributed more intentions and mental states to animals and were further from biological reality (current scientific knowledge of each species) than non-members. Understanding the potential usefulness of these factors can lead to better relationships with animals and encourage human-robot interactions.

Anthropomorphism is a natural tendency in humans, but it is also influenced by many characteristics of the observer (the human) and the observed entity (here, the animal species). This study asked participants to complete an online questionnaire about three videos showing epimeletic behaviours in three animal species. In the videos, an individual (a sparrow, an elephant and a macaque, respectively) displayed behaviours towards an inanimate conspecific that suddenly regained consciousness at the end of the footage. A fourth video showed a robot dog being kicked by an engineer to demonstrate its stability. Each video was followed by a series of questions designed to evaluate the degree of anthropomorphism of participants, from mentaphobia (no attribution of intentions and beliefs, whatever the animal species) to full anthropomorphism (full attribution of intentions and beliefs by animals, to the same extent as in humans) and to measure how far the participants had correctly assessed each situation in terms of biological reality (current scientific knowledge of each species). There is a negative correlation (about 61%) between the mental states attributed to animals by humans and the real capability of animals. The heterogeneity of responses proved that humans display different forms of anthropomorphism, from rejecting all emotional or intentional states in animals to considering animals to show the same intentions as humans. However, the scores participants attributed to animals differed according to the species shown in the video and to human socio-demographic characteristics. Understanding the potential usefulness of these factors can lead to better relationships with animals and encourage a positive view of human-robot interactions. Indeed, reflective or critical anthropomorphism can increase our humanity. View Full-Text
Keywords: empathy; comparative thanatology; cognitive biases; animal ethics; mentaphobia; primates; elephants; birds; robot empathy; comparative thanatology; cognitive biases; animal ethics; mentaphobia; primates; elephants; birds; robot
►▼ Show Figures 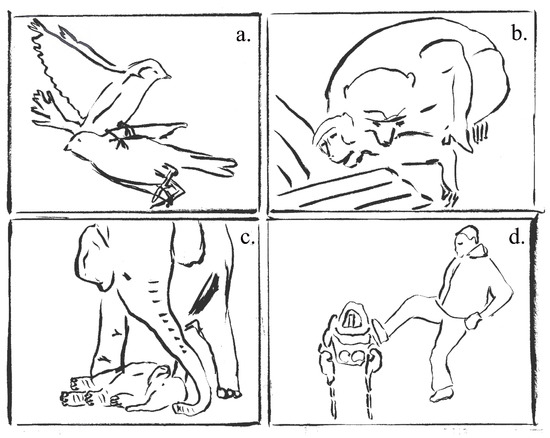