Microbial Diversity of Terrestrial Geothermal Springs in Armenia and Nagorno-Karabakh: A Review
Next Article in Special Issue

Background: The emergence of multidrug-resistant bacteria remains poorly understood in the wild ecosystem and at the interface of habitats. Here, we explored the spread of Escherichia coli containing IncI1-ST3 plasmid encoding resistance gene cefotaximase-Munich-1 (blaCTX-M-1) in human-influenced habitats and wild fauna using a genomic approach. Methods. Multilocus sequence typing (MLST), single-nucleotide polymorphism comparison, synteny-based analysis and data mining approaches were used to analyse a dataset of genomes and circularised plasmids. Results. CTX-M-1 E. coli sequence types (STs) were preferentially associated with ecosystems. Few STs were shared by distinct habitats. IncI1-ST3-blaCTX-M-1 plasmids are disseminated among all E. coli phylogroups. The main divergences in plasmids were located in a shuffling zone including blaCTX-M-1 inserted in a conserved site. This insertion hot spot exhibited diverse positions and orientations in a zone-modulating conjugation, and the resulting synteny was associated with geographic and biological sources. Conclusions. The ecological success of IncI1-ST3-blaCTX-M-1 appears less linked to the spread of their bacterial recipients than to their ability to transfer in a broad spectrum of bacterial lineages. This feature is associated with the diversity of their shuffling conjugation region that contain blaCTX-M-1. These might be involved in the resistance to antimicrobials, but also in their spread. View Full-Text
Keywords: Escherichia coli; β-lactamase; plasmid; CTX-M-1; IncI1-ST3 Escherichia coli; β-lactamase; plasmid; CTX-M-1; IncI1-ST3
►▼ Show Figures 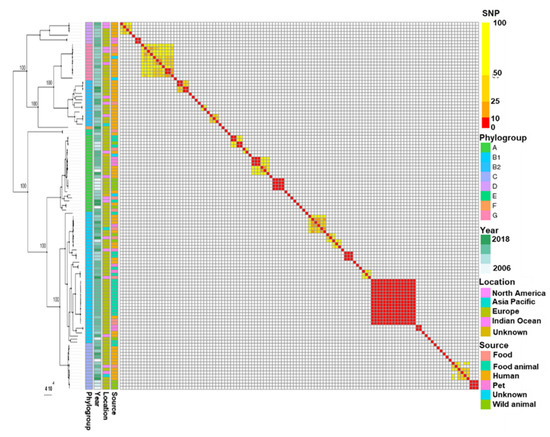