Stool Serology: Development of a Non-Invasive Immunological Method for the Detection of Enterovirus-Specific Antibodies in Congo Gorilla Faeces
Previous Article in Special Issue

Poa annua (annual bluegrass) is one of the most ubiquitous grass species in the world. In isolated regions of maritime Antarctica, it has become an invasive organism threatening native tundra communities. In this study, we have explored and compared the rhizosphere and root-endosphere dwelling microbial community of P. annua specimens of maritime Antarctic and Central European origin in terms of bacterial phylogenetic diversity and microbial metabolic activity with a geochemical soil background. Our results show that the rhizospheric bacterial community was unique for each sampling site, yet the endosphere communities were similar to each other. However, key plant-associated bacterial taxa such as the Rhizobiaceae family were poorly represented in Antarctic samples, probably due to high salinity and heavy metal concentrations in the soil. Metabolic activity in the Antarctic material was considerably lower than in Central European samples. Antarctic root endosphere showed unusually high numbers of certain opportunistic bacterial groups, which proliferated due to low competition conditions. Thirteen bacterial families were recognized in this study to form a core microbiome of the P. annua root endosphere. The most numerous were the Flavobacteriaceae, suspected to be major contributors to the ecological success of annual bluegrass, especially in harsh, Antarctic conditions. View Full-Text
Keywords: rhizosphere; microbiome; endosphere; roots; invasive species rhizosphere; microbiome; endosphere; roots; invasive species
►▼ Show Figures 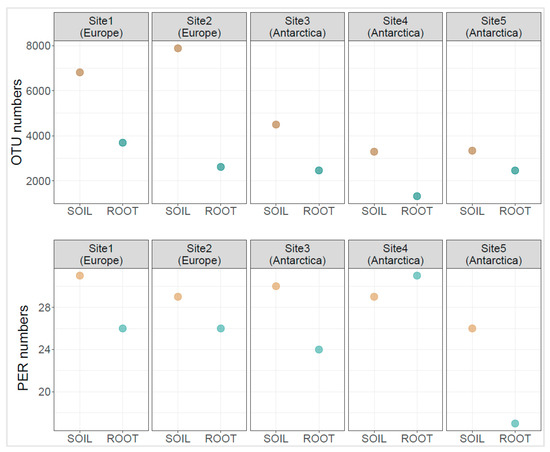