Surveillance of SARS-CoV-2 in Frankfurt am Main from October to December 2020 Reveals High Viral Diversity Including Spike Mutation N501Y in B.1.1.70 and B.1.1.7
Previous Article in Journal

Production of Monacolin K in Monascus pilosus: Comparison between Industrial Strains and Analysis of Its Gene Clusters

Symphyonema bifilamentata sp. nov., the Right Fischerella ambigua 108b: Half a Decade of Research on Taxonomy and Bioactive Compounds in New Light

Since 1965 a cyanobacterial strain termed ‘Fischerella ambigua 108b’ was the object of several studies investigating its potential as a resource for new bioactive compounds in several European institutes. Over decades these investigations uncovered several unique small molecules and their respective biosynthetic pathways, including the polychlorinated triphenyls of the ambigol family and the tjipanazoles. However, the true taxonomic character of the producing strain remained concealed until now. Applying a polyphasic approach considering the phylogenetic position based on the 16S rRNA and the protein coding gene rbcLX, secondary structures and morphological features, we present the strain ‘Fischerella ambigua 108b’ as Symphyonema bifilamentata sp. nov. 97.28. Although there is the type species (holotype) S. sinense C.-C. Jao 1944 there is no authentic living strain or material for genetic analyses for the genus Symphyonema available. Thus we suggest and provide an epitypification of S. bifilamentata sp. nov. 97.28 as a valid reference for the genus Symphyonema. Its affiliation to the family Symphyonemataceae sheds not only new light on this rare taxon but also on the classes of bioactive metabolites of these heterocytous and true-branching cyanobacteria which we report here. We show conclusively that the literature on the isolation of bioactive products from this organism provides further support for a clear distinction between the secondary metabolism of Symphyonema bifilamentata sp. nov. 97.28 compared to related and other taxa, pointing to the assignment of this organism into a separate genus. View Full-Text
Keywords: Symphyonema; true-branching; heterocytes; ambigol; polyphasic approach; Fischerella Symphyonema; true-branching; heterocytes; ambigol; polyphasic approach; Fischerella
►▼ Show Figures 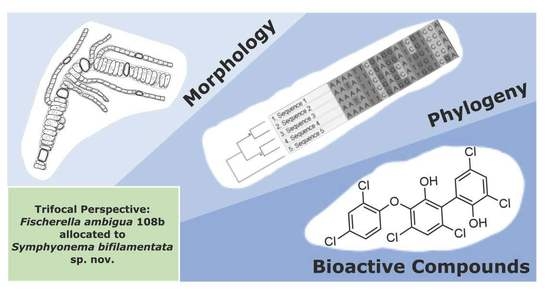