Effects of Lactic Acid Bacterial Inoculants on Fermentation Quality, Bacterial Community, and Mycotoxins of Alfalfa Silage under Vacuum or Nonvacuum Treatment
Next Article in Special Issue

Allocation of Carbon from an Arbuscular Mycorrhizal Fungus, Gigaspora margarita, to Its Gram-Negative and Positive Endobacteria Revealed by High-Resolution Secondary Ion Mass Spectrometry

A Transcriptomic Atlas of the Ectomycorrhizal Fungus Laccaria bicolor

Trees are able to colonize, establish and survive in a wide range of soils through associations with ectomycorrhizal (EcM) fungi. Proper functioning of EcM fungi implies the differentiation of structures within the fungal colony. A symbiotic structure is dedicated to nutrient exchange and the extramatricular mycelium explores soil for nutrients. Eventually, basidiocarps develop to assure last stages of sexual reproduction. The aim of this study is to understand how an EcM fungus uses its gene set to support functional differentiation and development of specialized morphological structures. We examined the transcriptomes of Laccaria bicolor under a series of experimental setups, including the growth with Populus tremula x alba at different developmental stages, basidiocarps and free-living mycelium, under various conditions of N, P and C supply. In particular, N supply induced global transcriptional changes, whereas responses to P supply seemed to be independent from it. Symbiosis development with poplar is characterized by transcriptional waves. Basidiocarp development shares transcriptional signatures with other basidiomycetes. Overlaps in transcriptional responses of L. bicolor hyphae to a host plant and N/C supply next to co-regulation of genes in basidiocarps and mature mycorrhiza were detected. Few genes are induced in a single condition only, but functional and morphological differentiation rather involves fine tuning of larger gene sets. Overall, this transcriptomic atlas builds a reference to study the function and stability of EcM symbiosis in distinct conditions using L. bicolor as a model and indicates both similarities and differences with other ectomycorrhizal fungi, allowing researchers to distinguish conserved processes such as basidiocarp development from nutrient homeostasis. View Full-Text
Keywords: ectomycorrhiza; symbiosis; carpophore; nitrogen; phosphorus; transcriptome ectomycorrhiza; symbiosis; carpophore; nitrogen; phosphorus; transcriptome
►▼ Show Figures 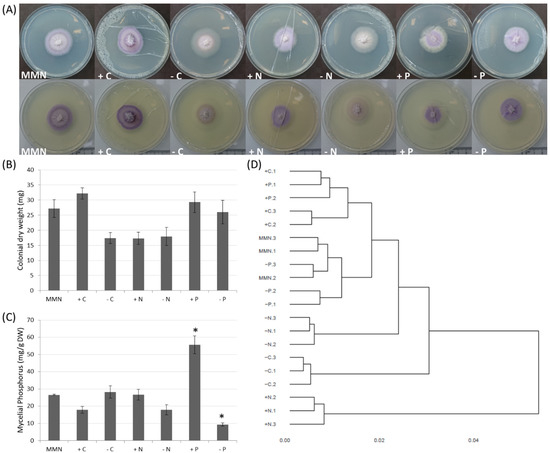