Re-Evaluation of the Order Sordariales: Delimitation of Lasiosphaeriaceae s. str., and Introduction of the New Families Diplogelasinosporaceae, Naviculisporaceae, and Schizotheciaceae
Next Article in Special Issue

Robin B. Gasser
1 and

Ticks are obligate blood-feeding ectoparasites of animals and humans that are distributed globally [1]. They can affect their hosts either directly by causing tick-associated stress, irritation, allergy, anemia, weight loss and paralysis or indirectly by transmitting numerous pathogenic microorganisms including bacteria, fungi, protozoa, rickettsiae, spirochetes and/or viruses [1,2,3]. In production animals such as cattle, buffaloes, goats and sheep, tick-borne protozoal (babesiosis and theileriosis) and rickettsial (anaplasmosis and cowdriosis) diseases cause major health problems as well as production and economic losses mainly in subtropical and tropical regions [1].
Pakistan is a subtropical country where the majority of the rural population is dependent upon livestock including small ruminants for their food and livelihood (Pakistani goat and sheep population: 31.2 million Ovis aries; 78.2 m Capra hircus), particularly in the Federally Administered Tribal Area (FATA) of the north-western part of the country [4,5]. The FATA is located near the Pak-Afghan border and represents one of the least-developed regions in Pakistan due to political unrest and prolonged military crises over the last 50 years. These areas consist of seven tribal agencies (districts) and six frontier regions, which have been recently merged [6]. Nomadic pastoralism is a common practice in this region and > 70% of the human population derives their livelihood from livestock farming [7]. Due to the poor infrastructure, limited resources and inadequate access to veterinary services, tick-borne diseases (TBDs) of humans and animals have a major impact in this region [7].
Although a number of studies have assessed the prevalence of ticks and tick-borne diseases (TTBDs) of small ruminants in different areas of Pakistan [8,9,10,11,12,13,14,15,16,17,18,19], there is a paucity of information from the FATA. Moreover, no study has yet investigated the presence, prevalence and diversity of tick-borne pathogens (TBPs) of small ruminants in this region. Recently, Khan et al. [20] assessed tick burdens on small ruminants in the FATA using morphological methods and found three main genera of ixodid ticks (Haemaphysalis, Hyalomma and Rhipicephalus) but these ticks and associated TBPs were not further characterized in detail using molecular tools.
Specific identification is pivotal for understanding the epidemiology of, and developing effective control strategies for, TTBDs [21]. However, morphological methods do not allow the identification of immature, engorged or damaged tick specimens [22,23]. By contrast, molecular methods provide an alternative and complementary approach for the identification of ticks [24], which employ the characterization of genetic markers such as the mitochondrial cytochrome c oxidase subunit I (cox1) and 16S ribosomal RNA genes [25,26]. As ticks usually harbor and transmit commensals and numerous pathogens, some of which can be of public health significance (e.g., Coxiella burnetii and Crimean-Congo hemorrhagic fever virus) [27,28,29], it is important to detect these microorganisms in ticks to ascertain their prevalence. However, conventional diagnostic methods such as microscopic examination of thin and thick smears usually detect few target pathogens or microorganisms and have a lower sensitivity and specificity than molecular approaches [30]. Therefore, testing ticks as well as their animal hosts using polymerase chain reaction (PCR) based methods for the detection of TBPs and/or commensals provides distinct advantages over conventional detection methods. Recently, a micro-chip-based microfluidic real-time PCR technique was developed to detect and differentiate up to 96 microorganisms per tick in a single PCR procedure [31]. This method has been proven to be well-suited for rapid and large-scale epidemiological and surveillance studies [28,31,32,33,34,35,36] and is anticipated to be an invaluable tool for the detection of microorganisms in ticks from regions such as the FATA.
In the present study, we employed both conventional and PCR-based tools to investigate the diversity of tick taxa from small ruminants and their associated TBPs and/or commensals in the FATA of Pakistan.

The FATA represents seven tribal districts in the north-western part of Pakistan (Figure 1). This region has a monsoonal climatic zone in the East and a Mediterranean one in the west such that seasons and rainfall can vary markedly across regions. In agriculture, livestock production is one of the main sources of subsistence for two-thirds of the population. The estimated population of small ruminants in the FATA is ~5.5 million [37].
A convenience sampling method was used to collect 104 hard ticks from sheep (n = 23) and goats (n = 31) from the five tribal districts of Bajaur, Khyber, Mohmand, North Waziristan and Orakzai (Figure 1; Table 1). Ticks were collected using tweezers from various body parts of the animals including ears, neck and the perineal region. Following tick collection, the specimens from individual animals were fixed in 70% ethanol in separate Eppendorf tubes, labelled and stored at an ambient temperature. The collection of ticks from the animals was approved by the Animal Ethics Committee of the Abdul Wali Khan University.

Using a dissecting microscope (Olympus SZ40, Olympus Corporation, Tokyo, Japan), individual ticks were morphologically identified to species employing dichotomous keys [23,38,39]. Subsequently, DNA was extracted from 54 individual ticks representing each host species in each tribal district. Briefly, following rehydration, each tick was cut in half longitudinally. One half of each tick was washed three times in 15 mL of H20 and then diced finely with a sterile scalpel blade. DNA was extracted using a DNeasy Blood and Tissue Kit (Qiagen, Hilden, Germany) following the manufacturer’s protocol, except that the proteinase K digestion step was for 24–48 h at 56 °C. The DNA concentration of each sample was estimated using a Nanodrop ND1000.

The sequences of cox1, 16S and ITS-2 (ticks) and 18S (TBPs) obtained were examined for quality and then assembled using the denovo assembly function in Geneious Prime 2019.0.4 (http://www.geneious.com). Duplicate sequences were removed using the “find duplicates” function in Geneious and sequences unique to each locus were aligned using MUSCLE v.3.8.31 [43] within MEGA 7.0 [44]. The BLASTn function of the National Centre for Biotechnology Information (NCBI) (https://blast.ncbi.nlm.nih.gov/Blast.cgi) was used to match the identities of individual sequences; sequence identity matrices were established using BioEdit [45]. After verifying that all cox1 sequences had open reading frames, all unique nucleotide sequences were deposited into the GenBank database (Table 1). Reference sequences for individual loci (representing ticks or TBPs) were obtained from GenBank and aligned. Sequences obtained for ticks were trimmed to consensus lengths of 409 (16S), 549 (cox1) and 293 (ITS-2) bp; sequences obtained for TBPs were aligned over 478 bp (18S).
Phylogenetic analyses were performed on individual 16S, cox1 and ITS-2 sequence datasets using the Bayesian Inference (BI), Neighbor Joining (NJ) and Maximum Likelihood (ML) methods. The BI was conducted using the MrBayes plugin within Geneious [46] whereas NJ and ML analyses were performed using MEGA. The best-fit evolutionary models were estimated separately for individual sequence alignments (Tamura 3-parameter model [47] with gamma-distribution for 16S, Tamura-Nei model [48] with a proportion of invariable sites and gamma distribution for cox1 and Tamura 3-parameter model [47] with a proportion of invariable sites for ITS-2) using the Bayesian information criteria in jModelTest v.3.7 [49]. The nodal support in NJ and ML trees was tested through bootstrap analyses (10,000 replicates). The posterior probabilities of BI analyses were calculated for 2,000,000 generations (ngen = 2,000,000), saving every 100th tree (samplefreq = 100). Phylogenetic trees of ticks were rooted using Argas (Ar.) persicus (16S: KJ13358, cox1: FN394341) and Haemaphysalis (Hs.) longicornis (ITS-2: HQ005301) as outgroups whereas those of TBPs were rooted using B. bigemina (18S: KF112076).

3.2. Sequence and Phylogenetic Analyses of Ticks

3.3. Diversity of Microorganisms in Ticks

3.4. Co-Occurrence of Microorganisms in Ticks

Of the 39 ticks found positive for microbes, DNA of one or more microorganisms was present in 11 (28.2%) and 28 (71.8%) ticks, respectively (Table 4). DNA of two, three, four, five or seven microorganisms was found in 28.6%, 39.2%, 25%, 3.6% and 3.6% ticks, respectively (Table 4). DNA of six microorganisms (A. ovis, A. centrale, R. slovaca, R. massiliae, Francisella-like and Theileria spp.) was present either as single or a mixed infection whereas DNA of the other five microbes was found only as mixed infections (Table 4). Rh. turanicus ticks were positive for a maximum of seven microorganisms followed by Hs. sulcata, Hy. anatolicum, Rh. haemaphysaloides and Rh. Microplus, which were positive for four and Hs. punctata for three (data not shown).

Phylogenetic analyses (using BI, ML and NJ) of the 18S sequence data for piroplasms determined herein (GenBank: MT799958) confirmed the presence of Th. ovis as it grouped with the reference sequence of Th. ovis from Turkey (GenBank: KT851432) with strong nodal support (0.99, 99%, 99%) (Figure 6).

This study provides the first molecular insights into ticks, TBPs and endosymbionts of ticks from small ruminants of the FATA, Pakistan. Findings of this study demonstrate that multiple species of the Rhipicephalus group exist that are not distinguishable based on morphological data alone. Furthermore, ticks of small ruminants from the FATA carry multiple microorganisms of a veterinary and medical health significance. This study highlights the need to explore further tick and TBPs of livestock and wildlife species in this region of the country to guide the development of control measures and extension programs for farmers.

This research received no specific grant from any funding agency, commercial or not-for-profit sectors. The visit of A.K. to the University of Melbourne was funded by the Higher Education Commission of Pakistan.

We are thankful to the livestock owners for their cooperation. Adil Khan is a thankful recipient of International Research Support Initiative Program from the Higher Education Commission of Pakistan. The authors are also thankful to Abid Ali (Abdul Wali Khan University Mardan, Pakistan) for providing lab space for sample storage.

Availability of Data and Material 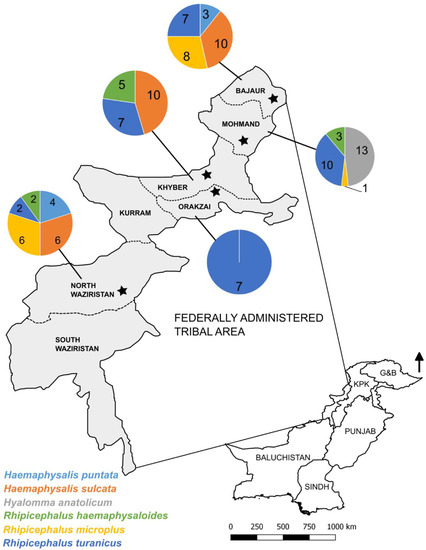 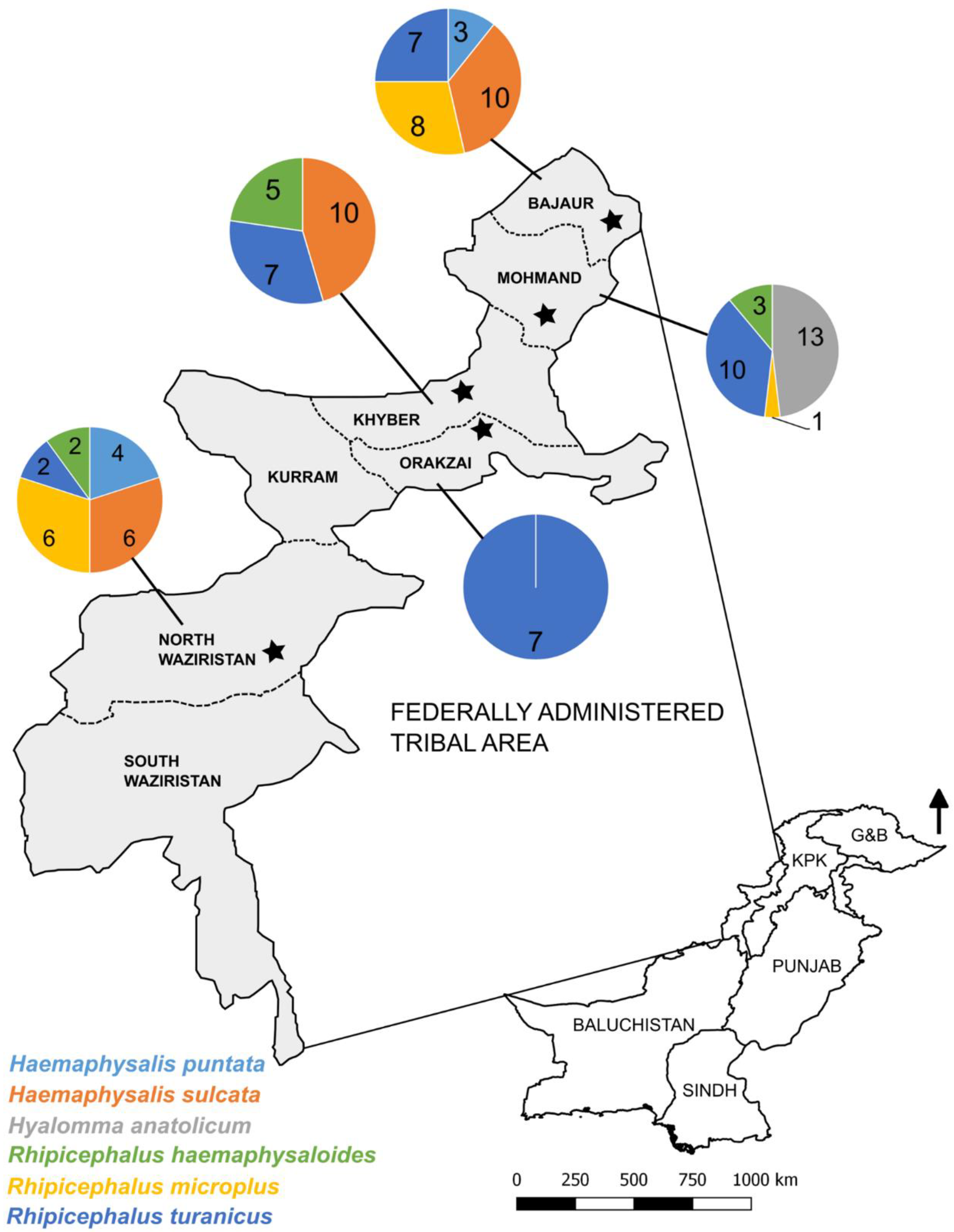 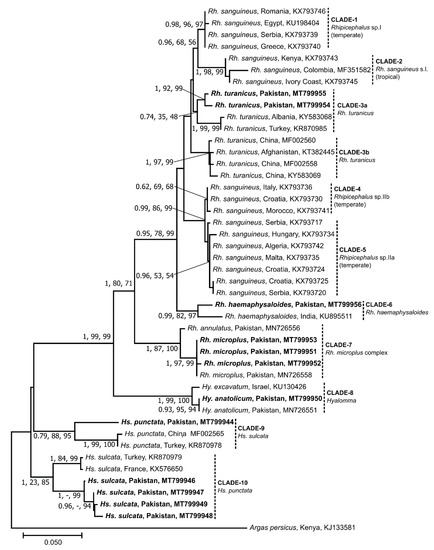 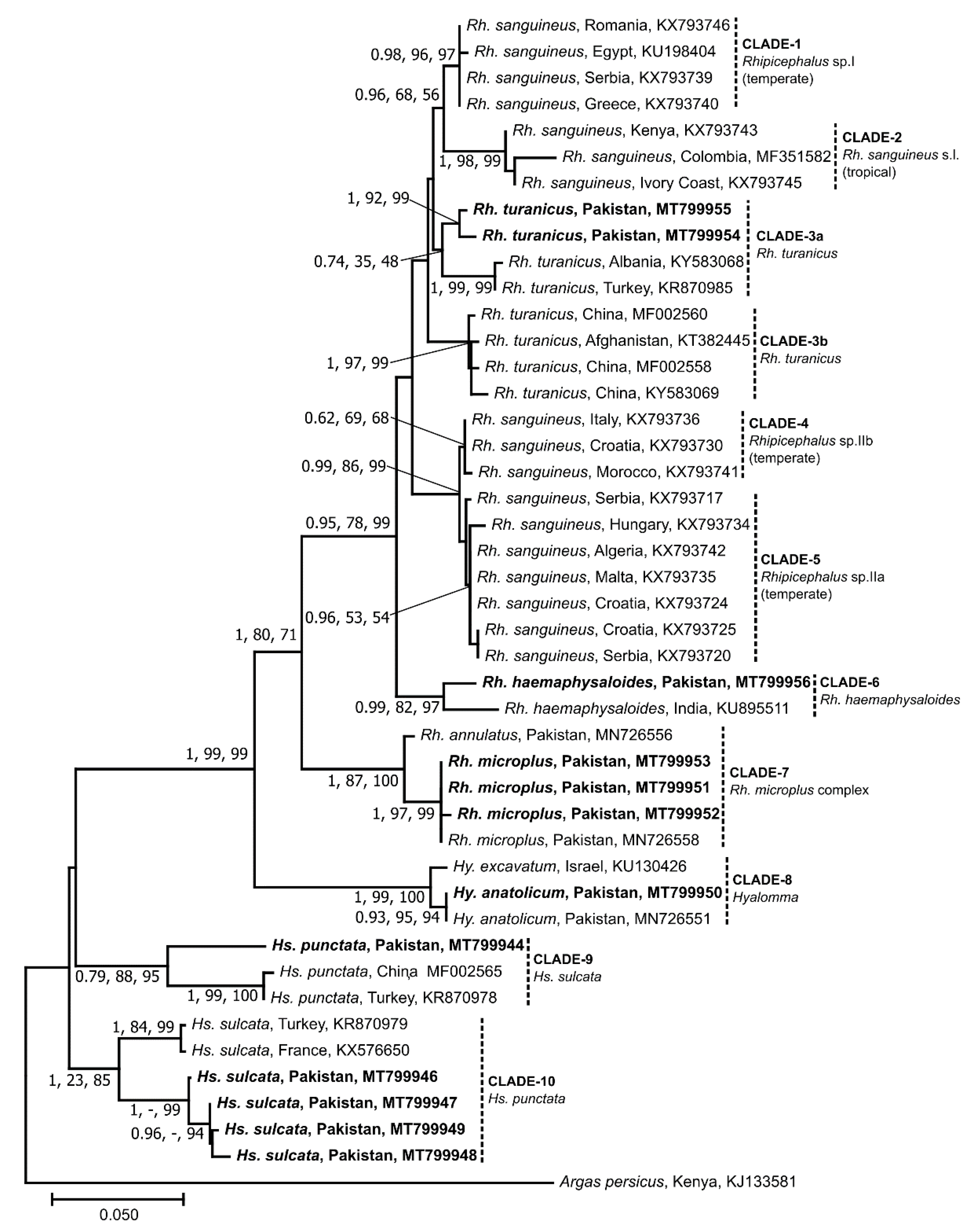 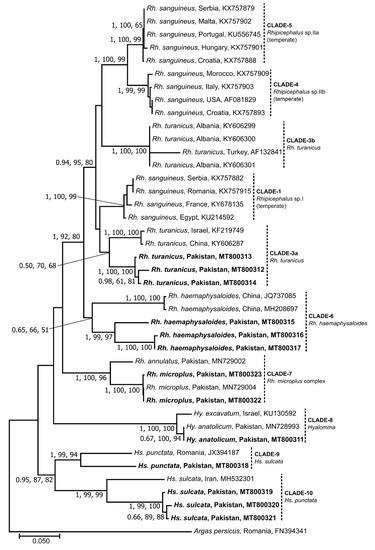 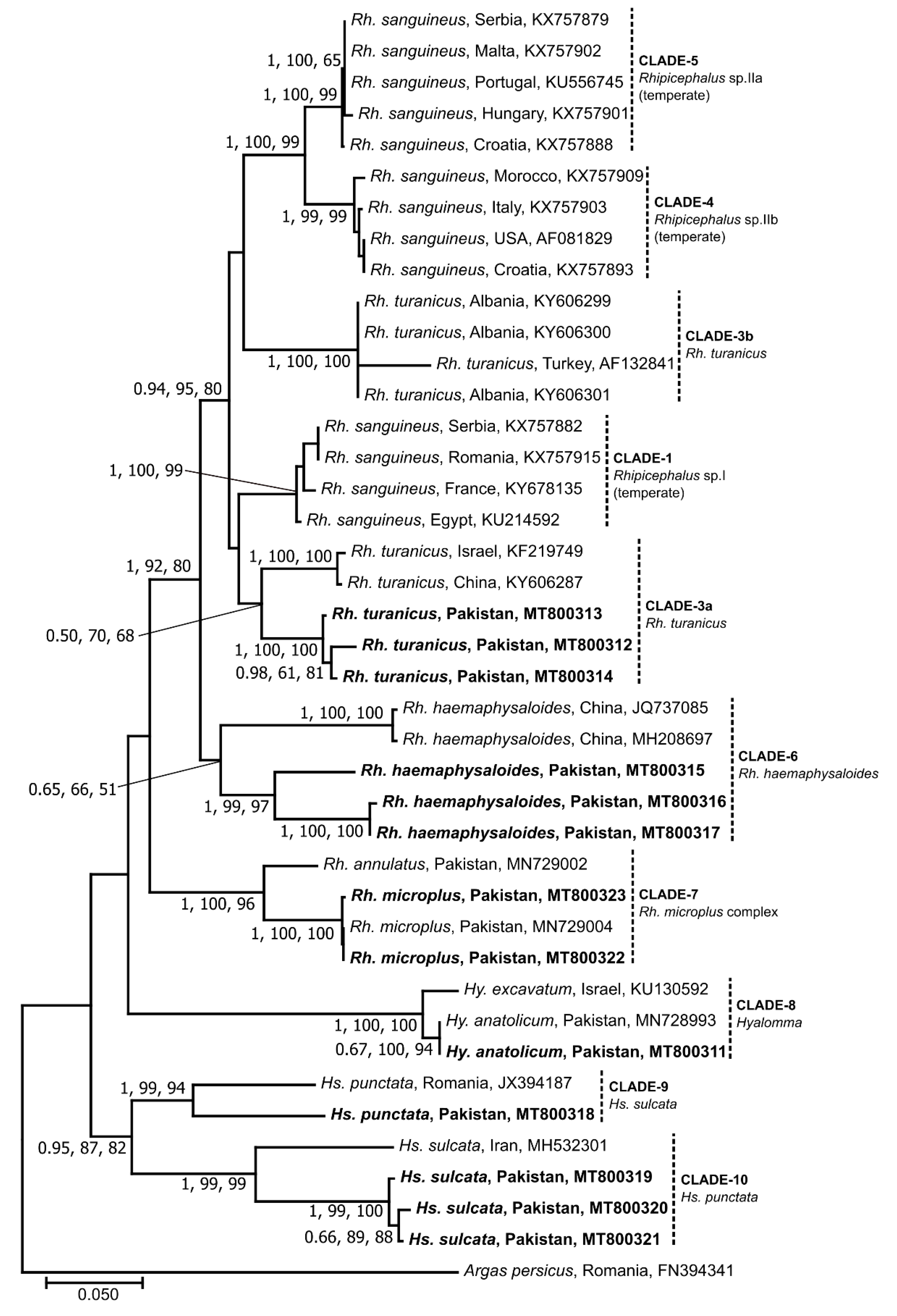 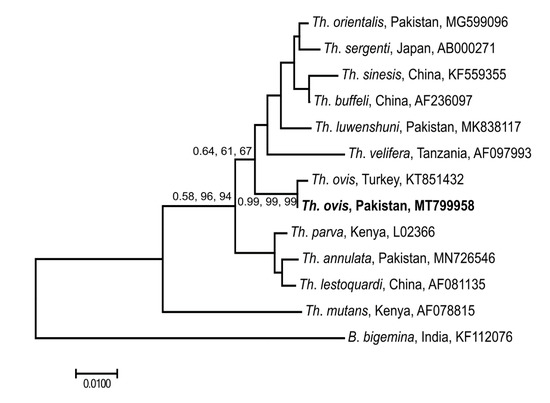 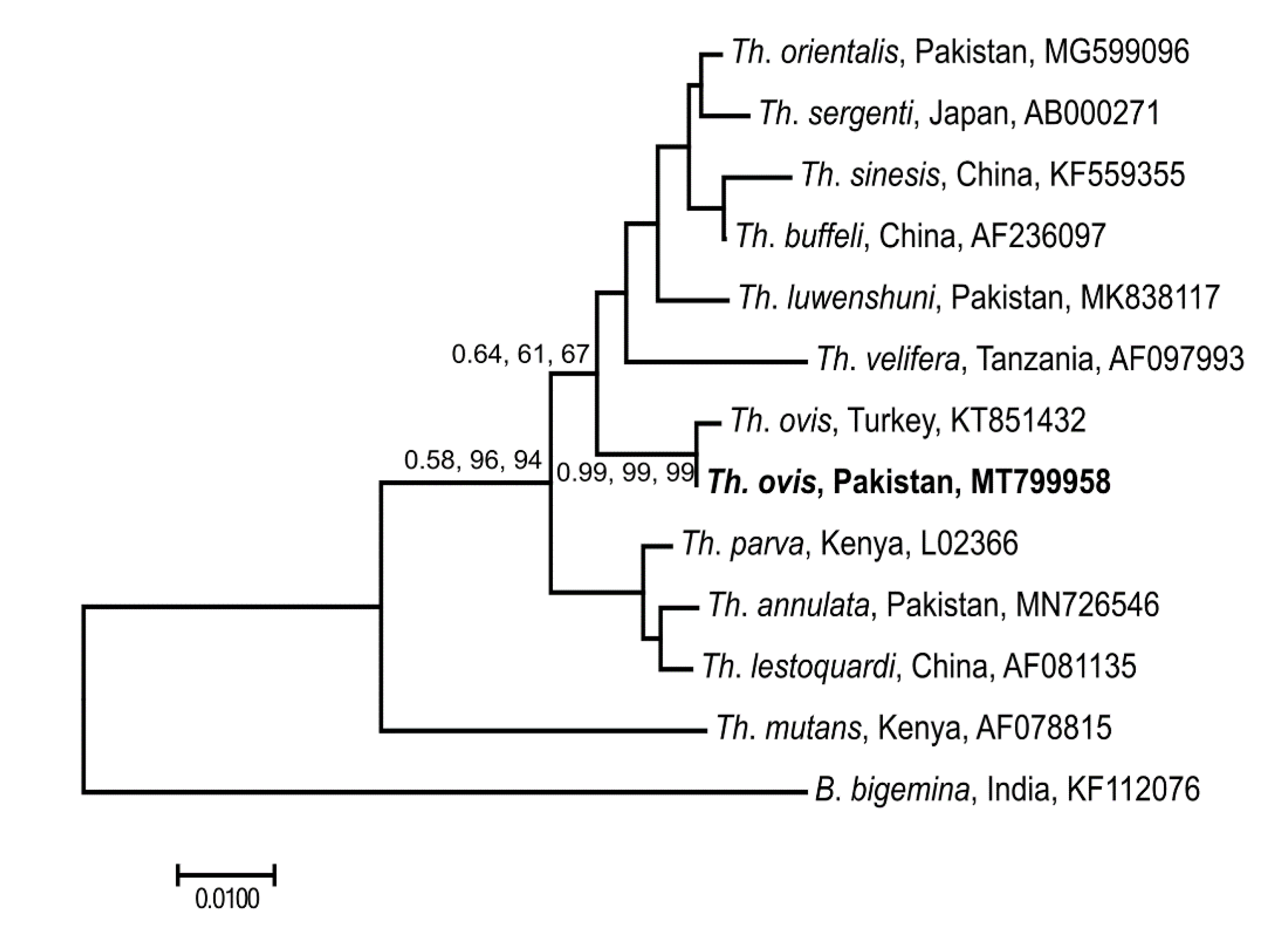