Canine cases of relapsing fever (RF) borreliosis have been described in Israel and the USA, where two RF species, Borrelia turicatae and Borrelia hermsii, can cause similar clinical signs to the Borrelia persica in dogs and cats reported from Israel, including fever, lethargy, anorexia, thrombocytopenia, and spirochetemia. In this report, we describe the first clinical cases of two dogs and a cat from Spain (Cordoba, Valencia, and Seville) caused by the RF species Borrelia hispanica. Spirochetes were present in the blood smears of all three animals, and clinical signs included lethargy, pale mucosa, anorexia, cachexia, or mild abdominal respiration. Laboratory findings, like thrombocytopenia in both dogs, may have been caused by co-infecting pathogens (i.e., Babesia vogeli, confirmed in one dog). Anemia was noticed in one of the dogs and in the cat. Borrelia hispanica was confirmed as an infecting agent by molecular analysis of the 16S rRNA locus. Molecular analysis of housekeeping genes and phylogenetic analyses, as well as successful in vitro culture of the feline isolate confirmed the causative agent as B. hispanica. View Full-Text
Keywords: Borrelia hispanica; Europe; relapsing fever; borreliosis; cat; dog Borrelia hispanica; Europe; relapsing fever; borreliosis; cat; dog
►▼ Show Figures 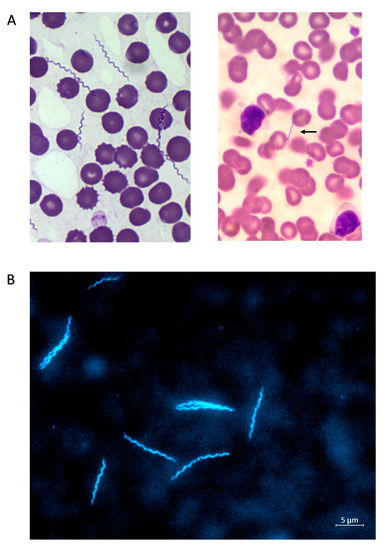