Coral Productivity Is Co-Limited by Bicarbonate and Ammonium Availability

The nitrogen environment and nitrogen status of reef-building coral endosymbionts is one of the important factors determining the optimal assimilation of phototrophic carbon and hence the growth of the holobiont. However, the impact of inorganic nutrient availability on the photosynthesis and physiological state of the coral holobiont is partly understood. This study aimed to determine if photosynthesis of the endosymbionts associated with the coral Stylophora pistillata and the overall growth of the holobiont were limited by the availability of dissolved inorganic carbon and nitrogen in seawater. For this purpose, colonies were incubated in absence or presence of 4 µM ammonium and/or 6 mM bicarbonate. Photosynthetic performances, pigments content, endosymbionts density and growth rate of the coral colonies were monitored for 3 weeks. Positive effects were observed on coral physiology with the supplementation of one or the other nutrient, but the most important changes were observed when both nutrients were provided. The increased availability of DIC and NH4+ significantly improved the photosynthetic efficiency and capacity of endosymbionts, in turn enhancing the host calcification rate. Overall, these results suggest that in hospite symbionts are co-limited by nitrogen and carbon availability for an optimal photosynthesis. View Full-Text
Keywords: carbon limitation; nitrogen limitation; photosynthesis; calcification; Symbiodiniaceae carbon limitation; nitrogen limitation; photosynthesis; calcification; Symbiodiniaceae
►▼ Show Figures 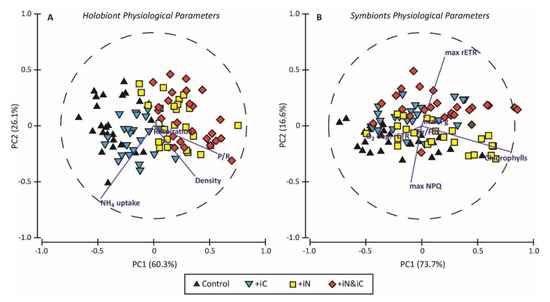