Characterization of ESBL-Producing Enterobacteria from Fruit Bats in an Unprotected Area of Makokou, Gabon

Iker A. Sevilla and

Mycobacterial infections caused by the Mycobacterium tuberculosis complex (MTC) and non-tuberculous mycobacteria (NTM) are of great medical and veterinary relevance. The aim of this research was to study whether small mammals play a role in the epidemiology of mycobacterioses. Four samplings of 100 traps were performed in each of three cattle farms with previous history of tuberculosis or NTM between 2017 and 2018. A total of 108 animals belonging to seven species were trapped, classified, and necropsied, and tissues were submitted to microbiological and molecular methods for mycobacteria identification. The wood mouse (Apodemus sylvaticus) was the most abundant species (87%). No MTC was detected but six different NTM were identified (M. intracellulare, M. avium subsp. paratuberculosis, M. gordonae, M. celatum, M. fortuitum, and a not determined Mycobacterium sp.), showing a prevalence of 6.5%. No significant association was found between mycobacteria prevalence and the analyzed factors. Although a role in the epidemiology of MTC could not be attributed to small mammals, A. sylvaticus carries NTM that could be pathogenic or interfere with the diagnosis of tuberculosis. According to our results, there is a risk of NTM transmission at the wildlife–livestock interface through potential indirect contacts between small mammals and cattle. View Full-Text
Keywords: non-tuberculous mycobacteria; small mammals; Apodemus sylvaticus non-tuberculous mycobacteria; small mammals; Apodemus sylvaticus
►▼ Show Figures 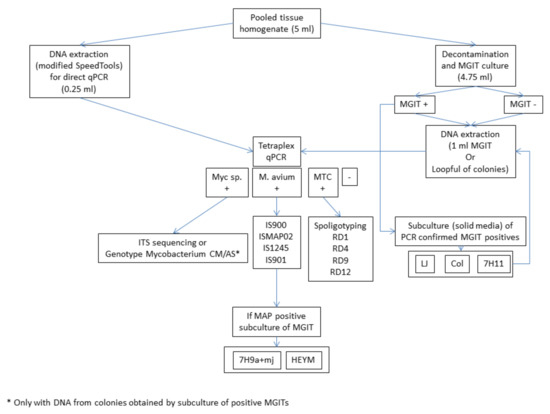