A Multi-Omic Analysis for Low Bone Mineral Density in Postmenopausal Women Suggests a Relationship between Diet, Metabolites, and Microbiota
Previous Article in Journal

:
The human gut microbiome is an important component that defines host health. Childhood is a particularly important period for the establishment and development of gut microbiota (GM). We sequenced the 16S rRNA gene from fecal samples of children between 5 and 10 years old, in two Mexican communities with contrasting lifestyles, i.e., “Westernized” (México City, n = 13) and “non-Westernized” (Me’phaa indigenous group, n = 29), in order to characterize and compare their GM. The main differences between these two communities were in bacteria associated with different types of diets (high animal protein and refined sugars vs. high fiber food, respectively). In addition, the GM of Me’phaa children showed higher total diversity and the presence of exclusive phyla, such as Deinococcus-Thermus, Chloroflexi, Elusimicrobia, Acidobacteria, and Fibrobacteres. In contrast, the children from México City showed less diversity and the presence of Saccharibacteria phylum, which was associated with the degradation of sugar compounds and was not present in the samples from Me’phaa children. This comparison provided further knowledge of the selective pressures affecting microbial ecosystemic composition over the course of human evolution and the potential consequences of pathophysiological states correlated with Westernization lifestyles.
Keywords:
intestinal microbiome; children’s microbiota; diet; Westernized; non-Westernized; lifestyle; microbial diversity; human health

The feces of children from México City (18.102″ W 19°12′36.36″ W) and two Me’phaa communities, Plan de Gatica (17°7′ 49.5552″ N 99.7′, EASL 510 m) and El Naranjo (17°9′ 54.0036″ N 98°57′, 50.9832″ W, EASL 860 m) were obtained. The distance between the two indigenous communities is almost 30 km, and the socioeconomic and cultural patterns are similar [29].
In this work, the “Westernized” population was represented by children that inhabited the south of México City and that were part of a federal pedagogical program at the National Pedagogical University (Figure 1). This population corresponded to a medium-high economic level with abundant diets characterized by high animal protein consumption, refined vegetable oils, cereal grains, and sugars (e.g., soda, biscuits, snacks, etc.), as well as low fiber and vegetables intake.

Fecal samples were obtained from children between 5 and 10 years old, in the Me’ phaa community and México City; 33 children (15 males and 18 females) and 13 children (four males and nine females) were collected, respectively. Despite the limitation of not being a vast number of samples, other authors have previously used this approximation [21]. Each participant collected a fecal sample in a sterilized plastic jar. Each jar had a unique nomenclature designated to the participant written on the lid. All fecal samples were frozen with liquid nitrogen in a posterior storage at −20 °C, until DNA extraction. Before the DNA extraction, fecal samples of approximately 100 µL were collected with a pipette tip and placed in a 1.5 milliliter sterile microtube.
In addition to fecal samples, the study included anthropometric measurements (i.e., height, weight, and BMI) from all participants (Supplementary Materials Table S2), as well as a questionnaire applied to the corresponding mothers about the children’s nutritional status and information on pregnancy, childbirth, and length of breastfeeding. For the Me’phaa community, the assistance of a translator was needed, since this community does not speak the Spanish language.

Each sample (~100 µL of fecal DNA) was extracted using the DNeasy Blood & Tissue kit (Qiagen, Valencia, CA, USA), according to the manufacturer’s instructions. DNA was resuspended within 30 µL of molecular grade water and stored at −20 °C until PCR amplification.

2.5. Analysis of the Sequence Data

The paired-end 2 × 250 reads were processed in QIIME2. The reads were denoised with the DADA2 plugin to resolve the amplicon sequence variants (ASVs) [34]. Forward and reverse reads were both truncated at 200 pb, and chimeric sequences were removed using the “consensus” method. Representative ASV sequences were taxonomically assigned using the “classify consensus-vsearch plugin” [35], using the SILVA 132 database as a reference [36]. An alignment was performed with the MAFFT algorithm [37]. After masking positional conservations and gap filtering, a phylogeny was built with the FastTree algorithm [38]. The abundance table and phylogeny were exported to the R environment to perform the statistical analysis with the phyloseq [39] and ggplot2 packages. Plastidic ASVs were filtered out of the samples, which were rarefied to a minimum sequencing effort of 21,000 reads per sample (Supplementary Materials Figure S1). A Venn diagram was plotted with the ASVs by location using the vennDiagram function of the limma library in R [40]. The total diversity (alpha diversity) of the ASVs was calculated using Faith’s phylogenetic diversity index (PD), Shannon diversity index, and observed ASV’s.

To determine whether or not alpha diversity is different between community and sex, we performed a Welch two sample t-test to evaluate Faith’s PD index and Shannon index; a Wilcoxon rank-sum test with continuity correction to evaluate observed ASVs. Comparisons were done in all possible combinations between sex (i.e., male and female) and community (indigenous and Westernized). Beta diversity analysis between sex and community was estimated by computing weighted, unweighted UniFrac and Bray–Curtis distances. Statistical differences were determined by a permutational multivariate analysis of variance using distance matrices (PERMANOVA). Additionally, we performed a differential abundance analysis with the DESeq2 library [41] to determine the main discriminant ASVs between community and sex.
We additionally explored the particular differences of the most characterized VANISH and BIoSSUM families, i.e., Prevotellaceae, Spirochaetaceae, and Succinivibrionaceae as the VANISH group, and Bacteroidaceae, Enterobacteriaceae, and Verrucomicrobiaceae as the BIoSSUM group [12]. Hence, we performed a zero inflated beta regression model (ZIBM) considering community and sex of the children as additive predictors. If abundance was 0 in ≥90% of the studied samples, a Wilcoxon rank-sum test was performed instead of ZIBM. Statistically significant comparisons in all alpha and beta diversity analyses were considered, with p < 0.05. p-values in all multiple comparisons were adjusted by the Holm’s method [42]. Comparative statistical analysis was performed in R 3.5.0 [43] implementing the following packages: vegan [44], MASS [45] and GAMLSS [46], stats [43].

All procedures for testing and recruitment were approved (25 September 2017) by the National Autonomous University of México Committee on Research Ethics (FPSI/CE/01/2016) and run in accordance with the ethical principles and guidelines of the Official Mexican Law (NOM-012-SSA3-2012). All participants read and signed a written informed consent. Additionally, we received signed approval from all participants (or their parents) who were photographed for the manuscript.

3.3. The Contrasting Relationship between VANISH and BloSSUM Groups between Indigenous and City Children

According to Sonnenburg and Sonnenbgurg (2019), there are differences in the abundance of VANISH taxa (volatile or associated negatively with industrialized societies of humans) and those positively associated with societies of urbanization/modernization (BIoSSUM). For this manuscript, we considered community and sex of the children to be predictors of the following families: Bacteroidaceae, Enterobacteriaceae, Verrucomicrobiaceae, Prevotellaceae, Spirochaetaceae, and Succinivibrionaceae (Figure 5) [12].
Children’s GM from México City exhibit a greater abundance in two of three BIoSSUM groups, i.e., Bacteroidaceae (t = −4.78, p < 0.01) and Verrucomicrobiaceae (t = −2.81, p < 0.01) as compared with the Me’phaa community (Figure 5D,E). This was independent of the sex of the children (t = −0.32 and p = 0.71). Although the Enterobacteriaceae family was more abundant in the Me’phaa community (0.03 vs. 0.01), the difference was not statistically significant (t = 1.86, p = 0.07, Figure 5F). In contrast, the VANISH groups Prevotellaceae (t = 2.97, p < 0.01), Spirocheataecae (W = 81, p < 0.01), and Succinivibrio (W = 104, p < 0.01) were more abundant in children from the Me’phaa community than in children from México City (Figure 5A–C).

The following are available online at https://www.mdpi.com/2076-2607/8/10/1592/s1, Figure S1. Accumulation curve of 16S amplicon libraries from each individual in the study. México City and Me’phaa children are represented in pink and blue respectively. Phylotypes were based on ASV sequence identity. Figure S2. Distribution of bacterial composition (16S rDNA V4) at family level of male and female children from México City and the Me’phaa community, families with relative abundances <1% were agglomerated in the “Others” category. Figure S3. Weighted Unifrac Analysis. The GM of two communities represented in this study (City = México City (blue); indigenous = Me´phaa (green)). Sex is showed with a circle for males and a triangle for females (PERMANOVA: F = 2.79; p = 0.08). Table S1. Relative abundances of the most abundant phyla found in fecal samples from children in México City and the Me’phaa communities. Table S2. Table containing anthropometric data, including height, weight and BMI from children of both groups [79].

I.G.-S., conceived and designed this study; A.S.-Q. and I.G.-S., wrote the first draft of the manuscript; I.G.-S., S.M.-C., and J.N. collected biological samples; A.S.-Q.; L.I.F.; S.M.-C., and O.G. performed DNA extraction, amplification, and sequencing; D.C.-G. and I.G.-S. analyzed all data. All authors contributed to the writing and editing of the final version. All authors have read and agreed to the published version of the manuscript.

We are grateful to Margarita Muciño, Julio Naranjo, and Diego Hernández-Muciño from Xuajin Me’Phaa, a non-governmental association, for their help in the liaison with the Me’phaa community, and their help with sample collection and logistics. We also are grateful to Olga A. Rojas-Ramos, Ariatna Hernández Castillo, and Rosa M. de la Fuente Rodríguez for their contributions in sample collection and Mariana Martinez for her contribution in DNA amplification. 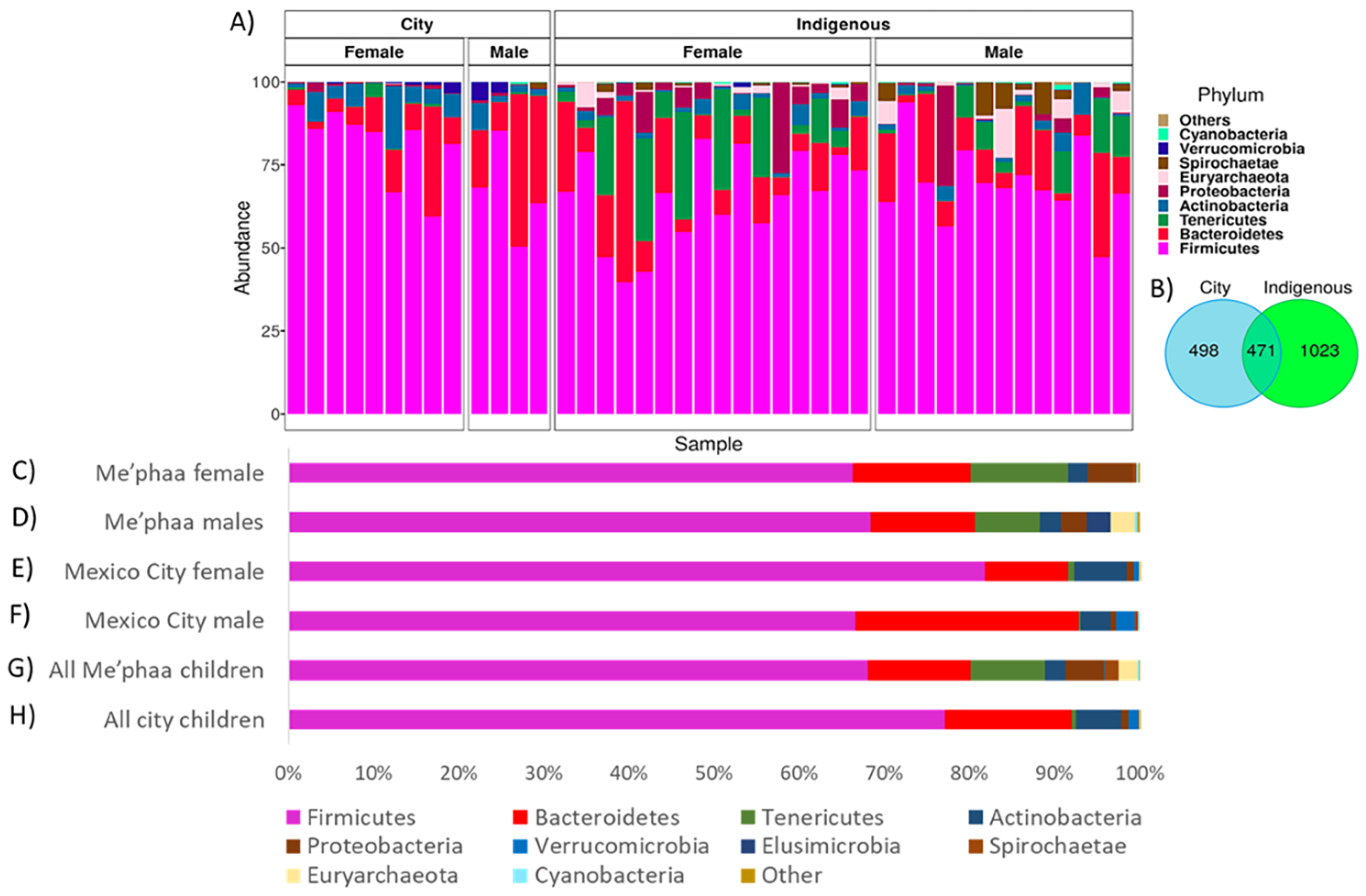 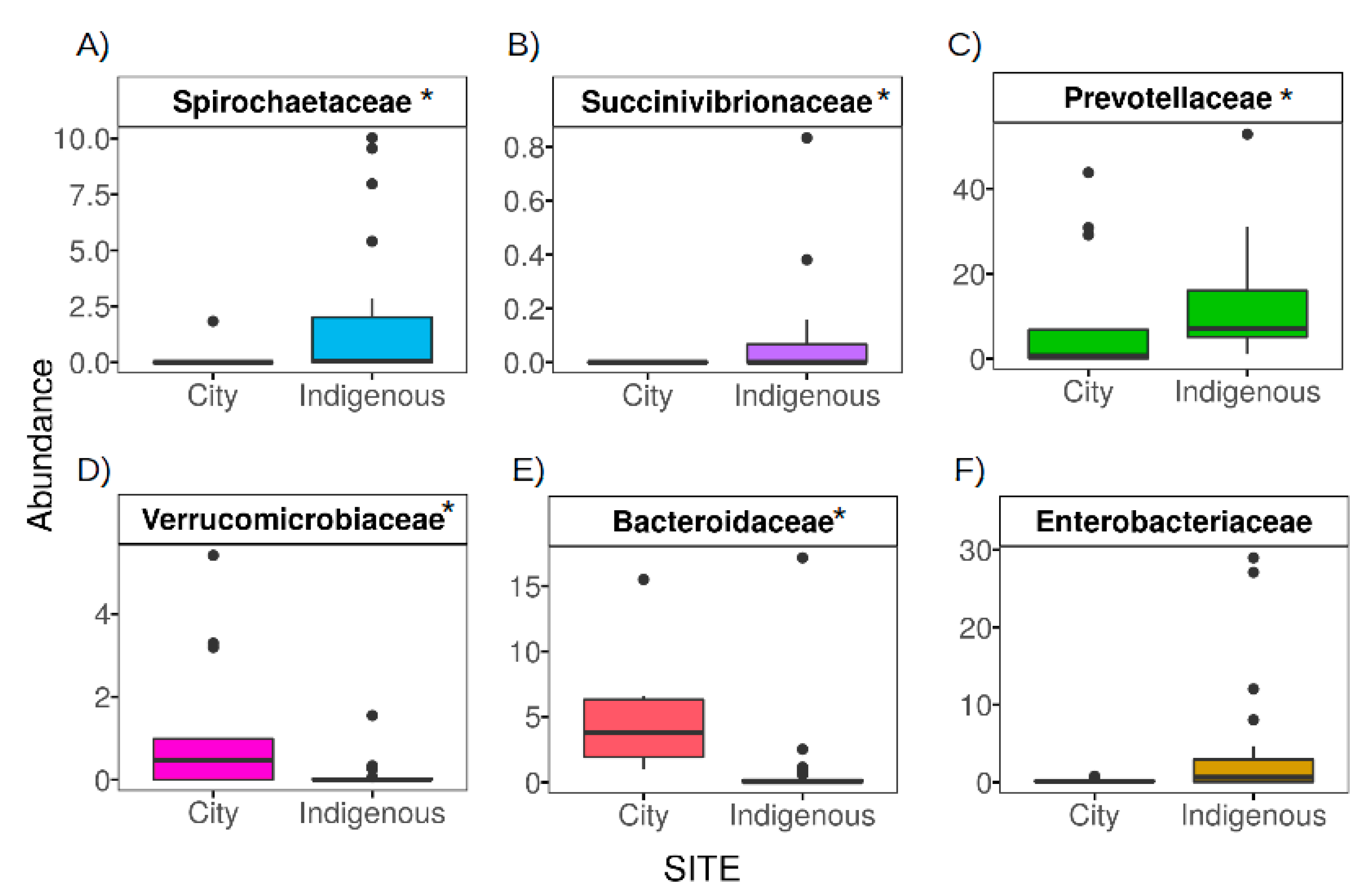