The volatile secondary metabolite, isoprene, is released by trees to the atmosphere in enormous quantities, where it has important effects on air quality and climate. Oil palm trees, one of the highest isoprene emitters, are increasingly dominating agroforestry over large areas of Asia, with associated uncertainties over their effects on climate. Microbes capable of using isoprene as a source of carbon for growth have been identified in soils and in the tree phyllosphere, and most are members of the Actinobacteria. Here, we used DNA stable isotope probing to identify the isoprene-degrading bacteria associated with oil palm leaves and inhabiting the surrounding soil. Among the most abundant isoprene degraders of the leaf-associated community were members of the Sphingomonadales, although no representatives of this order were previously known to degrade isoprene. Informed by these data, we obtained representatives of the most abundant isoprene degraders in enrichments, including Sphingopyxis strain OPL5 (Sphingomonadales), able to grow on isoprene as the sole source of carbon and energy. Sequencing of the genome of strain OPL5, as well as a novel Gordonia strain, confirmed their pathways of isoprene degradation and broadened our knowledge of the genetic and taxonomic diversity of this important bacterial trait. View Full-Text
Keywords: isoprene degradation; targeted isolation; DNA-SIP; isoA; isoprene monooxygenase; Sphingopyxis isoprene degradation; targeted isolation; DNA-SIP; isoA; isoprene monooxygenase; Sphingopyxis
►▼ Show Figures 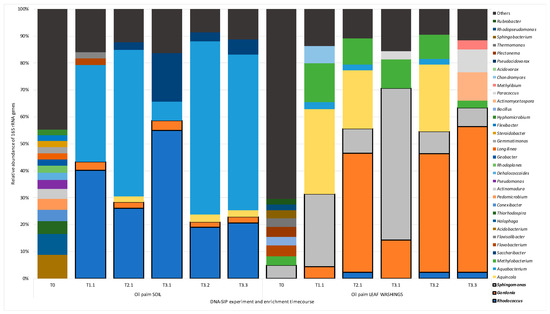