Can Gut Microbiota and Lifestyle Help Us in the Handling of Anorexia Nervosa Patients?
Previous Article in Journal

Do Antimicrobial Proteins Contribute to Overcoming the Hidden Antifungal Crisis at the Dawn of a Post-Antibiotic Era?
Previous Article in Special Issue

Socioeconomic Status and the Gut Microbiome: A TwinsUK Cohort Study

Socioeconomic inequalities in health and mortality are well established, but the biological mechanisms underlying these associations are less understood. In parallel, the gut microbiome is emerging as a potentially important determinant of human health, but little is known about its broader environmental and social determinants. We test the association between gut microbiota composition and individual- and area-level socioeconomic factors in a well-characterized twin cohort. In this study, 1672 healthy volunteers from twin registry TwinsUK had data available for at least one socioeconomic measure, existing fecal 16S rRNA microbiota data, and all considered co-variables. Associations with socioeconomic status (SES) were robust to adjustment for known health correlates of the microbiome; conversely, these health-microbiome associations partially attenuated with adjustment for SES. Twins discordant for IMD (Index of Multiple Deprivation) were shown to significantly differ by measures of compositional dissimilarity, with suggestion the greater the difference in twin pair IMD, the greater the dissimilarity of their microbiota. Future research should explore how SES might influence the composition of the gut microbiota and its potential role as a mediator of differences associated with SES. View Full-Text
Keywords: microbiome; microbiota; sociobiome; socioeconomic status; SES microbiome; microbiota; sociobiome; socioeconomic status; SES
►▼ Show Figures 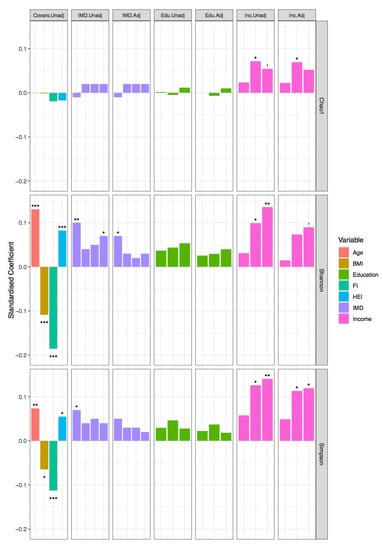