The first line therapy for Lyme disease is treatment with doxycycline, amoxicillin, or cefuroxime. In endemic regions, the persistence of symptoms in many patients after completion of antibiotic treatment remains a major healthcare concern. The causative agent of Lyme disease is a spirochete, Borrelia burgdorferi, an extreme auxotroph that cannot exist under free-living conditions and depends upon the tick vector and mammalian hosts to fulfill its nutritional needs. Despite lacking all major biosynthetic pathways, B. burgdorferi uniquely possesses three homologous and functional methylthioadenosine/S-adenosylhomocysteine nucleosidases (MTANs: Bgp, MtnN, and Pfs) involved in methionine and purine salvage, underscoring the critical role these enzymes play in the life cycle of the spirochete. At least one MTAN, Bgp, is exceptional in its presence on the surface of Lyme spirochetes and its dual functionality in nutrient salvage and glycosaminoglycan binding involved in host-cell adherence. Thus, MTANs offer highly promising targets for discovery of new antimicrobials. Here we report on our studies to evaluate five nucleoside analogs for MTAN inhibitory activity, and cytotoxic or cytostatic effects on a bioluminescently engineered strain of B. burgdorferi. All five compounds were either alternate substrates and/or inhibitors of MTAN activity, and reduced B. burgdorferi growth. Two inhibitors: 5′-deoxy-5′-iodoadenosine (IADO) and 5′-deoxy-5′-ethyl-immucillin A (dEt-ImmA) showed bactericidal activity. Thus, these inhibitors exhibit high promise and form the foundation for development of novel and effective antimicrobials to treat Lyme disease. View Full-Text
Keywords: methylthioadenosine/S-adenosylhomocysteine nucleosidase; Borrelia burgdorferi; antimicrobials; Bgp; Pfs; MTAN methylthioadenosine/S-adenosylhomocysteine nucleosidase; Borrelia burgdorferi; antimicrobials; Bgp; Pfs; MTAN
►▼ Show Figures 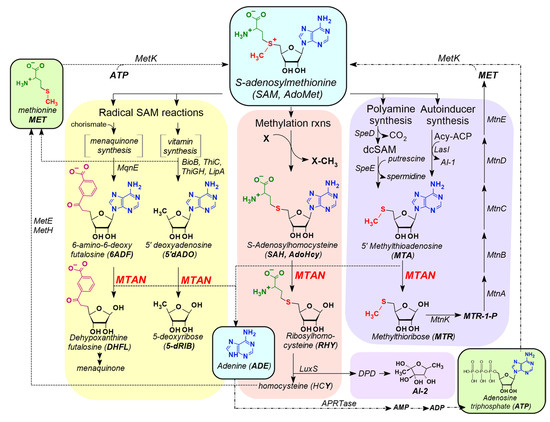