New Genotypes of Coxiella burnetii Circulating in Brazil and Argentina

The main reservoir of Coxiella (C.) burnetii are ruminants. They shed the pathogen through birth products, vaginal mucus, faeces and milk. A direct comparison of C. burnetii excretions between naturally infected sheep and goats was performed on the same farm to investigate species-specific differences. The animals were vaccinated with an inactivated C. burnetii phase I vaccine at the beginning of the study period for public health reasons. Vaginal and rectal swabs along with milk specimens were taken monthly during the lambing period and once again at the next lambing season. To estimate the environmental contamination of the animals’ housings, nasal swabs from every animal were taken simultaneously. Moreover, dust samples from the windowsills and straw beddings were collected. All samples were examined by qPCR targeting the IS1111 gene and the MLVA/VNTR typing method was performed. Whole genome sequencing was applied to determine the number of IS1111 copies followed by a calculation of C. burnetii genome equivalents of each sample. The cattle-associated genotype C7 was detected containing 29 IS1111 copies. Overall, goats seem to shed more C. burnetii through vaginal mucus and in particular shed more and for longer via the rectal route than sheep. This is supported by the larger quantities of C. burnetii DNA detected in caprine nasal swabs and environmental samples compared to the ovine ones. Transmission of C. burnetii from cattle to small ruminants must also be considered. View Full-Text
Keywords: Coxiella burnetii; sheep; goat; cattle; environmental contamination; nasal swabs; whole genome sequencing; MLVA/VNTR; Q fever; zoonosis Coxiella burnetii; sheep; goat; cattle; environmental contamination; nasal swabs; whole genome sequencing; MLVA/VNTR; Q fever; zoonosis
►▼ Show Figures 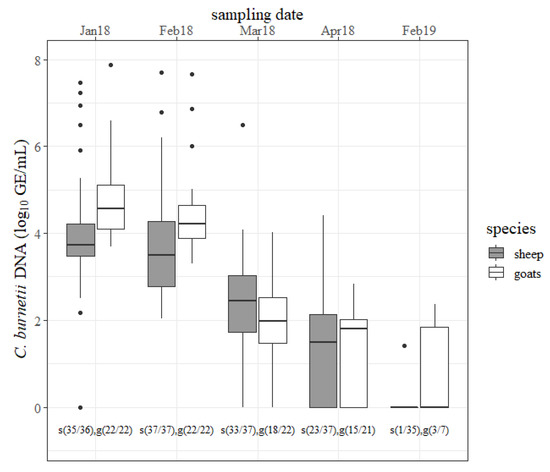