More than 180 mammalian species have been found naturally infected with Trypanosoma cruzi. Many of them play an important role in the maintenance of this parasite. In particular, new studies have appeared which indicate that some species of Procyonidae family may play a role as T. cruzi hosts, however, more data are needed to evaluate their long-term physiological response to parasite infection, especially for specific antibodies. In this study, antibodies to T. cruzi were detected and prevalence and epitope recognition were assessed by ELISA (using discrete typing unit (DTU) I as antigen) and WB (using DTU I and DTU II as antigens) and sera from two procyonid species obtained through five-year follow-up of two semicaptive populations living in the same habitat. Marked heterogeneity in antigens recognition between species and differences in seroprevalence (p = 0.0002) between white-nosed coatis (Nasua narica), 51.8% (115/222), and common raccoons (Procyon lotor), 28.3% (23/81), were found. Antigens with high molecular weight when DTU-I was used were the most recognized, while a greater antigen diversity recognition was observed with DTU-II; for white-nosed coatis, low-molecular-weight antigens were mainly recognized, while for common raccoons proteins with molecular weights greater than 80 kDa were recognized most. These divergent humoral immune responses could be related to an alleged pattern of recognition receptors and major histocompatibility complex molecules difference in the procyonids species. View Full-Text
Keywords: antibodies; ELISA and western blot; epitope recognition; Nasua narica; Procyon lotor; Procyonidae; Trypanosoma cruzi antibodies; ELISA and western blot; epitope recognition; Nasua narica; Procyon lotor; Procyonidae; Trypanosoma cruzi
►▼ Show Figures 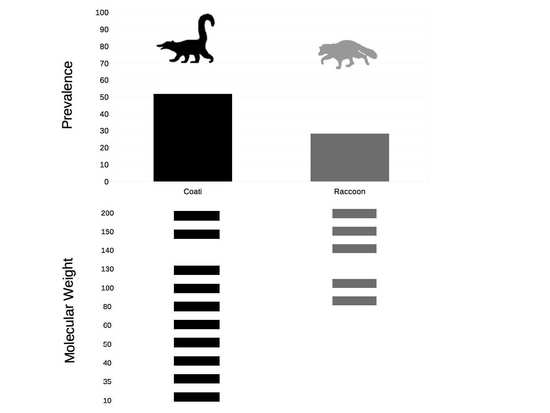