Can Ciprofloxacin be Used for Precision Treatment of Gonorrhea in Public STD Clinics? Assessment of Ciprofloxacin Susceptibility and an Opportunity for Point-of-Care Testing

We surveyed infection by Trypanosoma spp. and Leishmania spp. in small wild mammals from Cumari, Goiás State aiming to investigate the diversity of trypanosomatid in a modified landscape of the Brazilian Cerrado (and possible infection overlapping with canids from the same area). Blood, skin, spleen, and liver samples were collected for parasitological, serological, and molecular assays. Gracilinanus agilis was the most abundant species (N = 70; 48.6%) and it was the only one with patent parasitemia. Characterization by mini-exon and 18SrDNA targets were achieved in 7/10 hemocultures with positive fresh blood examination, which confirmed the T. cruzi infection by Discrete Typing Units (DTU) TcI in single (N = 2) and mixed infections with other DTUs (N = 5). T. rangeli and T. dionisii were detected in skin fragments from Didelphis albiventris and Oecomys cleberi, respectively. G. agilis were found to be infected by L. braziliensis and L. guyanensis, while Leishmania sp. DNA was detected in the liver of Oligoryzomys nigripes and Calomys expulsus. Subpatent infection by T. cruzi and Leishmania sp. was serologically detected in 15% and 9% of the small mammal fauna, respectively. Small mammals from Cumari are included in T. cruzi and Leshmania spp. transmission cycles, showing a higher diversity of trypanosomatid species and/or genotypes than that observed in canids of the same agroecosystem. View Full-Text
Keywords: agroecosystems; Brazilian Cerrado; marsupials; rodents; canids; neotropical mammals; Leishmania sp.; Trypanosoma cruzi agroecosystems; Brazilian Cerrado; marsupials; rodents; canids; neotropical mammals; Leishmania sp.; Trypanosoma cruzi
►▼ Show Figures 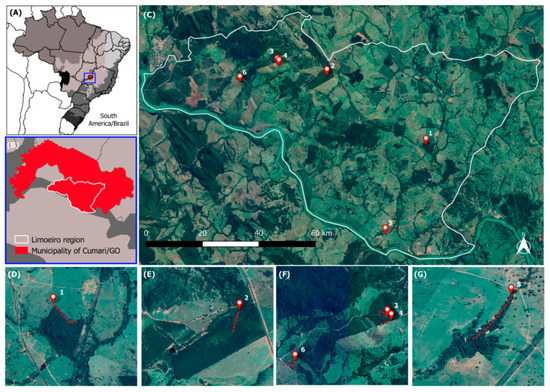