Four large cryptic plasmids were identified in the salmon pathogen Piscirickettsia salmonis reference strain LF-89. These plasmids appeared highly novel, with less than 7% nucleotidic identity to the nr plasmid database. Plasmid copy number analysis revealed that they are harbored in chromosome equivalent ratios. In addition to plasmid-related genes (plasmidial autonomous replication, partitioning, maintenance, and mobilization genes), mobile genetic elements such as transposases, integrases, and prophage sequences were also identified in P. salmonis plasmids. However, bacterial lysis was not observed upon the induction of prophages. A total of twelve putative virulence factors (VFs) were identified, in addition to two global transcriptional regulators, the widely conserved CsrA protein and the regulator Crp/Fnr. Eleven of the putative VFs were overexpressed during infection in two salmon-derived cellular infection models, supporting their role as VFs. The ubiquity of these plasmids was also confirmed by sequence similarity in the genomes of other P. salmonis strains. The ontology of P. salmonis plasmids suggests a role in bacterial fitness and adaptation to the environment as they encode proteins related to mobilization, nutrient transport and utilization, and bacterial virulence. Further functional characterization of P. salmonis plasmids may improve our knowledge regarding virulence and mobile elements in this intracellular pathogen. View Full-Text
Keywords: fish pathogen; Piscirickettsia salmonis; plasmids; MGE; virulence factors; prophages; gene annotation fish pathogen; Piscirickettsia salmonis; plasmids; MGE; virulence factors; prophages; gene annotation
►▼ Show Figures 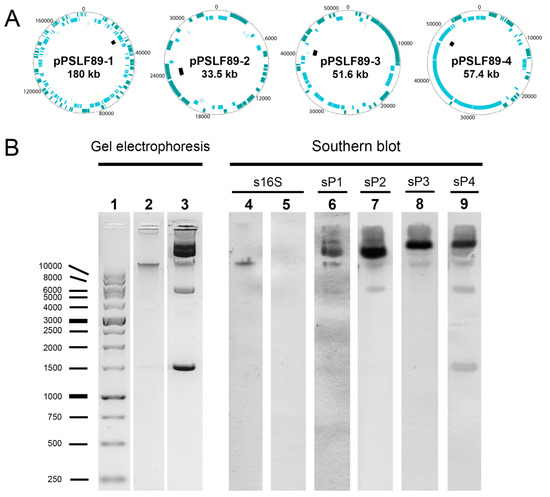