Bacterial meningitis is currently recognized as one of the most important life-threatening infections of the central nervous system (CNS) with high morbidity and mortality, despite the advancements in antimicrobial treatment. The disruption of blood–brain barrier (BBB) induced by meningitis bacteria is crucial for the development of bacterial meningitis. However, the complete mechanisms involving in the BBB disruption remain to be elucidated. Here, we found meningitic Escherichia coli induction of angiopoietin-like 4 (ANGPTL4) in brain microvascular endothelial cells (BMECs) contributes to BBB disruption via ARHGAP5/RhoA/MYL5 signaling cascade, by the demonstration that ANGPTL4 was significantly upregulated in meningitis E. coli infection of BMECs as well as mice, and treatment of the recombinant ANGPTL4 protein led to an increased permeability of the BBB in vitro and in vivo. Moreover, we found that ANGPTL4 did not affect the expression of tight junction proteins involved in BBB disruption, but it increased the expression of MYL5, which was found to have a negative role on the regulation of barrier function during meningitic E. coli infection, through the activation of RhoA signaling pathway. To our knowledge, this is the first report demonstrating the disruption of BBB induced by ANGPTL4 through the ARHGAP5/RhoA/MYL5 pathway, which largely supports the involvement of ANGPTL4 during meningitic E. coli invasion and further expands the theoretical basis for the mechanism of bacterial meningitis. View Full-Text
Keywords: bacterial meningitis; BBB disruption; ANGPTL4; ARHGAP5; RhoA; MYL5 bacterial meningitis; BBB disruption; ANGPTL4; ARHGAP5; RhoA; MYL5
►▼ Show Figures 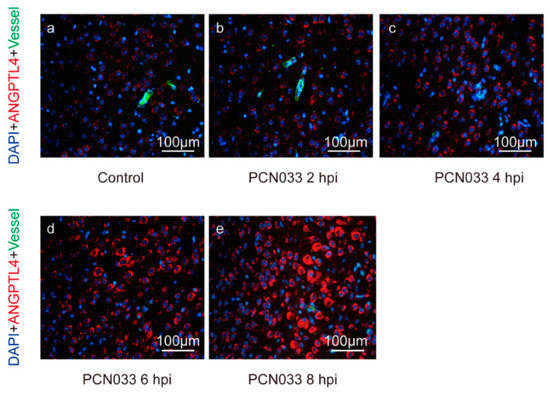