Analysis of Resistance of Ebola Virus Glycoprotein-Driven Entry Against MDL28170, An Inhibitor of Cysteine Cathepsins
Previous Article in Journal

Houseflies (Musca domestica) are well-known mechanical vectors for spreading multidrug-resistant bacteria. Fish sold in open markets are exposed to houseflies. The present study investigated the prevalence and antibiotypes of multidrug-resistant (MDR) Salmonella spp. in houseflies captured from a fish market. Direct interviews with fish vendors and consumers were also performed to draw their perceptions about the role of flies in spreading antibiotic-resistant bacteria. A total of 60 houseflies were captured from a local fish market in Bangladesh. The presence of Salmonella spp. was confirmed using PCR method. Antibiogram was determined by the disk diffusion method, followed by the detection of tetA, tetB, and qnrA resistance genes by PCR. From the interview, it was found that most of the consumers and vendors were not aware of antibiotic resistance, but reported that flies can carry pathogens. Salmonella spp. were identified from the surface of 34 (56.7%) houseflies, of which 31 (91.2%) were found to be MDR. This study revealed 25 antibiotypes among the isolated Salmonella spp. All tested isolates were found to be resistant to tetracycline. tetA and tetB were detected in 100% and 47.1% of the isolates, respectively. Among the 10 isolates phenotypically found resistant to ciprofloxacin, six (60%) were found to be positive for qnrA gene. As far as we know, this is the first study from Bangladesh to report and describe the molecular detection of multidrug-resistant Salmonella spp. in houseflies in a fish market facility. The occurrence of a high level of MDR Salmonella in houseflies in the fish market is of great public health concerns. View Full-Text
Keywords: Salmonella; foodborne pathogen; salmonellosis; fish market; vectors; housefly; multidrug; resistance; ciprofloxacin; antibiotype; public health; Bangladesh Salmonella; foodborne pathogen; salmonellosis; fish market; vectors; housefly; multidrug; resistance; ciprofloxacin; antibiotype; public health; Bangladesh
►▼ Show Figures 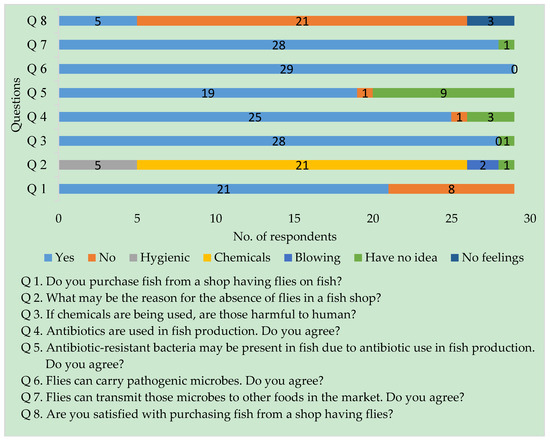