Acute Mastoiditis Associated with Pseudomonas Aeruginosa in the Pediatric Population of the Umbria Region, Italy
Previous Article in Journal

Wet bubble disease, caused by Mycogone perniciosa, is a major threat to Agaricus bisporus production in China. In order to understand the variability in genetic, pathogenicity, morphology, and symptom production of the fungus, 18 isolates of the pathogen were collected from diseased A. bisporus in different provinces in China. The isolates were characterized by a combination of morphological, cultural, molecular, and pathogenicity testing on different strains of A. bisporus and amplified fragment length polymorphism (AFLP) analysis. The 18 isolates were identified by Koch’s postulate and confirmed different pathogenic variability among them. The yellow to brown isolates were more virulent than the white isolates. AFLP markers clustered the isolates into two distinct groups based on their colony color, with a high level of polymorphism of Jaccard similarities range from 0.39% to 0.64%. However, there was no evidence of an association between the genetic diversity and the geographical origin of the isolates. Through knowledge of the genetic diversity, phenotypic virulence of M. perniciosa is a key factor for successful breeding of resistant strains of A. bisporus and developing of an integrated disease management strategy to manage wet bubble disease of A. bisporus. View Full-Text
Keywords: AFLP; Mycogone perniciosa; wet bubble disease; pathogenicity; diversity AFLP; Mycogone perniciosa; wet bubble disease; pathogenicity; diversity
►▼ Show Figures 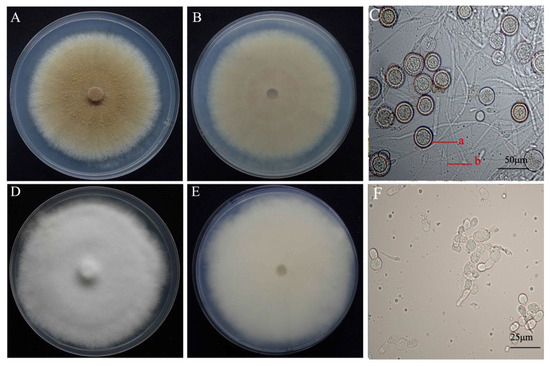