Fungal-Bacterial Interactions in Health and Disease

Empowering Women: Moving from Awareness to Action at the Immunology of Fungal Infections Gordon Research Conference

Despite the high prevalence of women in graduate degree programs and equal or more women earning PhDs, MDs, and MD/PhDs, and despite efforts at individual and institutional levels to promote women in STEM fields, there remains a disparity in pay and academic advancement of women. Likewise, there is a paucity of women in top scientific and academic leadership positions. The causes of this gender disparity are complex and multi-factorial and to date no “magic bullet” approach has been successful in changing the landscape for women in academic and scientific fields. In this report we detail our experiences with a novel mechanism for promoting discussion and raising awareness of the challenges of gender disparity in the sciences. The Gordon Research Conferences (GRC) launched the Power Hour at its meetings in 2016: a dedicated, scheduled session held during the scientific meeting to facilitate discussion of challenges specific to women in science. Here we share our experience with hosting the second Power Hour at the 2019 GRC Immunology of Fungal Infections (IFI) meeting held in Galveston, TX. We will discuss the overall structure, key discussion points, and feedback from participants with the aim of supporting future efforts to empower women and underrepresented minority groups in science.
Keywords: gender disparity; unconscious bias; women in science; women in medicine gender disparity; unconscious bias; women in science; women in medicine

2. Steps the GRC has Taken to Raise the Profile of Gender Issues

Halpern et al.’s landmark meta-analysis demonstrated in 2007 that differences in STEM achievement are linked to culture and environment, and Acton et al. found that the support of mentors correlates with a more optimistic view of the future, particularly among women [14,27].
Recognizing the need to take concrete steps to raise the profile of women in science, the Gordon Research Conference (GRC) launched the Power Hour at its meetings in 2016 [28]. The aim of this program is to create a forum for attendees to discuss challenges specific to women in science and to support their professional development through discussion and mentoring.
In 2017, the GRC held 108 Power Hours across their conferences, including at the Immunology of Fungal Infections (IFI) meeting. At the 2017 IFI Power Hour, there were approximately 50 attendees (~25% of the total attendees) with 75% women and 80% graduate students and post docs (personal communication, GRC Administrator). In 2019, the 2nd IFI Power Hour, which we led and organized, drew 46 participants, majority female (83%), spanning all career stages from graduate student to full professor. Here we share our experience with this event, including overall structure, key discussion points, and feedback from participants on impact and potential for improvement, with the aim of supporting future efforts to empower women and underrepresented minority groups in science.

3. Gender Representation at the IFI over Time

The IFI is a relatively new GRC meeting, first launched in 2011 to bring together disparate groups of researchers in fungal immunology and fungal pathogenesis. The goal of the meeting is to facilitate cross-disciplinary collaboration to drive basic research and the development of new antifungal therapies. Meeting attendees are encouraged to build networks that extend beyond the traditional boundaries of their disciplines. The structure of the meeting supports this by providing designated discussion time following each talk, substantial unstructured time during the day to enable collaboration, and a robust poster session preceded by flash talks from selected poster presenters. Since 2011, there have been a total of five meetings, each comprised of nine sessions with two to eight speakers per session, plus poster flash talks [29].
The 2019 meeting was organized by Chairs Sarah Gaffen and Neil Gow and Vice Chairs Ilse Jacobsen and Jatin Vyas, representing an even gender representation. The meeting attracted 195 participants from 10 countries and a range of career stages (Figure 1). The majority came from academic institutions, but industrial and government scientists also attended. The gender breakdown of the meeting was 48% female with 42% of the overall speakers and 44% of the discussion leaders being female, reflecting the composition of attendees and enabling overall visibility of women at the meeting (Figure 2 and Figure 3). This was achieved by Chairs and Vice-Chairs working to select speakers for the various sessions based on expertise and relevance while also committing to maintaining balance in gender, career stage, and geography, among other factors. Adherence to this approach was reinforced by policies from funders supporting the meeting, specifically NIH/NIAID. A decision was also made not to repeat any speakers from the 2017 meeting to encourage a diversity of perspective.
A large-scale analysis of gender breakdown at meetings held by the American Society for Microbiology from 2011 to 2013 revealed significant inequality in speaker selection, leading to calls to improve gender balance in selected and invited speakers and better representation of the overall make-up of the research community [19]. By presenting data on the lack of gender parity at previous meetings and by encouraging the inclusion of women in organizing roles in their meetings in 2014 and 2015, the ASM achieved gender parity between attendees and speakers within two years [17].
Whereas at the ASM meetings, the gender of conveners was perceived to correlate strongly with gender parity, for the GRC IFI there appears to be limited correlation between conference organizer and gender breakdown of speakers or discussion section leaders (Figure 2). In addition, there has been an overall increase in gender parity over the history of the meeting regardless of organizer gender breakdown, including a significant improvement in 2015 by the all-male Chairs of that meeting. Since 2015, the ratio of men and women speakers has been maintained through the subsequent meetings (Figure 3). The ASM likewise observed that since 2015 the need for women conveners to maintain gender parity among invited speakers appeared to disappear [17]. Based on our observations at the Power Hour and throughout the meeting, we believe the representation at this meeting is a reflection of the overall commitment of this community to increasing gender parity, including active consideration of gender balance in speaker selection and use of community input to identify a wide range of qualified speakers. For example, the Women Researchers in Filamentous Fungi and Oomycetes (WRIFFO) GoogleDoc, launched in April 2016, serves as a centralized source for identifying potential women speakers within our research community [30]. This mirrors the findings of Klein et al., indicating that if conference organizers make inclusivity a priority at community meetings, gender parity results [23].
Despite the progress our community has made on this front, individuals continue to face gender-based challenges in their professional lives. On the first day of the IFI meeting, all participants regardless of gender identity were invited to attend the Power Hour to discuss strategies for combatting gender bias.

4. Progress the Fungal Community has Made

Many participants at the IFI were also present at the 2018 Gordon Research Conference on Molecular and Cellular Fungal Biology (MCFB). Findings from the 2018 MCFB Power Hour were disseminated through publication and were used as a starting place for the IFI 2019 Power Hour [31]. Key discussion points raised at the 2018 MCFB Power Hour included unconscious bias, work-life balance, pay-gap balance, sexual harassment, and raising awareness. To build on their conclusions, the following topics were presented to the 2019 IFI Power Hour group for focused discussion:

5. Our Experience with the Event

6. A Need for Strategies and Practical Solutions

Following the group discussion and as the meeting progressed, junior researchers in particular asked for practical tips on how to find allies in their own environment.
Mentorship vs. Sponsorship: A central theme throughout the team and larger group discussions was the role of mentorship in participant success and well-being, echoing the findings of Acton et al. that, among new PIs, those lacking mentors had a more negative outlook overall, and this affected women more strongly than men [14]. However, discussants expressed uncertainty about how to identify mentors and maintain mentorship networks. To help address this, the following points were made:
Building and Maintaining Networks: All young scientists face challenges in their career progression that can be disruptive to mentorship and support networks. For example, 67% of new PIs in the UK had undertaken an international move at least once during their career, and 75% changed department or institution for their first independent post [14]. This can put pressure on support networks and make identifying and maintaining relationships with mentors challenging. The following actions were suggested to help overcome these challenges.

In conclusion, we found that hosting the Power Hour as part of the 2019 GRC IFI meeting was an engaging and educational experience. Participants valued the discussion and overall were happy with the format. Concrete recommendations and feedback from our session as well as other Power Hour sessions can be used to improve and expand the discussion and mentoring of women in science at future GRC as well as other scientific society meetings. These meetings provide a valuable and under-utilized opportunity for intentional and scheduled opportunities for participants to engage in discussion, problem solving, mentoring, and career development skill building as an approach to levelling the playing field for women in STEM. Of course, no single program can tackle this complex and pervasive issue. We believe that multiple approaches are needed, including the engagement of individuals, mentors and principle investigators, institutional and society leadership. Here we specifically focus on the challenges facing women in science that limit career progression and full participation in research. It should be noted that under-representation occurs across multiple axes. While the specific focus of the GRC Power Hour is on women, other groups may also face many of the challenges identified, or face other challenges that could be mitigated by the strategies identified, such as the assessment of unconscious bias, through culture shifts, and through the identification of allies, mentors, and sponsors. The Power Hour is a model program that has been successful in recruiting participation by meeting attendees from a variety of backgrounds and academic and leadership levels. We found the experience of leading the program to be quite valuable and recommend that GRC as well as other scientific societies and meeting organizers consider initiating or expanding these dedicated sessions devoted to issues around disparity.

We acknowledge the GRC for their leadership in this area and for establishing the Power Hour forum. We additionally gratefully acknowledge the contributions of Liise-Anne Pirofski, Jatin Vyas, Melanie Wellington, Kirstin Nielsen, Robin May, Tobias Hohl, Heather Conti, Mairi Noverr, and Teresa O’Meara to the discussion.

The authors declare no conflict of interest. MDPI Pathogens was a sponsor for the GRC IFI and the sponsors had no role in the design, execution, interpretation, or writing of this report.

The Gordon Research Conference (GRC) operates under a strict policy of confidentiality and non-publication. In the case of this report, we have obtained permission from the GRC and from quoted participants to share our observations. 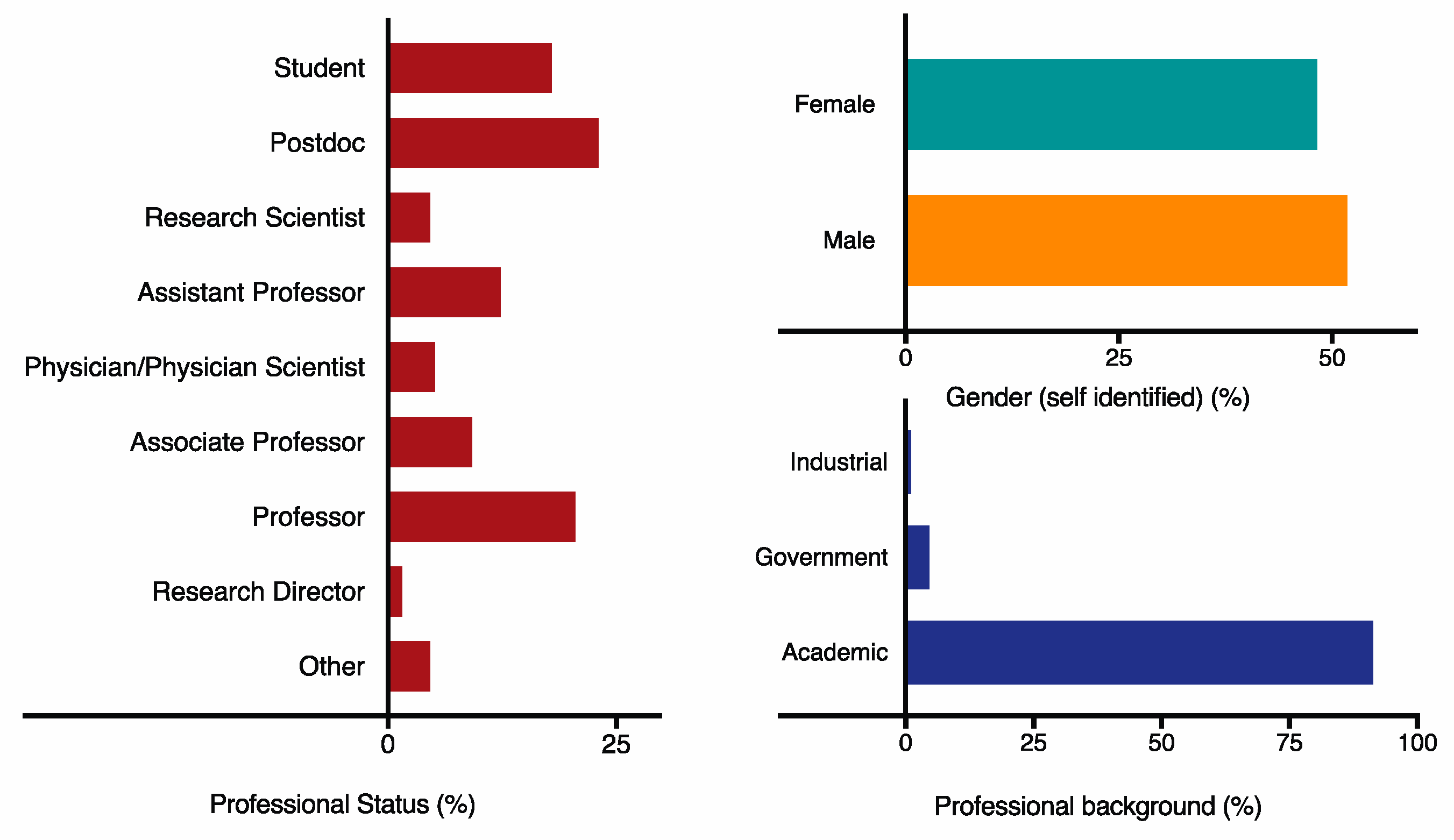