A Quantitative Proteomics View on the Function of Qfhb1, a Major QTL for Fusarium Head Blight Resistance in Wheat

Fusarium head blight (FHB) is a highly detrimental disease of wheat. A quantitative trait locus for FHB resistance, Qfhb1, is the most utilized source of resistance in wheat-breeding programs, but very little is known about its resistance mechanism. In this study, we elucidated a prospective FHB resistance mechanism by investigating the proteomic signatures of Qfhb1 in a pair of contrasting wheat near-isogenic lines (NIL) after 24 h of inoculation of wheat florets by Fusarium graminearum. Statistical comparisons of the abundances of protein spots on the 2D-DIGE gels of contrasting NILs (fhb1+ NIL = Qfhb1 present; fhb1- NIL = Qfhb1 absent) enabled us to select 80 high-ranking differentially accumulated protein (DAP) spots. An additional evaluation confirmed that the DAP spots were specific to the spikelet from fhb1- NIL (50 spots), and fhb1+ NIL (seven spots). The proteomic data also suggest that the absence of Qfhb1 makes the fhb1- NIL vulnerable to Fusarium attack by constitutively impairing several mechanisms including sucrose homeostasis by enhancing starch synthesis from sucrose. In the absence of Qfhb1, Fusarium inoculations severely damaged photosynthetic machinery; altered the metabolism of carbohydrates, nitrogen and phenylpropanoids; disrupted the balance of proton gradients across relevant membranes; disturbed the homeostasis of many important signaling molecules induced the mobility of cellular repair; and reduced translational activities. These changes in the fhb1- NIL led to strong defense responses centered on the hypersensitive response (HSR), resulting in infected cells suicide and the consequent initiation of FHB development. Therefore, the results of this study suggest that Qfhb1 largely functions to either alleviate HSR or to manipulate the host cells to not respond to Fusarium infection. View Full-Text
Keywords: FHB; fhb1; FHB pathogeneses; FHB resistance; fusarium; hypersensitive response; proteomics; scab; wheat FHB; fhb1; FHB pathogeneses; FHB resistance; fusarium; hypersensitive response; proteomics; scab; wheat
►▼ Show Figures 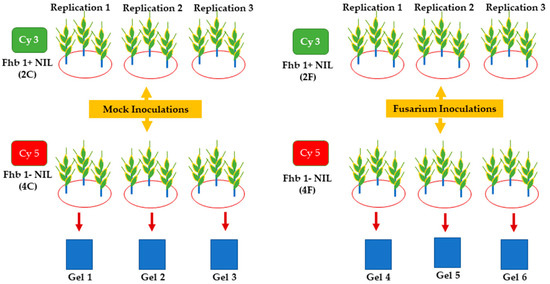