Vertical Transmission of Listeria monocytogenes: Probing the Balance between Protection from Pathogens and Fetal Tolerance
Previous Article in Special Issue

Manipulation of Innate and Adaptive Immunity by Staphylococcal Superantigens

Staphylococcal superantigens (SAgs) constitute a family of potent exotoxins secreted by Staphylococcus aureus and other select staphylococcal species. SAgs function to cross-link major histocompatibility complex (MHC) class II molecules with T cell receptors (TCRs) to stimulate the uncontrolled activation of T lymphocytes, potentially leading to severe human illnesses such as toxic shock syndrome. The ubiquity of SAgs in clinical S. aureus isolates suggests that they likely make an important contribution to the evolutionary fitness of S. aureus. Although the apparent redundancy of SAgs in S. aureus has not been explained, the high level of sequence diversity within this toxin family may allow for SAgs to recognize an assorted range of TCR and MHC class II molecules, as well as aid in the avoidance of humoral immunity. Herein, we outline the major diseases associated with the staphylococcal SAgs and how a dysregulated immune system may contribute to pathology. We then highlight recent research that considers the importance of SAgs in the pathogenesis of S. aureus infections, demonstrating that SAgs are more than simply an immunological diversion. We suggest that SAgs can act as targeted modulators that drive the immune response away from an effective response, and thus aid in S. aureus persistence. View Full-Text
Keywords: Superantigen; Staphylococcus aureus; T cell; Cytokine; Staphylococcal Enterotoxin; Toxic Shock Syndrome Toxin-1 Superantigen; Staphylococcus aureus; T cell; Cytokine; Staphylococcal Enterotoxin; Toxic Shock Syndrome Toxin-1
►▼ Show Figures 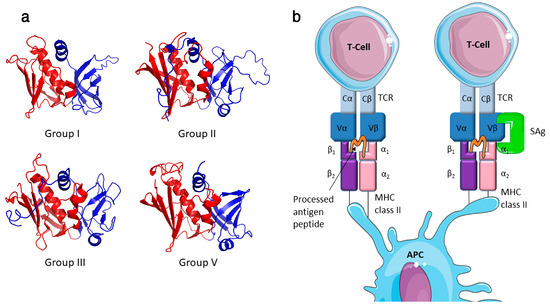