Multifaceted Defense against Listeria monocytogenes in the Gastro-Intestinal Lumen

Listeria monocytogenes: The Impact of Cell Death on Infection and Immunity

Listeria monocytogenes is a Gram-positive facultative intracellular pathogen. Due in large part to its ability to survive in both cold and high-salt conditions, it enters the food chain and can lead to the severe disseminated infection Listeriosis [1]. Following ingestion, L. monocytogenes can invade intestinal epithelial cells, gaining access to the lymphatic system and blood stream, ultimately resulting in dissemination to the liver, spleen, central nervous system, and, in pregnant women, the placenta. Infection causes symptoms ranging from mild gastroenteritis to more severe meningitis and spontaneous miscarriage in the context of disseminated infections [2]. Disseminated listeriosis can result in mortality rates as high as 30% despite antibiotic treatment [2].
Following ingestion and upon entry into a host cell, either through phagocytosis or internalin-dependent receptor mediated endocytosis [3,4], L. monocytogenes utilizes the cholesterol-dependent cytolysin (CDC) listeriolysin O (LLO) to escape the phagosome into the cytosol [5,6]. Once in the cytosol, L. monocytogenes expresses the protein ActA to hijack host actin, thus facilitating cell-to-cell spread [7]. The combination of LLO and ActA results in an almost exclusively intracellular lifecycle during infection, thereby avoiding extracellular host defenses, including complement and neutrophils [8,9,10]. Indeed, loss of either LLO or ActA leads to full attenuation of virulence demonstrating the importance of accessing and maintaining its intracellular niche [5,7]. Furthermore, as discussed throughout this review, L. monocytogenes has developed multiple strategies to maintain host cell viability and avoid triggering both programmed and non-programmed host cell death pathways to promote its virulence.
In addition to being an important human and animal pathogen, L. monocytogenes is also being developed as a novel vaccine platform, particularly in the context of tumor immunotherapy [11]. Due in large part to its constitutive intracellular lifecycle, L. monocytogenes infection naturally triggers robust CD8+ T-cell responses [12]. While the exact mechanisms by which L. monocytogenes triggers cell-mediated immunity remain unclear, its promise as an immunotherapy platform is illustrated by the >15 active or completed clinical trials using attenuated L. monocytogenes for the treatment of a variety of cancers (http://clinicaltrials.gov). L. monocytogenes naturally targets antigen-presenting cells during infection and, due to it cytosolic localization, delivers antigens directly to the class I major histocompatibility complex (MHC) presentation pathway. L. monocytogenes is also highly genetically tractable, facilitating both pathogen attenuation for clinical safety and the ability to engineer the pathogen to express tumor antigens of interest [11]. Two different L. monocytogenes-based immunotherapeutic platforms from Advaxis and Aduro Biotech take advantage of the long standing observation that while cytosolic access is necessary for triggering cell mediated immunity, cell-to-cell spread of the pathogen is not, thereby ensuring vaccine safety [13,14]. Understanding how cell death influences immunity in the context of L. monocytogenes infection is important to optimize these platforms for the generation of robust cell-mediated immune responses.
L. monocytogenes infection impacts a variety of different host cell death pathways, including both programmed and non-programmed cell death. In this review, we will discuss the influences of host cell death pathways, including necrosis and necroptosis, apoptosis, and inflammasome-mediated pyroptosis on both L. monocytogenes virulence as well as L. monocytogenes-induced immunity. We will highlight the ways in which these responses are triggered and the mechanisms used by L. monocytogenes to manipulate activation of cell death. Understanding how cell death influences both acute infection and L. monocytogenes triggered cell-mediated immunity could provide critical insights into novel therapeutics for the treatment of infection, as well as the development of vaccine strains as cancer immunotherapies.

In summary, cell death has potent impacts on the outcomes of infections, particularly in the context of exquisitely adapted intracellular pathogens such as L. monocytogenes. In most cases, host cell death is protective and L. monocytogenes has evolved ways to avoid activation of these pathways through regulation of their virulence factors. Whether L. monocytogenes has specific virulence factors to directly modulate cell death pathways is an outstanding question, but as more cell death pathways, such as necroptosis, are discovered, that possibility becomes more and more likely. The exception to the cell death avoidance model is the activation of bystander apoptosis of lymphocytes. Importantly, this form of cell death does not directly eliminate a replication niche and in fact appears to be detrimental to the host and beneficial to the pathogen, fueling the longstanding, speculative, but exciting hypothesis that L. monocytogenes promotes type I interferon responses to create an immunosuppressive environment to enhance virulence. Finally, our understanding of how cell death influences the generation of adaptive immune responses is still in its infancy. The classic dogma of immunogenic necrosis and tolerogenic apoptosis has been turned on its head, even in the context of sterile immunity. How these pathways influence immunity in the context of infection is a future frontier. Furthermore, as more novel cell death pathways continue to be discovered, their interactions with the innate and adaptive immune systems will have to be understood in order to refine our use of bacteria such as L. monocytogenes as beneficial microbes in the context of vaccines and tumor immunotherapy.

This work was supported by National Institutes of Health National Cancer Institute (R01CA188034).

CEM and JDS equally contributed to the conceptualization and execution of this review. 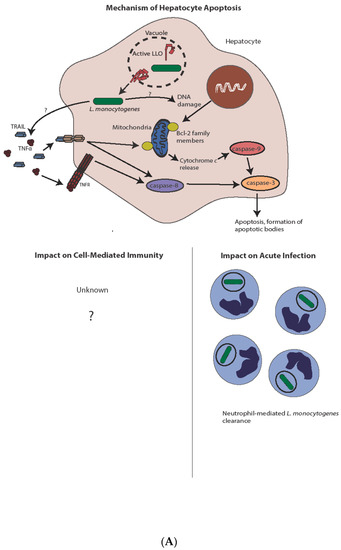 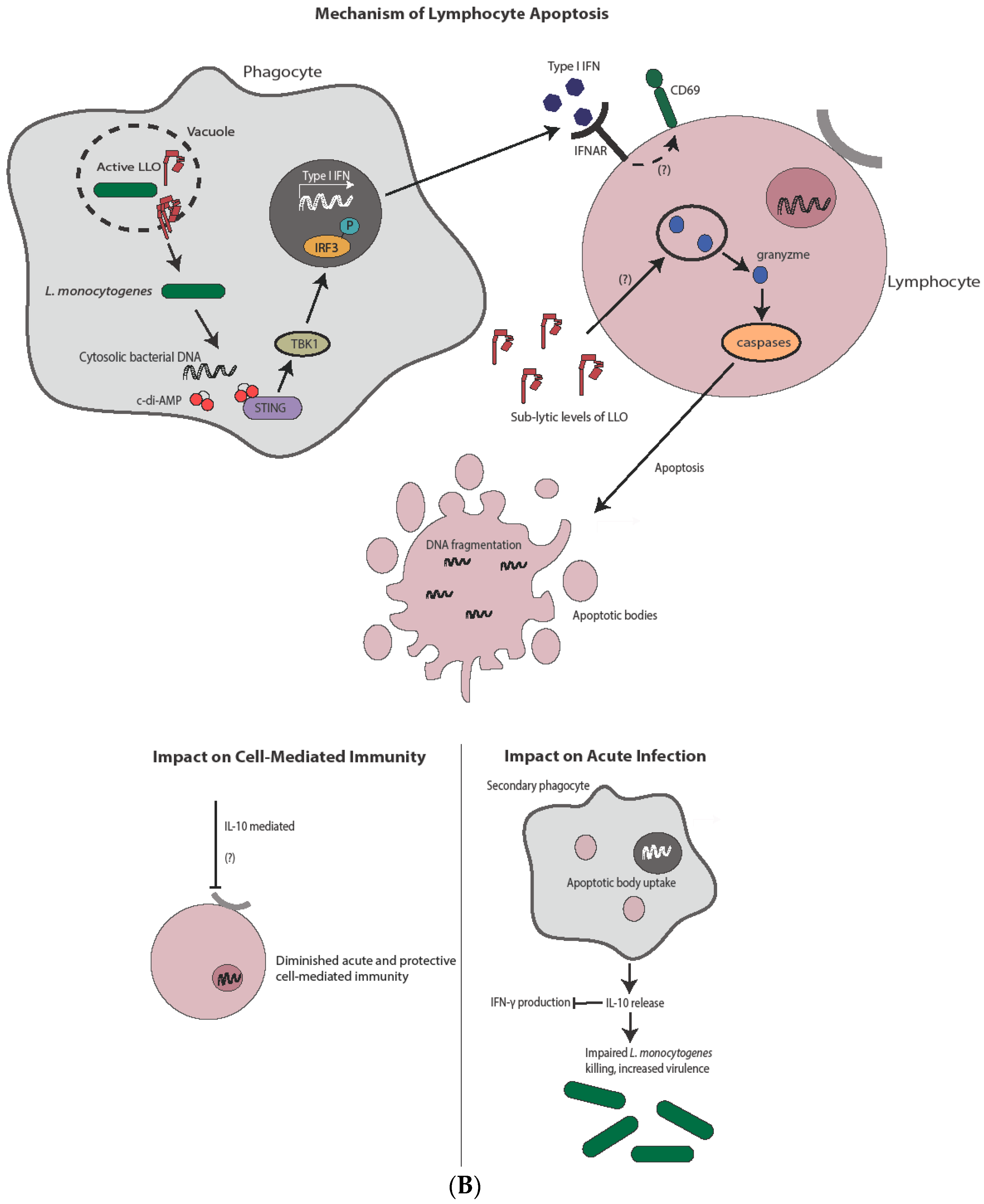