Distribution of Type I Restriction–Modification Systems in Streptococcus suis: An Outlook
Next Article in Special Issue

How to Meet the Last OIE Expert Surveillance Panel Recommendations on Equine Influenza (EI) Vaccine Composition: A Review of the Process Required for the Recombinant Canarypox-Based EI Vaccine
Previous Article in Journal

The Influenza NS1 Protein: What Do We Know in Equine Influenza Virus Pathogenesis?

Equine influenza virus (EIV) is considered the most important respiratory pathogen of horses as outbreaks of the disease lead to substantial economic losses. The H3N8 EIV has caused respiratory disease in horses across the world, including South American countries. Nucleotide and deduced amino acid sequences for the complete haemagglutinin gene of the H3N8 EIV detected in South America since 1963 were analyzed. Phylogenetic and Bayesian coalescent analyses were carried out to study the origin, the time of the most recent common ancestors (tMRCA), the demographic and the phylogeographic patterns of the H3N8 EIV. The phylogenetic analysis demonstrated that the H3N8 EIV detected in South America grouped in 5 well-supported monophyletic clades, each associated with strains of different origins. The tMRCA estimated for each group suggested that the virus was circulating in North America at least one year before its effective circulation in the South American population. Phylogenetic and coalescent analyses revealed a polyphyletic behavior of the viruses causing the outbreaks in South America between 1963 and 2012, possibly due to the introduction of at least 4 different EIVs through the international movement of horses. In addition, phylodynamic analysis suggested South America as the starting point of the spread of the H3N8 EIV in 1963 and showed migration links from the United States to South America in the subsequent EIV irruptions. Further, an increase in the relative genetic diversity was observed between 2006 and 2007 and a subsequent decline since 2009, probably due to the co-circulation of different lineages and as a result of the incorporation of the Florida clade 2 strain in vaccines, respectively. The observed data highlight the importance of epidemiological surveillance and the implementation of appropriate quarantine procedures to prevent outbreaks of the disease. View Full-Text
Keywords: equine influenza; South America; haemagglutinin; phylodynamics; phylogeography equine influenza; South America; haemagglutinin; phylodynamics; phylogeography
►▼ Show Figures 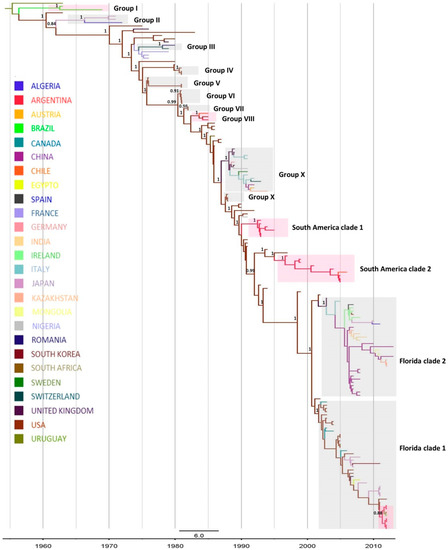