Pneumonic tularemia is a highly debilitating and potentially fatal disease caused by inhalation of Francisella tularensis. Most of our current understanding of its pathogenesis is based on the highly virulent F. tularensis subsp. tularensis strain SCHU S4. However, multiple sources of SCHU S4 have been maintained and propagated independently over the years, potentially generating genetic variants with altered virulence. In this study, the virulence of four SCHU S4 stocks (NR-10492, NR-28534, NR-643 from BEI Resources and FTS-635 from Battelle Memorial Institute) along with another virulent subsp. tularensis strain, MA00-2987, were assessed in parallel. In the Fischer 344 rat model of pneumonic tularemia, NR-643 and FTS-635 were found to be highly attenuated compared to NR-10492, NR-28534, and MA00-2987. In the NZW rabbit model of pneumonic tularemia, NR-643 caused morbidity but not mortality even at a dose equivalent to 500x the LD50 for NR-10492. Genetic analyses revealed that NR-10492 and NR-28534 were identical to each other, and nearly identical to the reference SCHU S4 sequence. NR-643 and FTS-635 were identical to each other but were found to have nine regions of difference in the genomic sequence when compared to the published reference SCHU S4 sequence. Given the genetic differences and decreased virulence, NR-643/FTS-635 should be clearly designated as a separate SCHU S4 substrain and no longer utilized in efficacy studies to evaluate potential vaccines and therapeutics against tularemia. View Full-Text
Keywords: Francisella tularensis; SCHU S4; attenuation; virulence; substrain; rats; rabbits Francisella tularensis; SCHU S4; attenuation; virulence; substrain; rats; rabbits
►▼ Show Figures 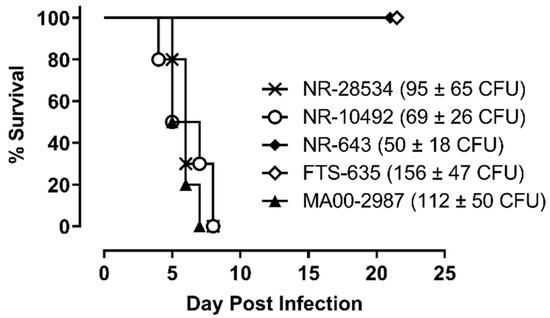