Arthrobacter woluwensis is a Gram-positive, aerobic Actinobacteria that is widely distributed in the environment, mainly in soil, and it sometimes represents the majority of single bacterial groups in aerobic plate counts of soil specimens [1]. Arthrobacter strains have relatively low pathogenic potential but they can be pathogenic to immunocompromised hosts. Arthrobacter spp. was first considered as a Corynebacterium in 1896 when the species Corynebacterium was first proposed, but it was later assessed to be a distinct species [2]. Considering its rarity and similarity to other corynebacteriae, it is commonly mis-identified in culturing by commercial kits, thus, proper identification often requires assistance from molecular biological methods, such as chemotaxonomic methods or ribosomal RNA/DNA sequencing. To the best of our knowledge, only six cases of bacteremia related to Arthrobacter woluwensis have been reported to date [1,3,4,5,6,7].
Here, we present a case of a newly diagnosed gastric cancer patient who suffered from Arthrobacter woluwensis bacteremia during their hospital admission.

A 93-year-old man received total gastrectomy, D1 lymph node dissection, and Roux-en-Y anastomosis due to adenocarcinoma of the stomach and developed a postoperative wound infection. Blood culture from peripheral blood yielded unidentified Gram-positive bacillus. The strain was designated as QTS. Antimicrobial susceptibility testing of the isolate was performed with VITEK2 (bioMérieux) and the strain was susceptible to penicillin, vancomycin, trimethoprim/sulfamethoxazole (TMP/SMX), and resistant to ciprofloxacin, clindamycin, and gentamicin. E test MIC values of penicillin, vancomycin, amikacin and daptomycin were 0.75 µg/mL, 1.0 µg/mL, 2 µg/mL and 3 µg/mL.

One colony of trypticase soy agar with 5% sheep blood was transferred into 5 mL of Müller–Hinton medium and incubated overnight at 37 °C. DNA isolation was done according to the manufacturer’s specifications with the QIAGEN Genomic-tip 100/G100 kit and the Genomic DNA Buffer (Gentra Bio, Paisley, UK), measuring the DNA concentration with a Qubit 2.0 fluorometer (Life Technologies, Carlsbad, US). The QTS whole genome was sequenced by Oxford Nanopore GridION using R9.4 flow cell at 122x coverage. The raw signals were basecalled by Guppy 3.4 into long reads. The adaptors that remained in the long reads were trimmed by Porechop. These clean reads were assembled by Flye v. 2.6 into a circular chromosome of 3.68 Mbp. The sequencing errors left on the genome were polished by four runs of Racon, one run of Medaka, and finally, one run of Homopolish. The resulting genome nearly reached 100% CheckM completeness. The protein-coding genes in the QTS genome were annotated via the NCBI Prokaryotic Genome Annotation Pipeline (PGAP). Virulence factors in the genome were identified by DIAMOND alignment against the virulence factor database (VFDB). Whole-genome average nucleotide identity (ANI) was computed by OrthoANI. The phylogeny of QTS and other related genomes was reconstructed by MEGA X. The circular comparative genome map was plotted by Circos.

The information regarding gene sequencing and assembly is summarized in Table 1. The genomic contents of the QTS genome are illustrated in Figure 1. The phylogenetic tree based on the 16S rRNA sequence and ANI was constructed to show the phylogenetic position of A. woluwensis QTS (Figure 2). A. woluwensis QTS is closely related to other A. woluwensis strains in terms of nucleotide sequences, sharing an ANI > 96%. As shown in Figure 3, the alignment revealed an obvious syntenic relationship between strains QTS and DSM 10495. Candidate virulence genes are presented in the Supplementary Materials, Table S1, including urease operon. Common subunits of the urease system were identified, including ureA, ureC, ureD, ureE, ureF and ureG [8].

Pubmed was used to search the literature published before March 2021 with the keywords: Arthrobacter woluwensis, Arthrobacter, and bacteremia. The characteristics of patients, diagnosis, treatment and outcome are summarized in Table 2.
Four of six patients in the literature review demonstrated features of poor immunity, including AIDS, terminal colon cancer, extreme old age and multiple myeloma under chemotherapy treatment. In 3 of 5 patients, a central venous catheter was in place when bacteremia occurred. Case 3 and 6 were intravenous drug users and vulnerable to bloodstream infection.
The antimicrobial susceptibility is summarized in Table 3. Most isolates showed sensitivity to vancomycin, teicoplanin, tetracycline and showed resistance to penicillin, cephalosporin, gentamicin and ciprofloxacin.
In the literature review, patients with immunocompromised status and central venous catheter insertion were vulnerable to A. woluwensis bacteremia. Arthrobacter strains have been isolated from aqueous/vitreous fluid [9], placenta [10], inguinal lymph node [11], implantable cardioverter defibrillator cultures [12], wound swab [13], urine, cervix, vaginal swab, neck abscess [14], and peritoneal dialysis fluid [15]. A. cumminisii and A. oxydans were the most common species found in human clinical specimens [14]. Despite being found in various organs in the human body, they rarely cause infections, indicating the low pathogenicity of Arthrobacter spp.
In the present study, commercial kits failed to identify Arthrobacter spp. Further phenotypic features and genotyping methods may help with more precise identification. Due to the lack of precision of the identification methodologies, the true incidence of infection caused by Arthrobacter spp. may be underestimated.
The patients mentioned in the literature were treated successfully with ampicillin, vancomycin, linezolid, and teicoplanin. However, MIC results were variable and antibiotic resistance to β-lactam and ciprofloxacin was found. Relatively high vancomycin MIC was observed in some isolates. Empirical therapy for these cases can be challenging before MIC results are available. In most of the patients, a central venous catheter was in place when A. woluwensis bacteremia occurred. Multidimensional central-line bundle care and catheter removal may be an essential measure in the prevention and treatment of A. woluwensis-related infection. It was reported that central line-associated bloodstream infection was significantly reduced by 12.2% after care bundle implementation in intensive care units in Taiwan [16].
Urea hydrolysis has been observed in Arthrobacter woluwensis isolates in previous reports [1,3,4,6] and in some other Arthrobacter spp. [1,17]. Previous studies have reported that bacterial urease and associated proteins were encoded by ureA, ureB, ureC, ureD, ureE, ureF and ureG, as shown in Figure 4 [8]. UreC gene was found in the isolate of this report. Friedrich et al. reported ureC gene was more frequent among Shiga toxin-producing E. coli (STEC). The clinical STEC isolates contained ureC but seldom expressed urease activity [18]. Urease is an important factor for Helicobacter pylori colonization in human gastric mucosa [19]. Hence, ureC gene could be used for H. pylori detection and was a potential target for vaccine production and therapeutic antibody [20,21,22]. The association between urease genes and the virulence of Arthrobacter spp. is still unclear.

Here, we report a case of Arthrobacter woluwensis bacteremia in an immunocompromised host treated successfully with ampicillin and catheter removal in Taiwan. Whole genome sequencing identified common subunits of the urease system.

The study was conducted according to the guidelines of the Declaration of Helsinki, and approved by the Institutional Review Board of Taichung Veterans General Hospital (CE210007A).

This Whole Genome Shotgun project has been deposited at GenBank under the accession CP049819.

We would like to thank Pan Lee for the support in Tokyo. 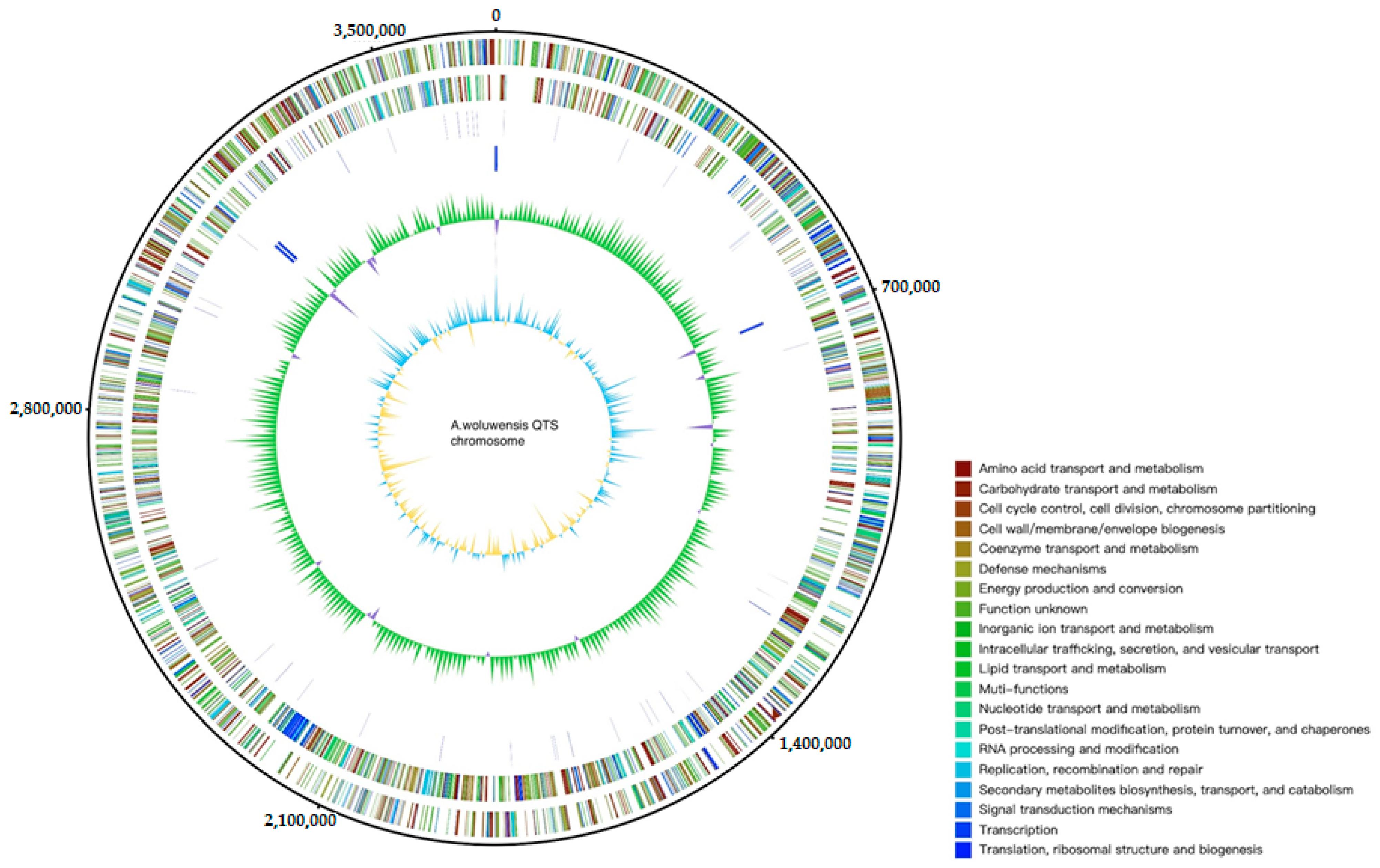