Experimental Study of the Potential Role of Salmonella enterica subsp. diarizonae in the Diarrhoeic Syndrome of Lambs
Previous Article in Journal

Apicomplexan Protozoa Responsible for Reproductive Disorders: Occurrence of DNA in Blood and Milk of Donkeys (Equus asinus) and Minireview of the Related Literature

A number of studies have reported that there is a high prevalence of antimicrobial-resistant faecal bacteria excreted by dairy calves. Although faecal shedding is influenced by a variety of factors, such as the environment and calf age, feeding milk with antimicrobial residues contributes significantly to an increased prevalence of antimicrobial-resistant (AMR) bacteria, such as extended spectrum beta-lactamase (ESBL)-producing E. coli. As a follow-up to the European Food Safety Authority (EFSA) Scientific Opinion on the risk of AMR development in dairy calves published in January 2017, this review aims to illustrate more recent research in this area, focusing on the period 2016 to 2020. A total of 19 papers are reviewed here. The vast majority assess the commensal faecal bacteria, E. coli, isolated from dairy calves, in particular its antimicrobial-resistant forms such as ESBL-producing E. coli and AmpC-producing E. coli. The effect of waste milk feeding on the prevalence of pathogens such as Salmonella spp. has also been investigated. Current research findings include positive effects on daily liveweight gain and other advantages for calf health from feeding waste milk compared to milk replacer. However, the negative effects, such as the demonstrable selection for antimicrobial-resistant bacteria, the shift in the intestinal microbiome and the possible negative consequences that these could have on global public health, should always be taken into consideration. View Full-Text
Keywords: cattle; antimicrobial resistance; mastitis; dairy; Escherichia coli; veterinary public health; waste milk; antibiotics cattle; antimicrobial resistance; mastitis; dairy; Escherichia coli; veterinary public health; waste milk; antibiotics
►▼ Show Figures 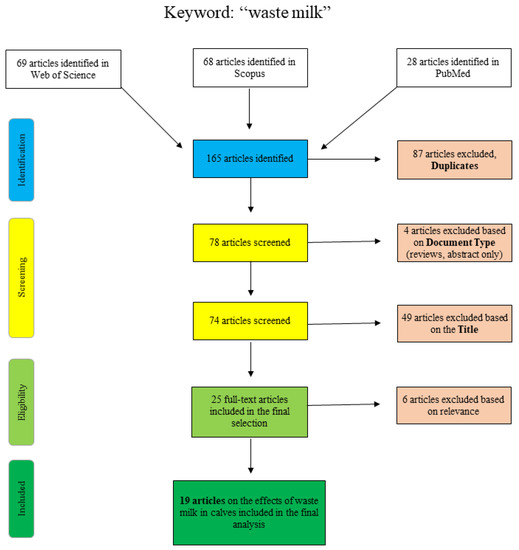