Global Health Diplomacy Amid the COVID-19 Pandemic: A Strategic Opportunity for Improving Health, Peace, and Well-Being in the CARICOM Region—A Systematic Review

Research has shown that low openness and low transparency in the process of recruitment of new (associate) professors put women at a systematic disadvantage. Examples include professorships awarded by direct invitation (as opposed to job calls); contexts where nominally open job calls routinely get only one applicant; and procedural rules that allow the filtering out of qualified applicants without sharing the grounds of the decision with the candidates. We investigated one decade (2007–2017) of hiring of new (associate) professors in one Faculty at the largest university in Norway, the Norwegian University of Science and Technology (NTNU) (n = 79). The Faculty is a highly gender-equal setting, in that the share of women among associate professors has been >40% for over a decade. We found (1) a high share (about 40%) of women among applicants, maintained among winners; (2) a very sporadic use of direct invitations (two in a decade) and no sign that their use advantages men; (3) no nominally ‘open’ job calls with only one applicant; (4) no disadvantage for women when the pool of applicants is small; (5) no systematic filtering out of women when low-transparency internal formal preselection procedures are used because of organizational contingencies (e.g., a high number of applicants). We found an overall high degree of openness in the selection procedure when compared to other Scandinavian and Western European studies. Contrary to our expectations (based on the relevant literature), we found no link between low openness in the selection process and gender inequality in the outcome. The latter finding must be interpreted in context. We conclude that the overall good gender balance locally is an antidote to the potential biasing effect of low-openness and low-transparency procedures, so long as such procedures are used only exceptionally, and their use is clearly tied with organizational contingencies. At the same time, we found no indication that low-openness and low-transparency procedures systematically advantage women. View Full-Text
Keywords: sociology; decision-making; academic recruitment; gender equality; organizations; work; Norway sociology; decision-making; academic recruitment; gender equality; organizations; work; Norway
►▼ Show Figures 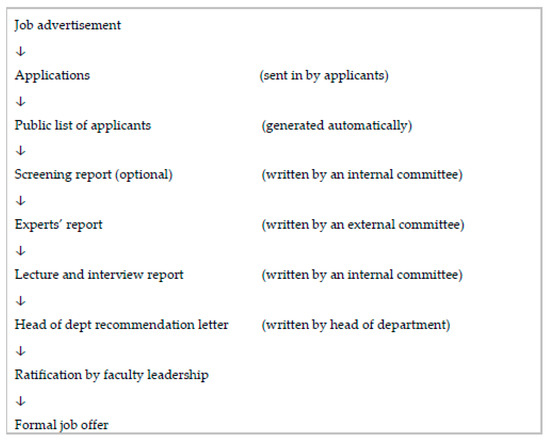