Geogrids are one of the polymeric materials classified under geosynthetics materials and are mainly made from polymers, such as polyester, polyethylene, and polypropylene [1]. Compared to the soil, geogrids are strong in tension. This characteristic enables them to transfer the tension force to a larger area of soil. Geosynthetics are used as a stabilization and reinforcement element in special infrastructure and civil works [2]. Recently, the use of geogrids as reinforcing material is expanding towards the pavement system, especially in the following fields: Reinforcing elements for asphalt layers, stabilizing the unbound layers [3], as an interlayer system in overlay applications [4], as shrinkage reinforcement in Portland cement concrete pavements [5], and as an interlayer system to reduce reflective cracking in concrete overlays [6,7] or asphalt overlays of jointed concrete pavements [8,9]. The use of geogrids as reinforcement material for the Portland cement concrete constitute a new dimension for using geogrids in structural engineering. Little researches have been performed on geogrids used as reinforcement material in Portland cement concrete thin members and overlays [10]. Meanwhile, few types of research have been performed on geogrids used, either for the strengthening of concrete beams and slabs [1,11], as reinforcement materials for concrete slabs [12,13], or as reinforcement materials for concrete beams [14,15]. Geogrids are categorized into uniaxial geogrids, biaxial geogrids, and triaxial geogrids. Uniaxial geogrids are used in grade separation applications, such as steep slopes. In contrast, biaxial geogrids are used in roadway implementations, and triaxial geogrids are used in road construction where the soil under the road is sandy or loose [16]. Uniaxial geogrids are formed by extending a regularly punched polymer sheet in the longitudinal direction, and in this manner, the longitudinal direction retains a higher tensile strength than the transverse direction. Biaxial geogrids are formed by extending a consistently punched polymer sheet in longitudinal and transverse directions simultaneously, and in this manner, the tensile strength is equivalent in both directions. Triaxial geogrids are fabricated from a punched polypropylene sheet arranged in numerous, symmetrical bearings to shape its triangular openings, bringing about high radial stiffness all through the full 360 degrees. The objective of this investigation is to analyze the flexural behavior of steel-reinforced concrete slabs when hybrid reinforced with varying grades and layers of geogrids. In order to quantify the gained benefits from the application of geogrids as concrete slab reinforcement, a comparative study of flexural test results between concrete control slab and understudy concrete slabs were studied and analyzed. This paper represents a discussion of the test results and reports significant findings.

Highlights of the Paper

Main Conclusions of the Literature Review

Various studies of literature regarding the use of geogrids as concrete reinforcement and similar works were collected and reviewed. From the above literature review, we have observed the following results:

3. Specifications of the Used Materials

The concrete mix was prepared by using Portland cement with a grade of 42.5, natural sand as fine aggregate, and crushed limestone as coarse aggregate. Table 1 shows the mix design of the used concrete. The maximum nominal size of coarse aggregate is limited to 10 mm, which is smaller than the size of the apertures of the used geogrids to allow the coarse aggregate to pass and fill the spaces between the geogrids’ ribs, to avoid the honeycombing of concrete, and to provide better bonding between the concrete and geogrids. High range water reducing and super-plasticizer concrete admixture was used to improve the workability of concrete, while keeping the water-cement ratio as 0.5. The concrete mixture has a 28-days compressive strength of 40 N/mm2.
Because the slabs under this study are one-way slabs, the biaxial geogrids were excluded. The used concrete reinforcement materials in the research were reinforcement steel bars, uniaxial geogrids, and triaxial geogrids. The reinforcement steel bars’ properties as per experimental tests are shown in Table 2. The physical and mechanical properties of the used geogrids, as provided by the manufacturer and experimental tests, are shown in Figure 1, Table 3, and Table 4.

All slabs were loaded and tested under gradually increasing four-point loading by Shimadzu machine with a capacity of 500 kN until they failed in flexure (loading protocol is a displacement control of 2 mm per minute). Each two-line load was applied at one-third of the clear span to provide a constant maximum bending moment and zero shear force in the middle third of the concrete slabs. Two roller-steel supports were used; each one was located at a distance of 7.5 cm from the slab end. Three vertical linear variable differential transducers (LVDTs) were fixed to the slabs to measure the deflection at the mid-span and in places where concentrated forces are applied. A computerized data logger was used to record the measurements of the machine load, the three vertical linear variable differential transducers (LVDTs), and the bottom reinforcement strain gauges. Figure 4 shows the Shimadzu machine, the computerized data logger, and the test set-up details. 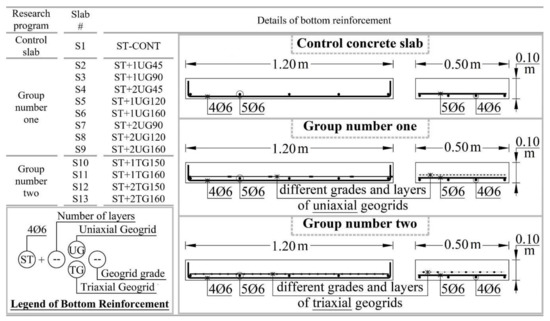 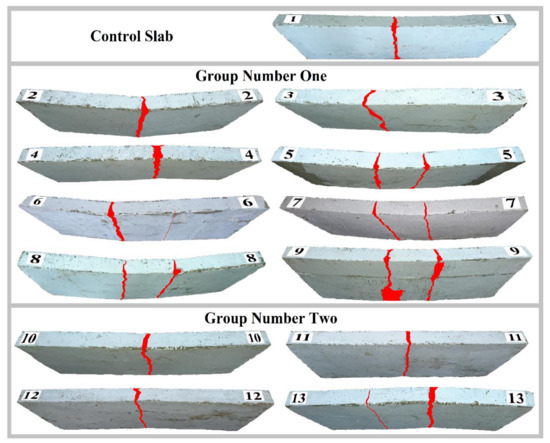 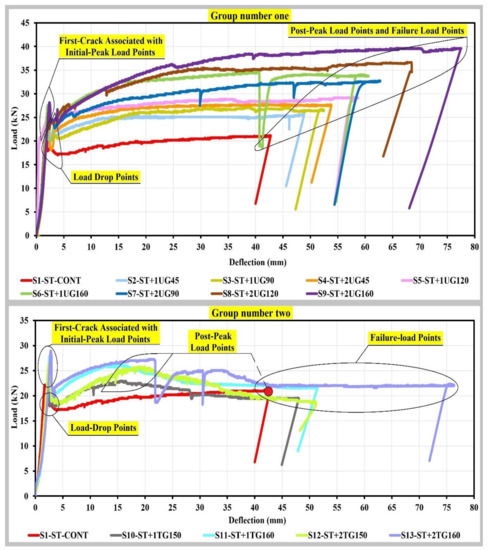 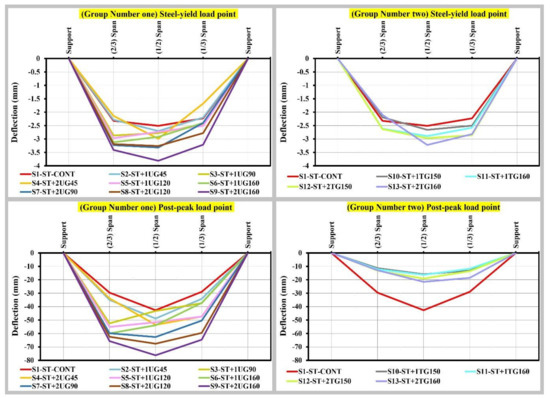 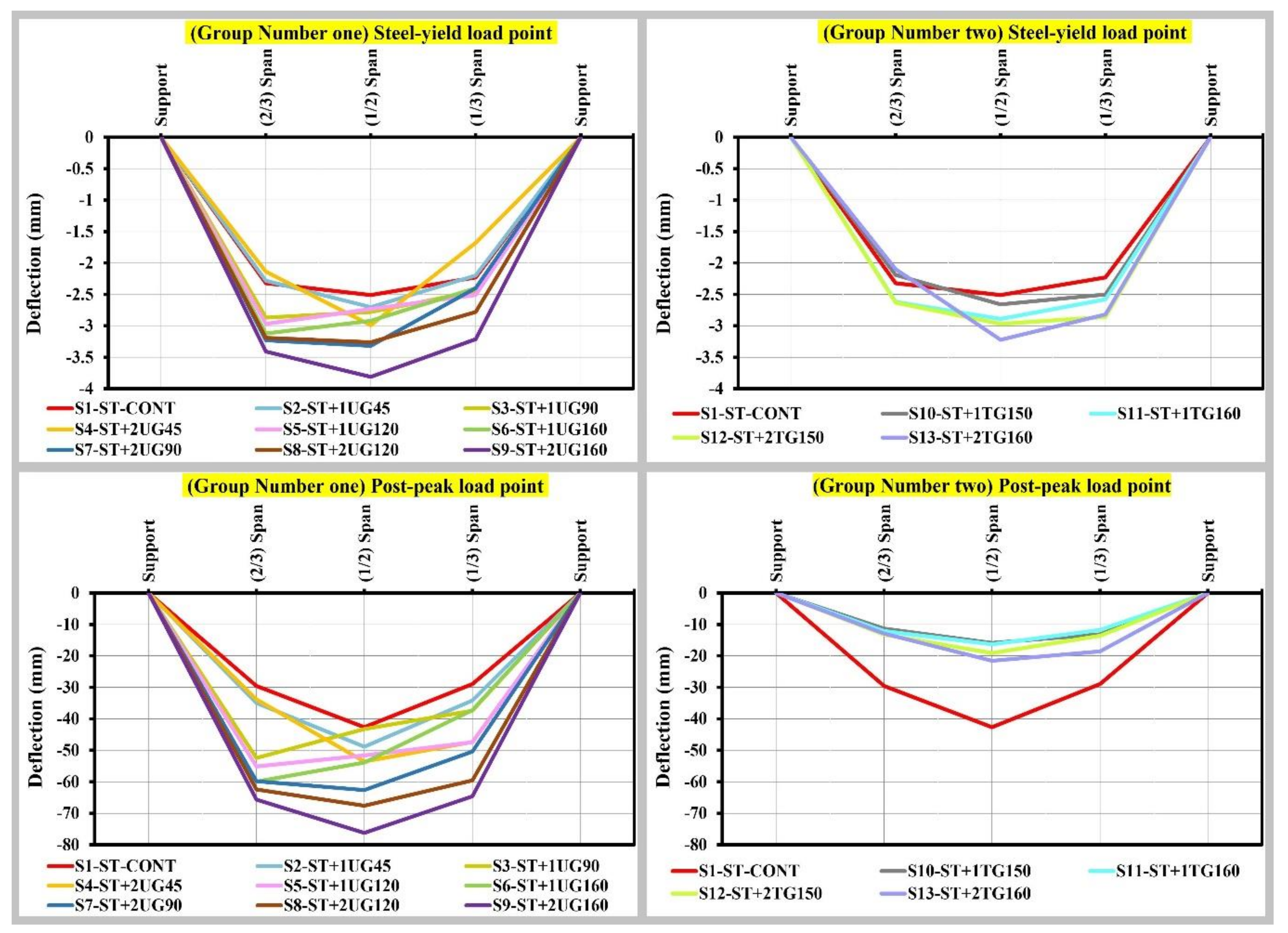 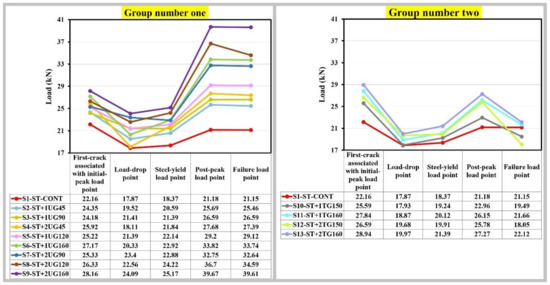 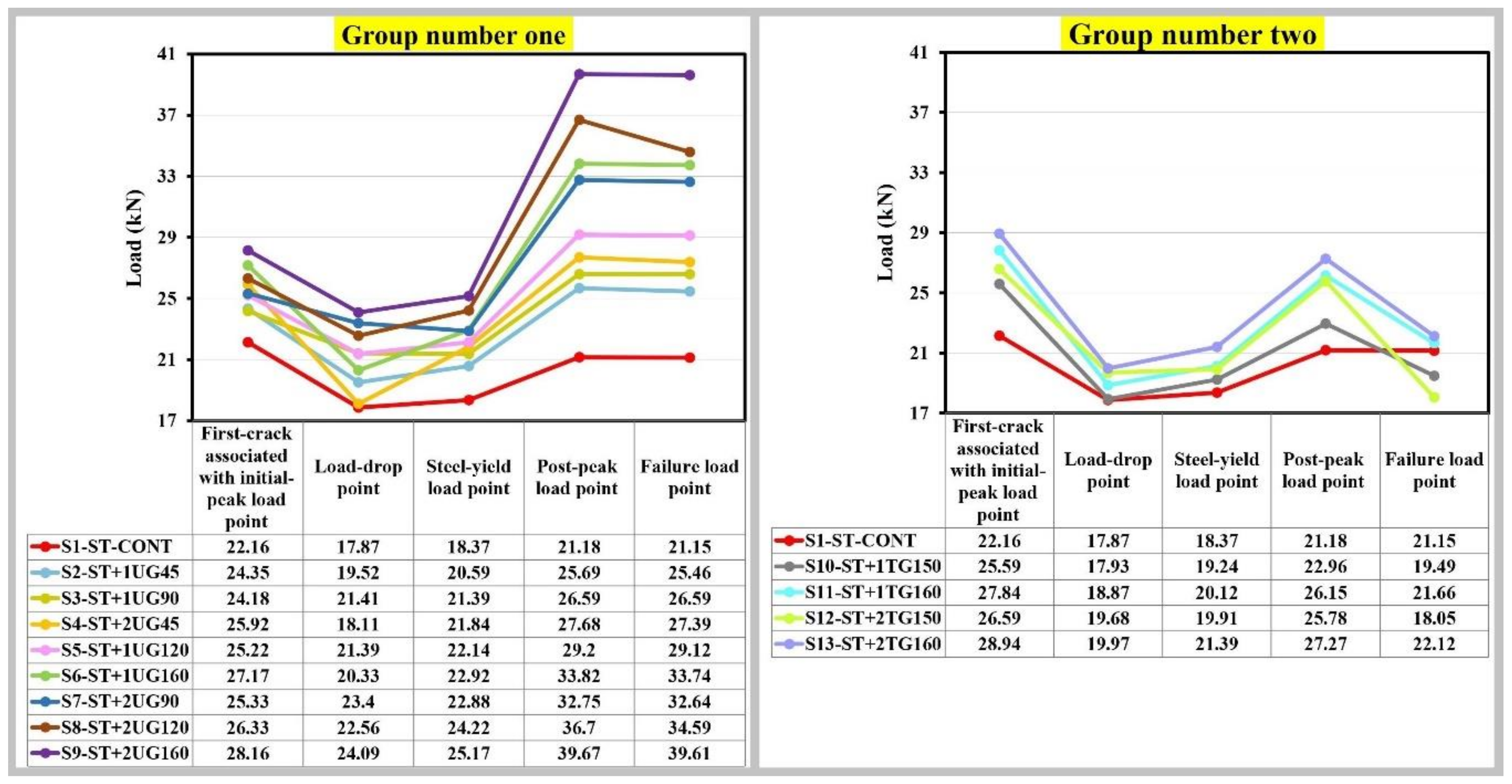 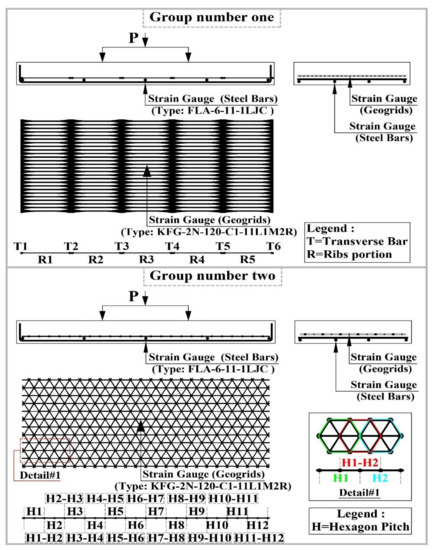 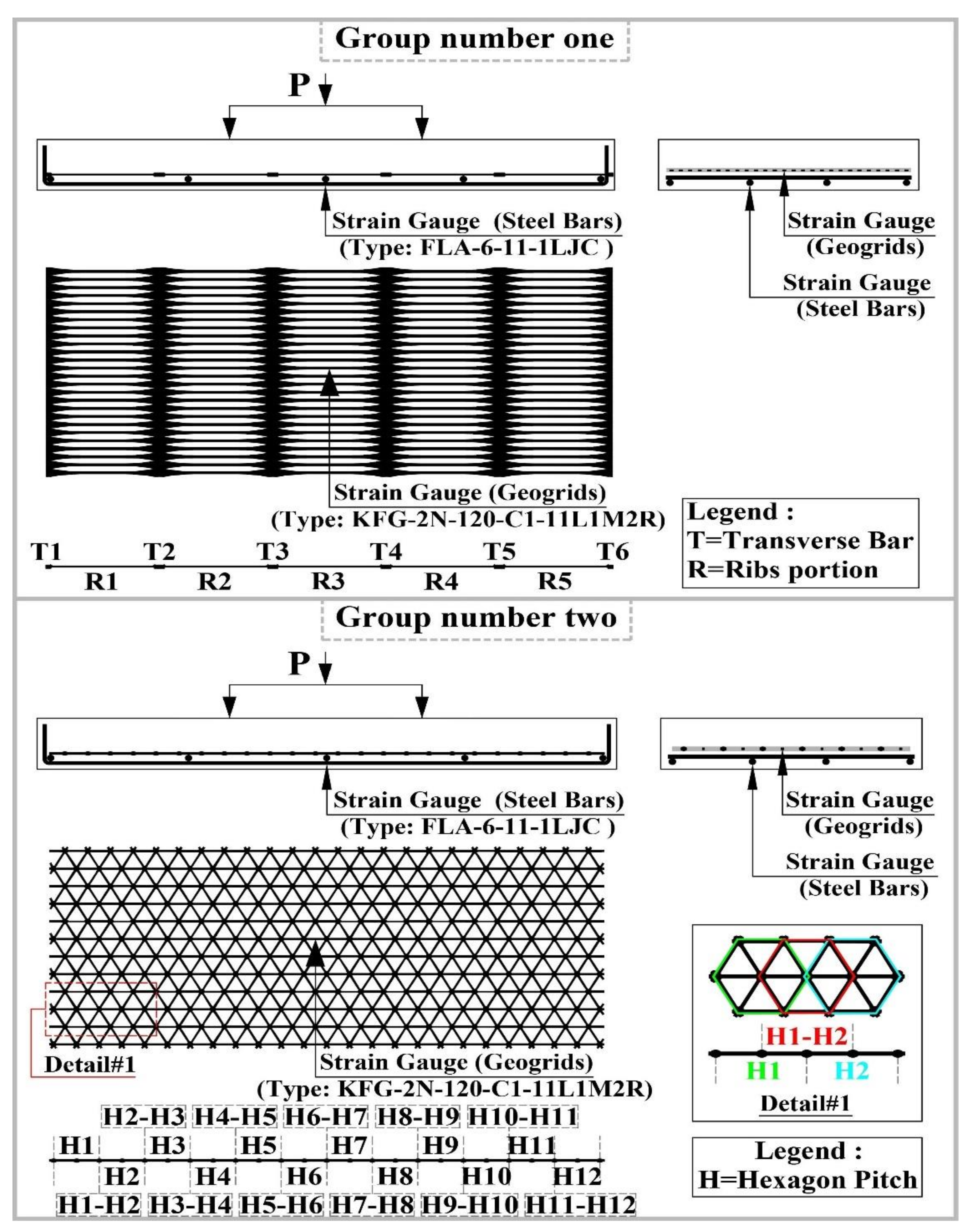 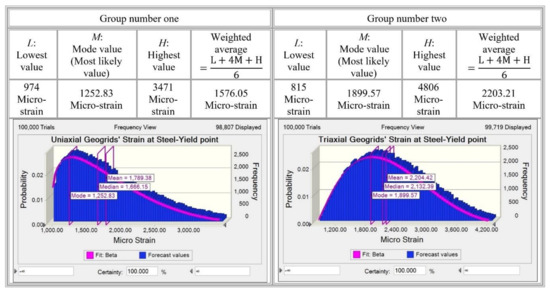 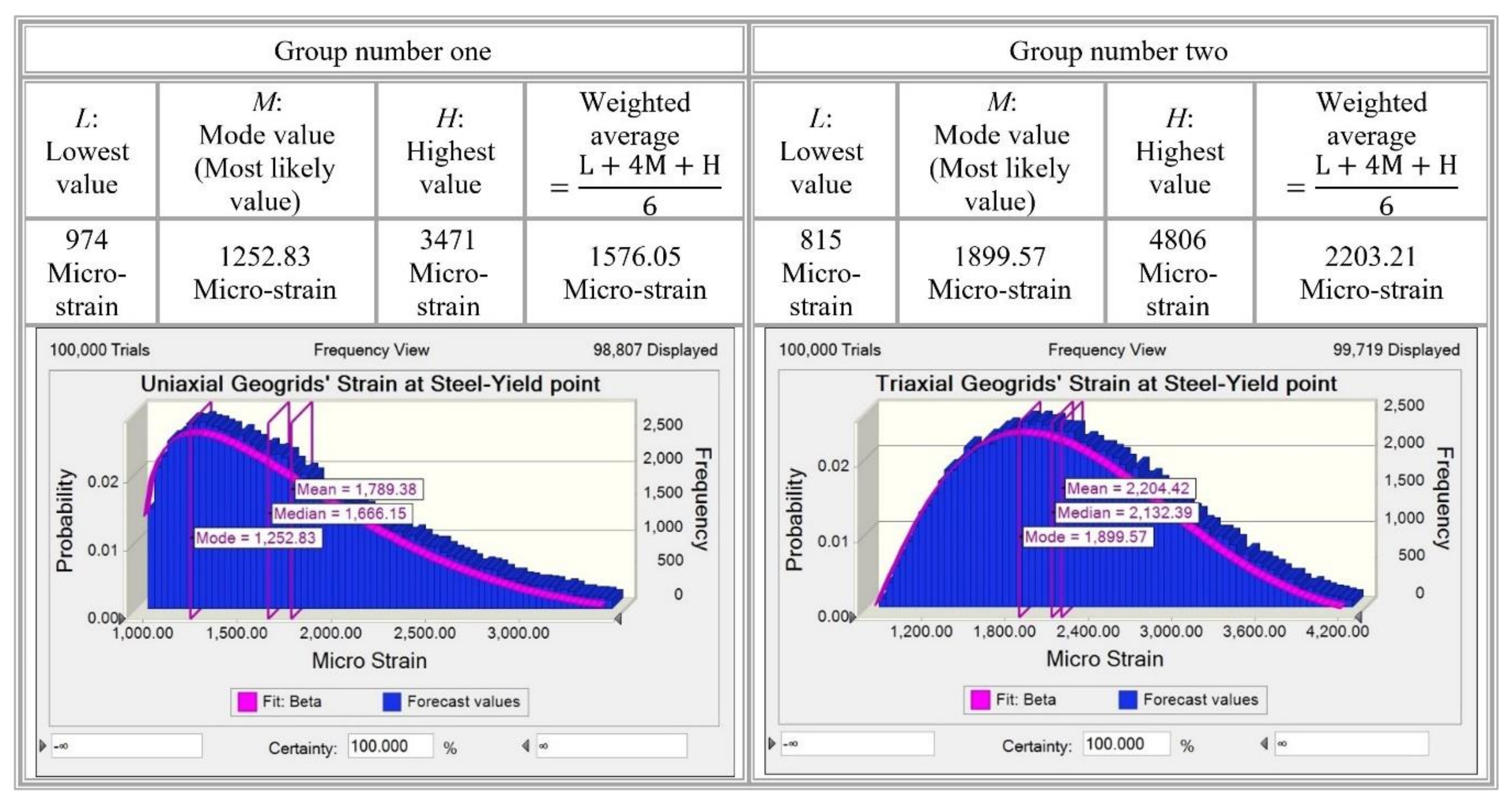