This paper presents a numerical analysis of the load-carrying capacity of steel open-section columns of a coal power plant structure. The structure was subjected to soil subsidence, which led to considerable structural deformations and damages. As a result, additional stresses appeared in the structure, and the static scheme of the structure was changed. To assess the influence of structural changes on the safety of the structure, a detailed investigation was necessary. Laser scanning was used to collect information concerning the geometry of structural elements. Results of the scanning were implemented in a numerical model of the structure. A complex finite element method (FEM) shell model of the column in ABAQUS software was developed. Torsional buckling stability analysis of column members was carried out. Different boundary conditions depending on the type of column connections to other elements were considered. Torsional deformations were treated as imperfections. Analysis showed that the connections of bracing elements, e.g., beams in multilevel frame, directly affected the collapse mechanism and load-bearing capacity of the investigated element. Finally, the paper showed that an appropriate change in the connections between the analyzed column and multilevel frame beams prevents the column from twisting, thereby increasing the critical force and load-bearing capacity of the analyzed industrial structure. View Full-Text
Keywords: torsional buckling; point cloud; critical load; FEM torsional buckling; point cloud; critical load; FEM
►▼ Show Figures 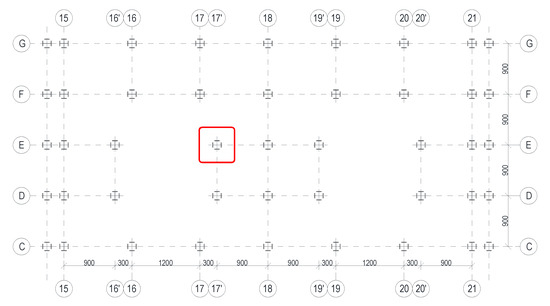